LILONGWE, Feb 23 2010 (IPS) - By this time last year, Mkanda had recorded 14 cholera cases as rainy season descended on central Malawi. This year, there has not been a single report of cholera. 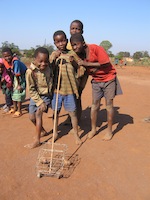 “There has been a reduction in open defecation. The people of Mkanda have fully adopted the Community-Led Total Sanitation (CLTS) approach where they are discouraging the common practice of defecating in the open,” said Thomas Mchipha, Water, Sanitation Health and Environment Coordinator for Mchinji district.

CLTS is an initiative where locals come together and build pit latrines using locally-available materials like grass and clay. The communities also set by-laws that are used to ensure that people are adhering to using latrines.

Mchipha explains that the communities have come to realise that open defecation results in the spread of water-borne diseases such as diarrhoea, cholera and dysentery.

Diarrhoea is one of the three top killers of children under the age of five in Malawi, alongside malaria and respiratory infections. According to national health ministry statistics, twenty percent of children under five years old in Malawi suffer an episode of diarrhoea every two weeks.

Mchipa says CLTS was brought to the Mkanda community in 2008 by government-trained health extension workers after it was introduced to the country by a development consultant from India, Dr. Kamal Kar.

“CLTS was pioneered in Bangladesh where it is reported to have been very successful. The government of Malawi became interested and invited Dr. Kar to train extension workers. I am one of those who got trained,” he says.

Mchipha explains that communities are encouraged to use locally-available materials in constructing pit latrines to reduce costs.

“This will in the long run ensure sustainability, as the communities do not have to rely on financial assistance from government or donor agencies. They can easily build latrines with locally found materials which they do not have to spend money on.”

Defecating in the open, especially in the bush, has long been standard practice in the rural areas of Malawi. Many people see the construction of a toilet as a luxury they can do without in this poor country where up to 60 percent of the population lives below the poverty line of $1 a day.

“Even now you see that it is usual for many men around the country to go by the roadside or under a tree to urinate. Some even come out of cars just to urinate by the roadside. But for the people of Mkanda, this sort of practice is frowned upon,” says Mchipha.

A neighbourhood watch, comprising both children and adults, patrols the Mkanda area ensuring that no one defecates in the open. Natural leaders – who have shown special enthusiasm for the concept during orientation sessions run by extension workers – are charged with coordinating efforts.

“While patrolling, we are armed with catapults which we use to stone anyone found defecating in the open,” Mkanda resident Ganizo Kalaya told IPS.

Kalaya explains that children are engaged in the neighbourhood watch because they are usually honest and have no hesitation sharing information about who is still defecating in the open. He says an emergency meeting is called if the patrol discovers any faeces in the village grounds or bushes and that the entire neighbourhood is taken to task to reveal the culprit.

“It gets embarrassing for the villagers to be put through such an ordeal, as such the practice of defecating in the open is becoming a very rare occurrence,” Kalaya says.

Mkanda area has since been declared “open defecation free by the Mchinji district commission and is being used as a model for the CLTS approach in the country.

The concept, being advanced by local assemblies, has also been adopted in nine of the Malawi’s 28 districts. Plan International, WaterAid and UNICEF are providing financial support in expanding CLTS around the country. The concept is reported to be in use in more than 20 countries in Africa, Asia, the Middle East and Latin America.

The government’s 2008 Malawi Millennium Development Goals (MDGs) Report indicates that the percentage of households with improved access to sanitation in Malawi have increased from 72 percent in 1990 to 88 percent in 2006.

“This is an indication that the country is making good progress towards achieving improved access to good sanitation,” states the MDGs report.

The report also says that Malawi, compared to many other sub-Saharan countries, has a high level of access to improved sanitation facilities. The government projects that 98 percent of Malawians will have adequate sanitation by 2015, well above the MDG target of 86 percent, according to the MDGs report.

Satisfied with this performance, Finance Minister Ken Kandodo moved to reduce the 2009-2010 allocation to the ministry in charge of sanitation by 25 percent.

“The Ministry of Irrigation and Water Development is one of the (ministries) which completed implementation of its large projects,” Kandodo stated in the budget summary.

But the move may be premature as these positive figures for water and sanitation coverage have been challenged.

A study by the International Institute for Environment and Development (IIED) found only less than 10 percent of the populations of the major cities of Blantyre and Lilongwe live in homes connected to the sewage system. Residents of the informal settlements where nearly two thirds of urban Malawians live told IPS they had seen little sign of the progress claimed by government.

Kandodo did pledge money from the current budget to constructing 798 sanitation and hygiene units.

With the global recession affecting donor support and drought threatening national revenues, CLTS may become an important part of sustaining progress towards improved sanitation for poor urban and rural communities.