PORT-LOUIS , Feb 18 2010 (IPS) - Sandhya Boygah considers herself a victim of male-dominated politics. In 2007, she was asked by her party, the ruling Labour Party, to step aside and allow a man to stand for the elected post she sought. 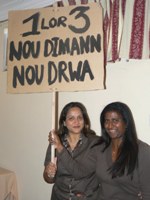 Women's rights organisations want political parties to nominate one female candidate for every three candidates in the next election. Credit: Nasseem Ackbarally/IPS

After long days of intense canvassing; of lobbying ministers and neglecting her family and children, Boygah thought she would be nominated for the post of chairperson of the Pamplemousses/Rivière du Rempart District Council, in northern Mauritius.

“Unfortunately, when the time came the party preferred a man. I was really hurt,” she recalled.

She added that she will insist her party nominate her as a candidate for the July elections. (In Mauritius a candidate must be nominated by the leader of their political party before they can stand for elected office. The alternative is to run as an independent candidate.)

It has been three years since Boygah was asked to step aside because of her gender and, while progress has been made towards achieving increased female representation in politics, it remains far too slow for some.

Rights organisations say too few women are being nominated by leaders of political parties as candidates in local, regional and national elections. Of the members of parliament (MPs), only 17 percent (12 out of the 70 members) are women, in municipalities only 11.2 percent of politicians are women. And in the district councils the number is lower, with only 5.2 percent female representation. Though this is an increase from 2005 where only 5.4 percent of MPs were women.

There have been increasing calls to improve female representation in parliament ahead of July’s national assembly elections – where members are elected to parliament by voting in multi-member constituencies.

Mauritius committed to having 30 percent female representation in parliament by 2005 when it signed the Southern African Development Community Declaration on Gender and Development in 1995. The agreement, however, is not binding.

A local non-governmental organisation, Women In Networking (WIN), is circulating a petition calling for increased female representation in parliament. They hope to obtain 50,000 signatures by the end of March when the petition will be handed over to political leaders.

“We want things to change for the upcoming election due later this year,” said Paula Atchia, a member of WIN affiliate, Women in Politics (WIP). WIP has asked all political parties to nominate at least one female candidate for every three candidates in each of the 20 constituencies of the island.

Paul Berenger, head of the opposition Mouvement Militant Mauricien, may have promised to nominate a woman as speaker of parliament if his party comes to power in the next election, but WIP is sceptical. “This is not our goal. We want one in three candidates. Let us do it now,” Atchia said.

Other rights activists have called for a compulsory quota system to be introduced. “Without a quota, we’ll not get enough women as candidates,” said Professor Ameenah Gurib-Fakim, Vice-Chancellor at the University of Mauritius.

But this may not happen for a while. While a conservative culture has been partially blamed for lack of female representation in politics, the country’s constitution is also hindering transformation.

Mauritius remains one of two countries that have not signed the binding SADC Protocol on Gender and Development – which commits countries to work towards the goal of having 50 percent women in political and decision-making positions by 2015 – because it contradicts the country’s constitution. A quota system will contradict the clause in the constitution that promotes equality, experts say.

Nita Kumaree Deerpalsing, an MP from the ruling Labour Party, explained that the concept of gender equality in the constitution means one gender cannot be privileged over another.

She said Mauritius is a sovereign country with its own laws and government had to be careful how it interprets international codes, such as the SADC protocol. She said any international agreement signed by Mauritius had to comply with the country’s laws.

“The problem is legal so it has to be dealt with legally and they have to find gaps to try and solve the issue. The process has already started but will take time to identify the gaps because the constitution is good as a whole,” Deerpalsing said.

Loga Virahsawmy, the director of Gender Links (Mauritius and Francophone Office) agreed, adding that the constitution needed to be preserved.

“We have a very good constitution and we cannot amend it because of one article, so we just have to look for ways around the problem,” Virahsawmy said.

Deerpalsing said that until this was finalised, political parties had to commit to nominating more women to run for political office.

“The main political parties have to align more women on their lists – that way the number of female MPs can increase. Women across the country have become conscious of the fact that there is low female representation and they are starting to get involved in politics,” she said.

Virahsawmy said women in Mauritius wanted to venture into politics and have shown interest through their different political parties. “They are beginning to head committees and (are) taking up more leadership roles,” Virahsawmy said.

Rishy Kumar Choony, former chairman of the Moka-Flacq District Council (East), agrees that women have an important role to play in politics.

Choony nominated two women to his 12-member council after he realised they were able to successfully tackle the social problems that affected his village.

He added that many men still believed a woman’s place was at home: “Religion and culture have not been very helpful either in taking the women out of their home.” He is presently training his 16-year-old daughter in political skills so that she can take his place one day.

Dany Marie, member of Rezistans ek Alternativ, a small political movement, said there still remained certain factors that discouraged women to become involved in politics. One of these, she said, is the fact that most women work in sectors where being active in politics is against employment regulations.

She added that women also worked in areas, like the manufacturing industry and call centres, where the hours are so long and irregular that they had little time for pursuits apart from work and their family responsibilities.

Boygah has called on Prime Minister Navin Ramgoolam, who heads the Labour Party, to offer 50 percent of the party’s election tickets to women in the next election.

“Is he ready to play such a game?” asked Boygah.