RIGHTS: New U.N. Envoy to Crack Down on Sexual Violence

UNITED NATIONS, Feb 2 2010 (IPS) - When the Security Council adopted resolution 1325 back in October 2000, it was a historic event: for the first time the U.N.’s most powerful political body dealt with a gender-related issue, explicitly linking women to peace and security. 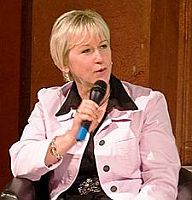 Margot Wallstrom of Sweden is the new U.N. special representative to tackle violence against women and children. Credit: public domain

Last week, that resolution completed a full political circle when Secretary-General Ban Ki-moon appointed Margot Wallstrom of Sweden as his Special Representative (SRSG) to tackle violence against women and children in the world’s battle zones.

“We are looking forward to Ms. Wallstrom getting the U.N.’s house in order, particularly in this tenth anniversary year of resolution 1325,” said Sarah Taylor, executive coordinator of the Non-Governmental Organisations’ Working Group on Women Peace and Security (NGOWG).

The appointment of Wallstrom, currently a vice president of the European Commission, comes amidst continued reports of gender violence, including rape and sexual abuse both locally and by humanitarian aid workers and U.N. peacekeepers, mostly in war zones and in post-conflict societies.

The incidents of sexual attacks, both on women and children, have come from several countries, including Cote d’Ivoire, Sudan, Democratic Republic of Congo (DRC), Haiti, Burundi, Guinea and Liberia.

“We hope the new SRSG will ensure there is no wiggle room for U.N. and government actors responsible for addressing sexual violence in conflict,” Taylor told IPS.

“Their obligations include helping empower women and bring perpetrators to justice,” she added.

Taylor also said the new SRSG will have a lot on her plate “as the magnitude of rape in war is so vast, and the need for U.N. to better coordinate its response to the problem is critical.”

She pointed out that the United Nations must get its own house in order, not just for its own credibility but also to provide true justice for women survivors.

Ambassador Anwarul Chowdhury, former U.N. Under-Secretary-General and initiator of resolution 1325 when he was president of the Security Council, told IPS that in the name of peacekeeping, the abuses which have been ignored, tolerated and left unpunished for years by the U.N. cannot be acceptable in a civilised international community.

“From time to time, some statistics are released by the department of peacekeeping operations (DPKO) as to how many such cases have been referred to governments for action. Nothing is known after that,” he said.

In 2009, some 112 complaints were made to troop-contributing countries for action concerning all forms of misconduct by peacekeepers, including sexual exploitation and abuse, according to U.N. figures.

But the world body received only 14 responses from member states about the complaints.

In 2008, the United Nations sent 192 complaints to member states and received only six responses, while 146 complaints were made in 2007, with only nine responses.

In a rare occurrence in 2003, six troops from Nepal were jailed in their home country for offences committed while serving with the U.N. peacekeeping force in DRC.

Technically, the United Nations has remained helpless because it has no authority to punish wrongdoers from member states who rule the world body.

Chowdhury said the new SRSG should be accountable to the General Assembly and the Security Council to pursue with member-states, and with SRSGs in the respective field-missions and U.N. entities concerned, to see to it that justice is done and peacekeeper perpetrators duly punished.

“The U.N. leadership hides behind the position that it is the sovereign right of member-states to try their peacekeepers,” he said.

“Well, if the U.N. through its tribunals, and through the International Criminal Court, (ICC) can put former or sitting heads of state on trial, then why not peacekeepers? What makes them so sacrosanct?” Chowdhury asked.

This is the challenge the new SRSG should take up and prove her accountability to the world as whole, particularly to women and girls, he said.

The SRSG in charge of each of the 18 peacekeeping missions should be accountable for sexual violence and abuse committed by any peacekeeper in his/her jurisdiction, he argued.

“The U.N.’s performance is dismal in this regard, to say the least,” Chowdhury said.

“It is high time that the Security Council act urgently to structure a set of mandatory and comprehensive guidelines for peacekeepers so that this smear on the U.N. is cleaned up for all time to come,” he told IPS.

Currently, there are more than 113,000 peacekeepers, including troops and civilian staff, serving in 18 peacekeeping operations on four continents.

In a statement released Monday, Margot Wallstrom said the “challenge is enormous”, and “I intend to bring all of my energy and political experience to bear on it.”

Violence against women is the most common but least punished crime in the world, she added.

“It continues in every continent, country and culture and the results are devastating on women’s lives as well as on their families and on the fabric of society as a whole,” she added.

Wallstrom said that in recent years,” it has been sickening to see sexual violence become a tool of modern warfare”.

Following the 1325 resolution, the Security Council adopted two other resolutions – 1820 and 1888 – relating to women and security.

The 1888 resolution, co-sponsored by more than 60 countries, was adopted last September at a Security Council meeting presided over by U.S. Secretary of State Hillary Clinton.

That resolution called for the immediate appointment of a SRSG with a mandate to end sexual violence against women.

“The effectiveness of the new SRSG will also depend on Wallstrom’s legitimacy with survivors of sexual violence and the people who support them; and credibility among a wide range of interlocutors, including high-level government officials and military commanders,” said Taylor of NGOWG, an international coalition that includes Amnesty International, Human Rights Watch and Femmes Africa Solidarite.

“Margot Wallstrom has a track record of commitment to the advancement of women,” she said.

But even the most committed individual, said Mollmann, “needs adequate resources to get the job done. U.N. member states should step up their support now,” she declared.