KAMPALA , Feb 4 2010 (IPS) - HIV-positive Justine Kirumira* is a mother torn between doing what is right for her daughters and her own fear of HIV/AIDS. She suspects that her eight and 12-year-old daughters may also have the virus. But she may never know the truth of their status because she refuses have them tested. 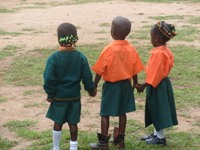 Many Ugandan parents are still too afraid to test their children for HIV. Credit: Evelyn Matsamura Kiapi/IPS

Kirumira is terrified to face the test results in case her daughters are HIV-positive. “No, I cannot test my children for HIV. How will I break the news to them?” she asks.

But Kirumira’s is not an isolated case. Many parents in Uganda are still reluctant to test their children for HIV because of the fear and stigma that surrounds HIV/AIDS. This reluctance to test for HIV is a trend that is slowing down paediatric AIDS prevention, treatment and care efforts in the East African country, according to health organisations.

“Testing is still eluding us and stigma is still very high. Also, parents do not know yet how to pass this information (that they are HIV-positive) to their children. That’s why early diagnosis is still lagging behind,” says Dr Zainab Akol, the national programme manager for government’s AIDS control programme.

In Uganda, the Ministry of Health (MOH) estimates that 1,153,000 people are living with HIV as of December 2008, including 88,919 children aged 0-14 years. Of these children, 33,152 have CD4 counts – a measure of how low their white blood cell count has fallen, indicating progress towards full-blown AIDS – that should see them put on antiretroviral treatment under previous guidelines.

Just 40 percent of these severely immune-compromised children were receiving treatment by the end of September 2008, and most of these in urban areas.

The problem in Uganda at least is not a lack of money to pay for drugs: Dr Sabrina Kitaka-Bakeera, from Makerere University Medical School says children’s guardians sometimes fail to bring them to hospitals for treatment, or health workers lack the training to prescribe and follow-up treatment with paediatric patients.

Uganda faces an uphill task responding to new guidelines from theWorld Health Organisation (WHO) that direct that every child who tests positive for HIV should receive ART regardless of CD4 count. Each year, more than 20,000 mothers in Uganda pass on HIV to their babies, according to the MOH.

Because Kirumira does not know how to deal with her daughters being HIV-positive every time they fall sick it becomes a traumatising experience for her. Kirumira becomes frantic, praying that they are not HIV-positive. On one occasion, when her daughter was ill with malaria, she locked herself in her bedroom. It was only when a relative stopped by that the relative managed to get Kirumira to take her daughter for treatment.

“Yes, there is a possibility that my daughters may also be HIV-positive. But I rather not know. It’s only when they fall sick that I really get worried (that they may be infected after all),” the widow tells IPS at her home in Zana, a suburb east of the capital Kampala.

Kirumira, who is on ART, says she cannot stand seeing her children on the life-prolonging drugs all their lives because it is very depressing. She also does not want her daughters to be discriminated against in school.

Fear and guilt are the main reasons why parents like Kirumira are reluctant to test their children for HIV, explains psychologist Dr Janet Nambi, the head of the mental health and community psychology department at Makerere University.

“Accepting it (that one’s child is HIV-positive) is a process and seeking help is also a process…No one wants to know the worst. And for children who get HIV through vertical transmission (from mother-to-child), of course there is that guilt; the guilt that ‘I am the one who has passed on this infection to my child.’ And I think many parents do not want to deal with that guilt,” Nambi tells IPS.

The challenges in paediatric treatment lie both in prevention and care, according to Akol.

“In prevention, Uganda is still producing 20,000 to 30,000 HIV-positive children every year. That alone is overwhelming. However good our system is or however hard we work, we cannot manage 20,000 to 30,000 infected children annually.

“(For instance), even when a woman knows she is HIV-positive and pregnant, she does not complete the whole cycle of (anti-retroviral) treatment,” Akol says.

She says because of the stigma surrounding HIV/AIDS, some HIV-positive women cannot even tell their partners about their status for fear of being rejected. “Women who are infected still breastfeed their children even when they know they are infected. That is a concept we are not managing. And even when a woman has an infected baby and wants her baby diagnosed, testing is a problem because we cannot provide services adequately everywhere,” Akol says.

However, the unavailability of medicines for paediatric ART was also a setback until recently when the WHO developed ART dosages specifically for children. In June 2008, the WHO also set new guidelines indicating that all children confirmed to be HIV-positive and less than one year of age be started on ART to reduce the related morbidity and mortality rates.

“We (the MOH) have introduced ‘Early Infant Diagnosis’ with the hope that we catch the infection early and treat the children and also try to follow them up,” Akol says.

Without care and treatment, over 80 percent of children living with HIV die before they reach their second birthday. The majority of known children with HIV are above five years old, a sign of delayed/late diagnosis, according to a 2008 report on HIV services for women and children complied jointly by the United Nations Children Fund (UNICEF), Joint United Nations Programme on HIV/AIDS and the WHO.

However, other known causes for paediatric HIV/AIDS include limited access to PMTCT services and lack of deliberate budget prioritisation of paediatric AIDS. High levels of fear to test and disclose HIV/AIDS status and inefficiencies in the health system are also main causes, says a 2009 factsheet by the Uganda Paediatrics Association (UPA). UPA is a not for profit organisation that promotes the dissemination of knowledge to paediatricians and child health workers to enhance the welfare of children in Uganda.

“Furthermore, there is still a lot of underlying stigma and discrimination regarding the testing of pregnant mothers, and hence (hinders) prevention of transmission to the unborn baby. These setbacks have consequently resulted in late diagnosis and treatment of the children, with many children presenting in the late stages of HIV/AIDS,” says Kitaka-Bakeera, who is also president of UPA.

While there are few paediatricians and paediatric specialist nurses and counsellors, lack of knowledge among health care providers on how to manage children and the limited capacity for health facilities to do early infant diagnosis and testing also affect progress, the UPA fact sheet says.

The Global AIDS Alliance has launched a three-year Campaign to End Pediatric HIV/AIDS in Africa (CEPA). The campaign includes: selected African advocacy organisations and networks; the Clinton Foundation HIV/AIDS Initiative; and UNICEF. It focuses on overcoming policy and implementation bottlenecks to scaling up PMTCT and paediatric diagnosis, treatment, and care programmes.

The campaign is run in six African countries: Kenya; Tanzania; Uganda; Zambia; Nigeria, and Mozambique. CEPA aims to reduce the incidence of paediatric HIV/AIDS and improve the delivery of treatment to children and mothers from the current average of 30 to 40 percent to the globally agreed‐upon target of 80 percent.

“We hope to reduce the number of children who are exposed to HIV annually to less than 2,500. And for those 150,000 children already infected, we would like to see them access care and treatment and make this treatment optimal and sustainable,” says Kitaka-Bakeera whose association is a CEPA partner.

The MOH has also started a strategy called ‘positive prevention’ which aims for increased prevention and care.

“We hope that couples will test and get to know if they have HIV. That way, we shall be able to take them through how to prevent further child birth and if they decide to do so, they do it in the context of HIV.” Akol says.

“If we can get that right, we should be able to halve the infections just through prevention. We are also hoping that couples will take their children for diagnosis early on. Treatment is now not a problem. We have a lot of donations (for paediatric ART),” Akol says.

However, Nambi says, availing treatment without the sensitisation of parents is meaningless. “I believe sensitisation is very important for parents to know that there are services available and these services are mostly free and their children have a chance to live and grow. This sensitisation may require counsellors working specifically with the parents,” she says.