WASHINGTON, Mar 6 2010 (IPS) - The vast majority of the species protected by the Convention on International Trade in Endangered Species of Wild Fauna and Flora, or CITES, live on land, but as marine species come under increasing pressure from unsustainable fishing and a range of climate change-related threats that focus is beginning to shift. 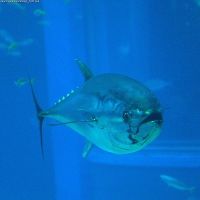 Some countries are seeking a ban on commercial trade in bluefin tuna, estimated to be a 7.2-billion-dollar-a-year industry. Credit: Public domain

Trade in some of these marine species, however, is highly lucrative, and so limiting their commercial trade has made for contentious and high-stakes international politics.

The parties of CITES meet every two and a half years to assess the treaty’s effectiveness and vote on adding or removing species from its lists – lists which dictate whether and the degree to which threatened plants and animals are protected from commercial trade.

The next meeting will begin next week in Doha, Qatar, and go from Mar. 13 through 25. On the agenda will be a record number of proposals to protect marine species.

Trade in one of those, the Atlantic bluefin tuna, is estimated to be a 7.2-billion-dollar-a-year industry.

Wednesday, the United States reiterated its support for listing the threatened tuna under Appendix I of CITES, which would ban all international commercial trade in the popular sushi and sashimi fish.

Thursday, a Japanese government official announced his country would not comply with a ban on trade in Atlantic bluefin. Four-fifths of the harvest is shipped to Japan where a single fish can be sold for as much as 100,000 dollars.

“If worse comes to worst, Japan will have no choice but to lodge its reservations,” Japanese Senior Vice Minister of Agriculture, Forestry and Fisheries Masahiko Yamada was quoted as saying Thursday.

CITES is made up of 175 member countries – including the U.S. and Japan – which have voluntarily joined the treaty and are now legally bound by its provisions.

However, parties can file a reservation within 90 days of a species’ listing which allows them to not be bound by the provisions relating to that specific species. By filing a reservation, then, Japan could keep purchasing bluefin from other countries who also refuse to comply with the ban.

Spain, Greece and Malta – which all have major tuna-fishing industries – have also opposed a ban on bluefin trade. France, another major tuna-fishing country, supports a ban but only after an 18-month delay and only for a limited period of time. Italy has expressed support for the proposed ban.

Gerry Leape, a senior officer at Pew Environment Group, says it is unlikely that one of these European tuna giants would choose to not comply with the bluefin listing in order to continue to export the fish to Japan, since they would have to follow the EU’s decision.

EU officials were meeting Friday to discuss their position and are expected to reach a decision within the next week. The European Commission and European Parliament have already come out in favor of the ban, as have Germany and the United Kingdom.

Moreover, says Leape, reservations are “serious political statements that you decided not to follow the rules.”

“Japan as a government has a history of opposing listing of marine species on CITES appendices,” says Bill Fox, vice president and managing director for fisheries at the World Wildlife Fund-U.S. He says it is “disappointing but not unexpected that they’d oppose” listing bluefin.

Fox says that historically it “has been difficult to get support for any commercially significant fish in CITES.” Over the past year, though, people in the marine community have been looking more to CITES to achieve their conservation objectives, he says.

A political fight for survival

An international ban on Atlantic bluefin trade was first proposed by Monaco last July. Like bison on the U.S. Great Plains, the Atlantic bluefin tuna were once the marquee species of Mediterranean and Atlantic waters, where they raced at speeds up to 100 kilometres along 1,000-metre-long migration routes.

But their numbers have dropped precipitously over the past several decades – and by 60 percent during just the last 10 years.

In October, scientists at the International Commission for the Conservation of Atlantic Tuna, or ICATT, found that bluefin populations had declined 72 percent in the eastern Atlantic and 82 percent in the western Atlantic over the past 40 years, during which time industrial fishing operations have significantly ramped up.

During the last decade alone the eastern population has been depleted at two to three times sustainable rates while the western population’s decrease has more or less stabilised – albeit at an extremely low level.

This is suspected to be due to enforced and sustainable quotas in the Gulf of Mexico and eastern Atlantic waters and a lack of such science-based management in the eastern ocean and Mediterranean. The CITES ban on international trade would apply to both western and eastern stocks.

The scientists recommended that ICCAT ban fishing of the species at its November meeting in Brazil, as did some country delegations, including the U.S.’s.

Activist groups were outraged and U.S. officials expressed disappointment, but it was not clear whether the U.S. would continue to pursue a complete ban on trade in the species.

Their position was made clear this week, much to the satisfaction of those who have watched bluefin stocks dwindle dangerously close to commercial extinction.

Now, there’s “a chance” the CITES listing will be approved, says WWF’s Fox, but it’s going to be a tough battle.

The international ban on Atlantic bluefin trade was first proposed by Monaco last July. In order for it to be approved, it will need two-thirds of the parties to CITES to vote in favor of it.

“We’re excited about the U.S. decision to commit to a position of leadership,” says Leape. “While it’s still a big test to get the two-thirds vote, having the U.S. on board is huge.”

Fox points out, however, that “one of the things people – and Japan – don’t really see is that CITES can’t manage these species by itself. ICATT is going to have to do its job by cutting the allowable catch.”

“It’s important to note that nations jointly manage stocks through regional fisheries management organisations – RFMOs [such as ICCAT]. Nations – members of RFMOs – are the only ones with the power to implement management and conservation of tuna stocks,” Mike Crispino, spokesman for the International Seafood Sustainability Foundation, explained in an email. “Too often, lately, one nation blocks consensus, thus blocking progress.”

Fox says there are two ways in which a CITES listing will help ICATT, which has faced criticism for allowing too generous quotas, do its job: by neutralising international pressure opposing restrictions on fishing and by providing additional enforcement mechanisms.

Amongst the over 40 proposals on the agenda, the CITES meeting will also discuss the listings of eight species of sharks and several corals.