UXBRIDGE, Canada, Mar 23 2010 (IPS) - The survival of corals, which face grave threats from ocean acidification, bottom trawling and the jewelry and decor trade, is in even greater doubt after a vote taken at a conference under way in Doha, Qatar. 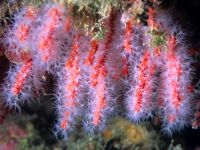 Corals, of course, are beautiful, and there is a multi-billion-dollar international business in extracting some that are 100 years old so they can be worn as a 25,000-dollar necklace or put on display in luxurious mansions.

To ensure there are corals for future generations, the United States and European Union had proposed listing the valuable, slow-growing red and pink coral species (Corallium and Paracorallium) as endangered under the Convention on International Trade in Endangered Species (CITES).

But CITES signatory countries voted Sunday at a Mar. 13-25 meeting in Doha against protecting red and pink corals by listing them as Appendix II species.

That designation would have required countries that export these corals to prove that trade in these species was not harming their continued survival. A two-thirds majority was required and only 64 countries voted in favour, while 59 voted against and 10 abstained.

The decision came just three days after a proposal to protect bluefin tuna was overwhelmingly defeated by delegates at the Doha meeting.

“Today the representatives failed to heed the science showing these populations are in steep decline. It is now up to the jewelry and design industries, and their customers, to act where governments have failed,” Teleki said in a statement

“Red and pink coral are among the world’s most valuable wildlife commodities. The CITES listing wouldn’t have banned the trade of red and pink corals, it would simply have regulated it,” he told Tierramérica from Doha.

“Right now they are being harvested in an unsustainable fashion for the jewelry trade,” he added.

Some 32,000 species, such as the green iguana (Iguana iguana), bigleaf mahogany (Swietenia macrophylla) and American black bear (Ursus americanus), are currently listed under Appendix II of the Convention, which obligates member countries to regulate and monitor any trade involving the species.

Putting a species on the CITES Appendix I list, as had been proposed for bluefin tuna, means all trade in wild-caught species on the list, such as tigers, jaguars, and African elephants, is illegal.

“For more than 20 years, countries in the Mediterranean have talked about putting management regulations into place and nothing has been done,” Teleki said.

Red and pink corals are found mainly in the Mediterranean Sea and Pacific Ocean and are among the most valuable and widely traded of all precious corals.

These corals may look like plants, but they are actually colonies of small, soft-tissue animals called polyps. These secrete calcium carbonate exoskeletons that form reefs. It is the skeleton, which remains after the polyps die, that is used for trade purposes.

Corallium and Paracorallium are long-lived, slow-growing marine animals that have been intensively extracted for centuries to meet global demand for jewellery and home décor, Teleki said.

Red corals can grow 50 centimetres in height, but today more than 90 percent of red coral colonies in fished areas in the Mediterranean are three to five cm tall, and less than half are old enough to reproduce.

Much less is known about Pacific populations, which are found primarily in the central and western North Pacific Ocean, including areas off Japan and Taiwan, and the Midway and Hawaiian Islands.

The global harvest of pink and red corals has declined 60 to 80 percent since the 1980s, and the size of harvested corals declined significantly in the same time period, according to Andy Bruckner, of the U.S. National Oceanographic and Atmospheric Administration.

The documented decline in size in Mediterranean red corals represents an 80 to 90 percent loss of reproductive capability of the species, because the larger corals have more polyps, and are therefore capable of producing more new colonies, Bruckner said in a statement.

“This demand for coral has led to an explosion in the live coral trade, with annual increases of 10 to 50 percent since 1987,” wrote Bruckner in a study published in December in the peer-reviewed, online scientific journal PLoS ONE.

He estimates this trade is worth 200 to 330 million dollars annually and growing. But there is little consideration of the impacts to coral reefs.

“We need some form of protection for these corals so that governments and the public will understand their importance,” Teleki said.

That has been an uphill struggle, says Matt Patterson, a marine ecologist with the U.S. National Park Service and coordinator for the South Florida/Caribbean Monitoring Network.

When petitioned for resources to help protect the remaining reefs, the U.S. government did nothing, Patterson told Tierramérica from his office in Miami.

“Imagine the outcry and response if 60 percent of the Statue of Liberty was destroyed,” he said.

Coral reefs support about 25 to 33 percent of the oceans’ living creatures. Some one billion people depend directly and indirectly on reefs for their livelihoods.

Not only do they provide food, they reduce the impacts of cyclones, hurricanes and storm surges.

Only a few years ago, scientists thought overfishing was the biggest threat to corals. Now they know it is climate change, which is warming oceans and making the waters more acidic.

“Corals are ecosystems that are in peril. Unless we make protection a bigger priority, they may be one of those ecosystems that blink out of existence in our lifetimes, which is truly frightening to me,” he said.