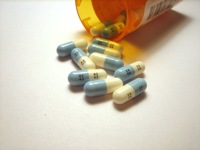 An increasing number of people who are becoming hooked on prescription drugs globally. Credit: Tom Varco/Wikicommons

“Prescriptions are great,” she said. “I recommend Codeine.” Codeine is a mild narcotic used to treat mild to moderate pain. One of the warnings on the medication is that it should not be taken with alcohol because of the risk of death. Despite this, Allen takes it when going out or hanging out with her friends.

“I usually get them from someone who gets prescribed them, otherwise one of my friend’s mother has a drawer full of rad Codeine pills.”

Allen is just one of an increasing number of people who are becoming hooked on prescription drugs. According to the International Narcotics Control Board (INCB) annual report, globally there is an increase in the abuse of prescription medication.

While no information is available for Africa, other countries show an alarming rise in the use of prescription medication. The study found that in the United States 6.2 million people were abusing prescriptions and in several European countries like France, Italy and Lithuania between 10 to 18 percent of students use sedatives or tranquilisers without a prescription.

The reason for the increase in prescription drug abuse can be attributed to the fact that these particular drugs are not themselves illegal, said Dr. David Bayever – the deputy chairperson the Central Drug Authority (CDA).

He explained that because the drugs were legal medication, when a person is caught with them they cannot be arrested. Bayever called this a “disturbing development”.

According to the INCB report, the abuse of pharmaceuticals can be partially attributed to fact that medication, which is banned in other countries, can be obtained without prescription or at unregulated markets in most countries in Africa

Paul Kruger the executive director of Narconon, an addiction treatment and rehabilitation programme in Johannesburg, says that there has been an increase of about 25 percent in the last year in the number of patients addicted to prescription medication at the clinic.

According to Kruger, the medications are obtained one of two ways: patient’s either get their prescriptions filled out by their doctor; or they get the medication from the black market. He explained the most common method of acquiring the drugs is through prescription scripts.

IPS spoke to pharmacies around Johannesburg and many said they discovered only a few cases of forged prescriptions. Eugine Jonker, an assistant pharmacist from Clicks Pharmacy in Boksburg said that while they have seen forgeries of prescriptions, particularly schedule 6 prescription medications, they had not discovered many forgeries. In the event of a suspected forgery the pharmacist has to call the doctor to confirm the prescription. The pharmacy is also required to keep a record of this in compliance with the requirements set out by the South African Pharmacy Council.

Amos Masango, chief executive officer of the South African Pharmacy Council also says that they are not aware of an increase of the misuse of pharmaceuticals. “Nothing has officially been reported to us, the council does inspections in all pharmacies to look at compliance with the standards set out by the council.”

With the FIFA 2010 World Cup being held in South Africa in less than three months, the CDA is worried that illegal drugs will flood into the country. The CDA has also discovered websites which advertise the availability of drugs in the country to foreign tourists.

Although the country has been preparing years in advance for the 2010 World Cup and there will be an increased border post policing, and airports will be more vigilant in screening people entering the country, the CDA is concerned this will not be sufficient.

“I fear whatever we do will not be enough,” said Bayever. “People will see this as a picking field and will take advantage of the event. In spite of all the measures taken one must remember that these are well-organised groups who know where the loopholes are.”

“The drug problem in South Africa is twice the world norm,” he said. “One out of every four Rands in circulation in the South African economy can be linked to the substance abuse problem.”

A CDA report presented by Bayever showed drugs can be linked to several other social problems including poverty, crime, sexual abuse and HIV/Aids.

“Unfortunately when we talk of substance abuse of any nature it knows no boundaries and happens on all levels” said Bayever.