MEXICO CITY, Mar 7 2010 (IPS) - The process of making corn tortillas – the filling, age-old traditional food throughout much of Mexico and Central America – pollutes huge volumes of water and consumes a great deal of energy. 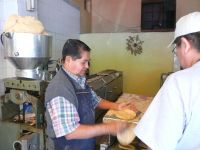 “Some years ago, a group of millers came to ask us if we had done anything in this area, and we realised that with thousands of mills in the country, the problem was big and something should be done,” Gerardo Ramírez Romero, a researcher at the biotechnology department of the Autonomous Metropolitan University of Mexico (UAM), told Tierramérica.

That is how the study, “Nixtamal Mills: Towards a Sustainable Enterprise”, began.

Corn tortillas are consumed by people of all socioeconomic levels in Mexico and, like bread, accompany nearly every meal. They are also the basis for tacos, a popular dish.

At the mill, the corn is cooked in limewater, a calcium hydroxide solution, and then ground to make the dough for tortillas. The process, nixtamalisation, was developed by indigenous cultures in the pre-Hispanic era.

To make the tortilla, about 30 grams of the dough are made into a ball, then rolled out to form a circle, approximately 14 centimetres in diameter, which is then cooked on a hot surface on both sides.

Cooking the corn in limewater produces a byproduct that is rich in starch, cellulose and calcium, a mix known as nejayote, and dumped directly down the drain, said Ramírez Romero.

Every kilogramme of corn uses two litres of water. And a small mill can pollute upwards of 1,000 litres of water each day. There are 20,000 of these mills in Mexico. In the first phase of the three-month UAM study, the experts were able to reduce water pollution by 80 percent, by removing the solids and producing more dough with them.

The next step will be to use solar energy to heat the water in which the maize is boiled, as a means of reducing consumption of natural gas, said Juan José Ambriz García, head of UAM’s department of engineering processes and hydraulics.

But the sun barely heats the water to 50 degrees Celsius, and the corn cooks at 90 degrees. The temporary solution is to pre-heat the water with solar energy and then make up the difference using gas, Ambriz told Tierramérica.

This way, the mills would be able to save 40 percent on gas.

In the future, changes in the design of the cooking process itself will make it unnecessary to reach 90 degrees, he said.

For now, solar energy is only being used to heat the mill water in the laboratory. What is needed is to develop machinery that is within the means of the tortilla producers and also allows them to save electricity – and that could take several years.

Currently, the largest cost to the mills, after the corn itself, is energy. A mid-sized mill – one that can provide dough to 10 tortilla factories – spends some 2,300 dollars a month on energy.

Ideally, this technology would be distributed through the “Mi Tortilla” programme, created by the federal government for millers to acquire new machinery, said Ambriz.

This type of mill “is a technological contribution from Mexico to the world,” he said. “The key aspect is that they were left as they were 100 years ago.”

In the past, the mills were subsidised by the government, Yolanda Hernández Franco, an anthropologist at UAM, pointed out. In the 1990s, the mills still received corn, gas, electricity and water at reduced prices.

The tortilla factories and the mills received frequent visits from inspectors in that period, but what they were doing was collecting bribes, she said.

When the subsidies for the tortilla industry ended, the inspectors and the corruption disappeared, but the millers were left “facing a globalised world,” not knowing how to operate more efficiently, said the anthropologist.

“If the pollution regulations were applied, no mill would survive,” Hernández said.

In the first phase of the study, the focus was on mills in the capital, but the next phase will encompass mills in different parts of the country.

The mills tend to be family operations, passed down from generation to generation, providing the dough to a group of tortilla factories, usually belonging to the same person. The largest mills supply more than 20 factories.

The mills themselves usually also have their own tortilla factory. People wait their turn to buy their daily tortillas for less than a dollar per kilo.

According to a survey by corn flour producer Gruma, Mexico’s 107 million people each consume 80 kilos of tortillas per year. There is no precise information on daily family consumption, but it is believed to have fallen 25 to 30 percent in recent years, due to increasing prices and families moving away from the traditional Mexican diet.

Felipe Galindo owns a mill. He began working there when he was 10 years old, sweeping the floors. Thirty-five years ago, the mill supplied 25 tortilla factories with dough, but now it’s down to three, he said.

Galindo believes the decline is the result of the perception that tortillas are fattening, even though “they have fewer calories than a slice of bread.”

According to Ambriz, “the tortilla is an excellent food,” and “along with the pre-Hispanic combination of greens or protein of some kind, including insects, it’s an excellent diet.”