GAZA CITY, Mar 2 2010 (IPS) - At 14, Nour plays the piano, and she knows the facts around her. That the average age for marriage is 18, likely to a man found by parents, her place would be within that home, and a woman has on average 6.5 children. 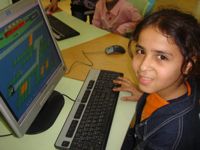 She goes to a United Nations Works and Relief Agency (UNRWA) school in Gaza City, and loves journalism, inspired by her older sister, who works at a radio station. Nour helps announce programmes on weekends, and now wants to be a journalist herself.

She wants to wait till her mid-20s to marry, and have just two children so she and her husband can afford to give them the best life possible. Her classmate Tasneem, also 14, wants to follow in the footsteps of her mother and father (both physicians) and study medicine – a common dream among the better students in Gaza. She wants to become a dentist, and spends weekends improving her English at AmidEast (America-Mideast Educational and Training Services).

Nour has been playing the piano for two years, and Tasneem loves acting, singing and poetry. She dreams of cutting a songs album. But she knows, too, that these are likely just dreams. Nour and Tasneem know they may have to give up their artistic activities once they have finished school.

“I will have to give up those hobbies once I get older,” says Tasneem. “It will be time to get serious about helping my family earn a living, and then later to take care of my own family.”

Assala, 14, is determined to stay with art. She lives in a relatively poor section of Gaza City and also attends an UNRWA school, from 12 to 4 p.m. The school buildings – many of which were decimated by the Israeli invasion last year – are overcrowded (the average class size is 45), and students often attend classes in shifts of half days only.

Assala has perhaps inherited her dreams. She has four brothers and a sister; her mother and father were just 14 and 18 when they married. Assala knows her mother wished she had attended university (in fact, her mother still hopes to enroll, to study religion) and that has become her dream as well.

“I am trying to do the best I can in school now so that I can study art in university,” Assala says. She hopes to continue her studies in Jordan, where her uncle’s family lives.

And now dreams are beginning to overtake reality, a little. The 2008 census data indicates that just 16 percent of Gazan women participate in the labour force. Many young girls in Gaza will continue the tradition of marrying young and spending most of their days confined to home with the other women in an extended family. But that is changing. In 2008, the percentage of women who were economically active grew 10 percent. The dreams of these girls are in line with that trend.

Girls speak mostly of marrying their interests with commitment to family. Some talk of escaping someplace else permanently – like nine-year-old Nadia who wants to live in Turkey because of a movie she saw, and 14-year- old Bayan who wants to move to the U.S. and become a famous singer like Michael Jackson.

But most are like Rana, 12. A student at the American International School, now housed in a cramped, rented 300-square-foot facility after its expansive campus funded by the United States was bombed during the Israeli incursion last year, she dreams of visiting Jordan and Egypt – maybe even climbing the Eiffel Tower in Paris. But Rana is firm that she wants to remain with her family in Gaza after a degree in engineering.

“This is my home, and I never want to leave forever,” she says simply.

Nour, Tasneem, Rana and Assala are like girls around the happier parts of the world in so many ways. They love to chat with friends online, play dodgeball and read adventure novels. Shopping is difficult in Gaza; there are no malls and there is little money. But they have all one dream that sets them apart: “peace and freedom”, for their country, and their families. In Gaza little girls have a way of sounding old and wise.