RIGHTS-CHINA: For Dissident’s Wife, A Time of Waiting

BEIJING, Mar 4 2010 (IPS) - Long before Liu Xiaobo, China’s most prominent political dissident and co- author of the Charter 08 call for political reform, was sentenced to 11 years in prison for “incitement to subvert state power,” his wife, Liu Xia, had accepted his fate. 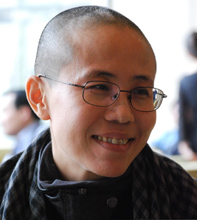 “I’ve been prepared for a long time,” says the soft-spoken 49-year-old poet. “I always knew it would happen.”

Late one evening in December 2008, hours before the call for political freedom was published online with 300 signatories – soon to be joined by thousands of others – police detained Liu Xiaobo at the couple’s home. A year later, the writer, who is now 54, was given one of the harshest sentences for a political dissident in recent memory. Last month his appeal was rejected, sparking an international outcry.

“I felt that he was going to be taken away again when he started working” on Charter 08, Liu Xia says between puffs of an Esse Light cigarette during an interview with IPS in a hotel cafe near the couple’s west Beijing apartment. Although she has never shared her husband’s interest in politics, she did not try to talk him out of it. “A person has only one chance at life. They need to do what they want to do.”

Separation from her partner is something Liu Xia has grown accustomed to over the years. They met in 1982 while both were already married and became close friends through their mutual love of poetry. They became a couple in the 1990s and were married in 1996, while he was still serving a sentence at a re-education through labour camp. After the union, she was allowed to visit him in prison.

That wasn’t Liu Xiaobo’s first period in prison. In 1989, while a visiting scholar at Columbia University in New York, he flew back to Beijing to attend the pro-democracy protests at Tiananmen Square. He later served two years for his role there.

After Tiananmen, Liu Xiaobo devoted himself to politics. He lost his job and was forbidden to publish in China, but did not want to move abroad.

“He thinks there are already enough (activists) living abroad,” Liu Xia says. “He wanted to stay here. If you want to be a true citizen, you have to pay for it. You have to give up a lot. He also feels that because he was a survivor of Tiananmen Square, he needs to speak for those who didn’t.”

Today, married life for Liu Xia consists of monthly visits with her husband, where they sit face-to-face at a long table with guards stationed at either end holding video cameras. “We talk about our families and he asks me if any friends have invited me for dinner recently and asks about my wine club,” she says.

Liu Xia sends her husband books – including all the works of Kafka – but he has received just 10 of the hundred she’s sent. He is allowed to wash daily, his cell is new and clean and he is treated well by guards.

Liu Xiaobo has written that his love for his wife sustains him in prison. In a statement during sentencing, he wrote: “Your love is sunlight that transcends prison walls and bars, stroking every inch of my skin, warming my every cell, letting me maintain my inner calm, magnanimous and bright, so that every minute in prison is full of meaning.”

It is the little things that Liu Xia misses most about her husband.

“I miss him cleaning the floor for me,” she says with a laugh. “He used to sit at the computer all day and clean the floor at night for exercise. In the morning he’d asked if I noticed that he’d cleaned the floor.”

What does he miss most about living at home?

“Meat,” his wife says. “I used to cook for him every day. He loves meat a lot – I cook all kinds of meat for him. In prison there’s not much meat.”

Liu Xia retains a remarkably positive demeanour despite her situation. She spends her days writing poetry, painting, reading and taking photographs. Her husband’s imprisonment has forced the natural introvert to engage more with the world around her. Recently, she has taken up Twitter and often shares interesting links and thoughts with her followers.

She lives under constant police supervision and no one has been allowed to visit her home since last June. Two guards monitor the lobby of her apartment, and a car trails her whenever she leaves home.

She says the international interest in her husband’s case has been surprising. The United States, European Union and United Nations have all called for his release, and Vaclav Havel, former president of the Czech Republic (1993-2003) and an author of Charter 77, which inspired Charter 08, has called for Liu Xiaobo’s nomination for the Nobel Peace Prize.

“It’s a good thing. It means the government can know that people care about this situation,” she says. “By sacrificing 11 years of his life, we hope to inspire others to speak out about what they believe in.”