BLANTYRE, Mar 22 2010 (IPS) - Two men who married each other in a traditional engagement ceremony will have to undergo trial and face years of imprisonment if found guilty of having a homosexual relationship. 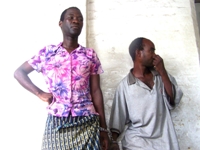 The state, through police prosecutors, brought the two men to court soon after their Boxing Day engagement and asked the magistrate to determine that they are criminals for indulging in a homosexual relationship. A magistrate’s court in Malawi’s main commercial centre, Blantyre, on Mar. 22 ruled against two men, Tiwonge Chimbalanga and Steven Monjeza.

Blantyre chief resident magistrate, Nyakwawa Usiwa Usiwa, declared that Chimbalanga and Monjeza have a case to answer to. The couple is facing official charges of “gross indecency” and “buggery” for “having carnal knowledge against the order of nature”, offences under Malawi’s colonial-era penal code.

“In the balance of probability the state has established a prima-facie case against the two as charged,” Usiwa Usiwa told the couple. The state has already administered several medical tests on the couple to establish that they were having sexual intercourse as well as a mental examination to test if each is mentally stable.

The couple will undergo a full trial and the onus now lies on the two men to prove their innocence.

Chimbalanga and Monjeza did not seem to be moved by the magistrate’s decision. They were not allowed to comment on the ruling. The lawyer representing the couple, Osward Ntuwakale, asked the court to give him two weeks for him to prepare for their defence. “I will call upon defence witnesses,” he said.

Chimbalanga and Monjeza have been arrested based on Sections 153 and 156 of the Penal Code which criminalise homosexuality and recommend that anyone convicted under these sections may be jailed for a minimum of five years and maximum of 14 years and hard labour.

Monjeza and Chimbalanga, who are being held at Chichiri Prison, one of Malawi’s maximum security jails, have been refused bail on two different occasions by the same magistrates’ court. They are taunted and jeered by crowds of people every time they make a court appearance. The situation was not different on the day of the ruling.

The case has attracted a lot of interest both locally and internationally. The court was jam-packed during the ruling, with on-lookers, rights groups and diplomats from the British High Commission. The diplomats did not comment.

“The court ruling today is a very sad development. The full trial will only perpetuate misery for the couple as they will continue to be kept in prison and continue to face the wrath of homophobic people,” said Gift Trapense, director of human rights organisation the Centre for the Development of People.

“It is very unfair to continue holding the couple in jail just because they are expressing their love for each other. The conditions in Malawi’s prisons are very bad; there is overcrowding in the cells and inmates go hungry most times. It is sad that they should continue suffering just for choosing their own way of life,” Trapense told IPS.

The magistrate has since set trial for Apr. 3.

“It is vital that as many people as possible join us in writing to the Malawi authorities calling on them to release the two men and for them to investigate their treatment in custody,” she said.

Support for the gay couple has been mounting. On Mar. 16, Malawi’s main donors, including the UK government, Germany, African Development Bank (AfDB), Norway, the European Union and the World Bank, who operate under the Common Approach to Budget Support (CABS), warned Malawi against the prosecution of homosexuals. CABS provides up to 80 percent of Malawi’s development budget of 438 million dollars.

“When we talk about human rights, we do not only talk about the majority but also minority groups like the on-going issue of homosexuals which needs to be looked into thoroughly,” Frank Kufwakwandi, head of AfDB in Malawi and also chairman of CABS said in astatement .

Kufwakwandi urged Malawi to respect human rights issues. “Respect for human rights is one of the fundamental principles of Malawi’s budget support cooperation from the CABS group,” he stated. The donor group also warned that that the country risks international isolation if it continues prosecuting homosexuals.

But the Malawi Council of Churches (MCC), a grouping of up to 22 protestant churches, has since urged government not to give in to donor pressure to accept gay rights in exchange for aid.

In a statement released on Mar. 19, the MCC called on the international community to “respect Malawi’s cultural and religious values and refrain from using aid as a means of forcing the country to legalise sinful acts like homosexuality in the name of human rights.”

The MCC also asked government to maintain the laws that criminalise homosexual acts and practices.