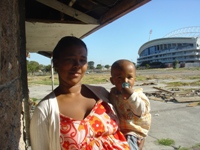 Charlene Paul and her baby stand in front of her house, next to Athlone Training Stadium, which is to be demolished. Credit: Ann Hellman/IPS

The women were notified by the municipality that their homes will be bulldozed to make way for an extended parking lot for Cape Town’s Athlone Training Stadium, while others were asked to vacate their flats for renovations. But residents fear their flats, situated in a prime location for the Soccer World Cup in June, will be rented out to soccer fans.

“There is a project of reducing carbon emissions. FIFA has called for people to be involved. Women should seize that opportunity. The country will be spending a lot on infrastructure. Women must also look at how to use those possibilities to increase their economic opportunities,” suggested Dlamini-Zuma.

The country’s deputy minister of economic development, Gwendoline Mahlangu-Nkabinde, was even more upbeat. She promised to send ten corporations working in the field of renewable energy and development finance institutions to women to help them to find jobs.

“Those of you who are into renewable energy, those who want skills and want to get started in renewable energy, come and see me,” she said. International football association FIFA has indeed set up several ‘legacy projects’ across the country that are supposed to generate economic benefits for South Africans.

But these projects are a smokescreen to hide the suffering of poor communities displaced by the World Cup, claim four women from Kewtown, who feel abandoned in poor living conditions, while government funds get spent on making the soccer world cup a “world class event”.

Pamela Beukes, Rachel August, Charlene Paul and Mariam Michaels have lived in the run-down community of Kewtown, which was formerly classified by the country’s apartheid government as a “Coloured” area, for their whole lives.

Paul is set to find out on Mar. 12 from Cape Town’s Wynberg Magistrates Court if she and her three children will continue to have a roof over their heads. They received notice that their home, situated next to Cape Town’s Athlone Training Stadium, will be bulldozed to make way for an extended stadium parking lot.

“I don’t see the benefit of the World Cup [for us], because we are losing this property,” Paul told IPS.

Paul shares a row of five, one-roomed ‘houses’ with 18 other adults and children. Most of them were born and bred in Kewtown. Because they were never allocated council housing and had nowhere else to go, they occupied the structures illegally many years ago, after seeing them standing empty for years.

“We don’t see the need for this structure to be bulldozed when there is a housing shortage,” said Paul.

On the other side of the training stadium, Mariam Michaels also says she fears the World Cup will force her into homelessness. After city officials asked her to vacate her council flat for renovations two weeks ago, she has been living with her two daughters and four grandchildren in a converted shipping container.

The Cape Town city council has embarked on major upgrades of council flats near the stadium for the first time in 30 years, painting their derelict exteriors and fixing broken plumbing and roofs.

“They said they would give our place a makeover. It’s for the World Cup. I have lived here 27 years and my windows have been broken for the past five, but the city never showed any interest in fixing them before,” Michaels told IPS.

“The council officials promised us the renovations would only take six weeks and then we would be moved back. But I don’t know yet if that will happen,” she added.

There are fears among community members that they will not be able to return to the council flats and instead be abandoned by the city. They are also concerned about their safety. Rachel August, one of Michael’s neighbours, told IPS about people running through the shipping container area at night, throwing stones on the metal roofs.

“The council told us it was not true that we were being moved to make way for the World Cup, but we have no guarantee. All we can do is wait and see. If they leave me here, I will cause chaos. That flat has been mine for 35 years, and I want to go back” said August angrily.

“What made us suspicious was that people could have remained in their flats while these renovations were done, but the city insisted they move out,” Beukes explained. “Because people are sitting in shipping containers and in not their homes, right now we can’t say that we have had any benefit from the World Cup.”

The Kewtown community will live in anxiety until the renovations, which the city council said will take six weeks, will be finalised at the end of March. If they are not moved back into their flats by then, they say they will hold a protest march to demand their rights.