JOHANNESBURG, Mar 29 2010 (IPS) - Sixteen-year-old Neo Malema and his brothers and sister live with his grandmother in the impoverished Alexandra Township in Johannesburg. Despite his poor background, Malema dreams of one day playing football for the country’s national squad, Bafana Bafana. 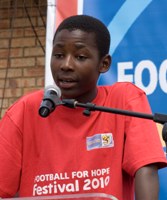 Neo Malema has a passion for soccer and helping other disadvantaged youths. He hopes to one day manage an organisation like Football for Hope. Credit: Zukiswa Zimela/IPS

Football for Hope, an NGO that aims to take children from disadvantaged communities around the world and develop them into future leaders for their communities, has given him the chance to realise his dreams.

“Football for Hope has changed my life, I used to be so naughty, I would wander around playing football in the streets. One day a coach found me and put me in his team, I have been playing for four years. Now I know that if you work hard you can achieve your dreams,” Malema said.

Malema and eight other young football players are part of Team Alexandra, which will represent South Africa at the FIFA Football for Hope festival in Alexandra in July 2010.

The Football for Hope initiative was established in 2007 by FIFA and Streetfootballworld to use football as a tool for enhancing global peace and social development. The movement relies on the universal appeal of football to achieve its mission, and so far 1.5 million youngsters have benefited from the programme.

Speaking at the official opening launch of the event in Alexandra on Mar. 25, managing director of Streetfootballworld Jurgun Griesbeck said that the aim of the event was to encourage young people to take responsibility for their own lives.

“The participants were chosen to show the world that they are young leaders so that when they are talking about themselves and where they are going, you yourself become inspired,” he said.

Thirty-two teams from disadvantaged communities from all over the world will participate in the exciting event taking place from Jul. 4 to 10. The delegates come from over 40 countries and some teams comprise of players from more than one country.

The tournament will have mixed teams of girls and boys from countries such as Kenya, Cambodia, Israel and Palestine.

But each of the 12-minute games will be played without official referees.

So all disagreements will be resolved through dialogue, a method which organisers hope will enhance mutual understanding and personal development in the young players.

The players will also participate in activities which promote the exchange of ideas and life experiences, including talks on issues like HIV/AIDS and football coaching workshops.

Also speaking at the launch, the chief executive of the local organising committee for the FIFA 2010 World Cup, Danny Jordaan said that the upcoming world cup was not only about the famous football stars that are coming to South Africa for the event but also about the youngsters participating in the Football for Hope Festival.

Sibongile Mazibuko, the executive director of the 2010 World Cup for the City of Johannesburg, said it was important to use football as a tool for social development and change.

Malema has a passion for soccer and helping other disadvantaged youths, he hopes to one day manage an organisation like Football for Hope.

“Football has brought me back to the right path, it taught me that when you work hard you will definitely achieve your dreams,” said Malema.