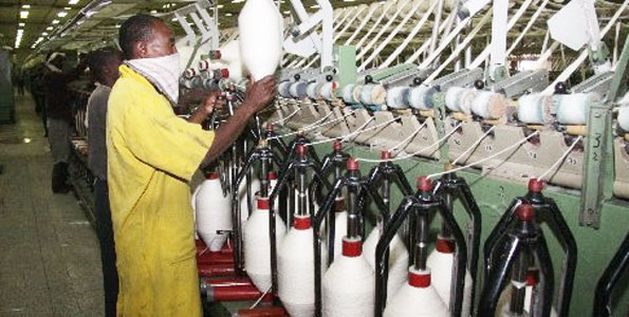 Workers at Rupa Cotton millers in Athi River export processing zones spin cotton balls into lint, most of which is shipped to the US market. Photo/ANTHONY KAMAU

GENEVA, Mar 23 2010 (IPS) - African cotton-producing countries hope that Brazil’s intended retaliation after its success at the World Trade Organisation’s (WTO) dispute settlement body will have a positive spin-off for them but seem reticent about pursuing a similar course of action against the U.S. for its continued use of subsidies in cotton production.

“True, we don’t benefit directly from the WTO ruling,” Prosper Vokouma, representative of Burkina Faso to the United Nations in Geneva and coordinator of the C4, told IPS. The C4 is the grouping of four cotton-exporting African countries of which Benin, Burkina Faso, Mali and Chad are the members. It has helped put the issue of the “white gold” on the WTO agenda.

“But the WTO ruling gives legitimacy to the C4’s demands,” Vokouma says. “It is a strong criticism of massive and distorting subsidies. The WTO dispute settlement body has confirmed that U.S. subsidies damage other countries’ producers because of their impact on world market prices,” declares Vokouma.

"The WTO dispute settlement body has confirmed that U.S. subsidies damage other countries’ producers because of their impact on world market prices"

“We know that the U.S. has a bad conscience regarding this issue. Some 2,500 large farmers share more than three billion dollars between them every year, whereas 20 to 30 million African cotton producers live in misery because the product of their hard work is not even enough to feed them,” explains Vokouma.

Studies by international organisations show that the total abolition of U.S. subsidies would increase the world cotton price by 14 percent. According to the charity Oxfam, this would translate into additional revenue that could feed one million more children per year, or pay the school fees of two million children in West Africa.

“If Brazil can push the U.S. to eliminate its distorting subsidies, it will also indirectly be a victory for the C4 and the other 32 African cotton producing countries, as well as for the WTO and its credibility,” Vokouma points out.

If this happens, what is the next step for the C4? “We hope that we can find a solution within the framework of multilateral negotiations but without resorting to the dispute settlement mechanism,” admits Vokouma.

“This option would be the last that the C4 would use to show to the world that we don’t give up on a grave non-compliance with the rules of international trade. For the time being, we alternate between multilateral negotiations and bilateral contacts with the main stakeholders,” he adds.

The C4’s response comes after Brazil on Mar 8 published a list of 100 U.S. goods on which it will increase custom duties to a value of 591 million dollars. These goods include tyres, cars, cosmetics, food items, pharmaceuticals and, of course, cotton, on which the increase in duty is almost 100 percent. The increase is due to enter into force within 30 days.

One week later, earlier than originally announced, Brasilia went a step further: it published a list of 21 retaliation measures concerning intellectual property, up to a total value of 238 million dollars. It concerns the suspension – without compensation and for a limited period of time – of the payment of patents on medicines, chemicals and biotechnological products for agriculture.

Payments are also suspended for copyright on music, books and U.S. movies. The Brazilian government set a deadline of 20 days for consultations on these new sanctions.

These steps happened after the WTO’s historical decision in the Brazil-U.S. commercial war that has lasted for more than eight years. On Aug 31, 2009, a WTO arbitration panel authorised Brazil to retaliate against the U.S. for an amount lower than what Brasilia had asked for but which is the second highest ever granted.

In return, the panel authorised the adoption of counter-measures in sectors other than goods, namely intellectual property and services.

The WTO allows this kind of “cross-retaliation” only when measures in the same field would do more harm than good to the country concerned – for example, the application of a 100 percent custom duty on products that it badly needs, explains Nicolas Imboden, director of the Ideas Centre in Geneva.

It is the second time that the WTO has allowed this and, if Brazil puts its threats into action, it would set a precedent in the history of the organisation.

If Brazil does take retaliating steps against intellectual property, this could put pressure on the U.S. government because lobbyists other than cotton producers could try to influence the administration and U.S. congress, according to Imboden whose centre advises the C4 and is an independent organisation assisting low-income countries with integration into the world trading system.

“Taken on its own, the WTO ruling will not change U.S. policy, even though suspending the payment of the patents on medicines could hurt the Americans a lot,” says Imboden.

“However, considering the other trade pressures facing the U.S. administration – negotiation of the Doha Round, the threat of new dispute settlements, the budgetary deficit – these sanctions could be the straw that breaks the camel’s back.

“The importance of these sanctions is underlined by the fact that the Americans have immediately reacted to the publication of the lists by announcing their intention to travel to Brazil and find a friendly solution. But one has to hope that the Brazilians will stick to their positions,” Imboden emphasises.

The Brazilian private sector, which fears a decrease in U.S. investment, is strictly against the sanctions.

The Brazilians and the Americans have announced their intention to negotiate. Imboden doubts that Brazil will attack intellectual property: “Rather, the U.S. will probably pay compensation to Brazil without changing its cotton policy.”

It will be a moral victory that puts pressure on the U.S. in the Doha Round talks but the effects could be limited as those negotiations “are not going anywhere”, states Imboden. In such a case, the Africans would be the big losers.