BOGOTÁ, Apr 14 2010 (IPS) - Feliciano Valencia, who holds the rank of minister for the Nasa indigenous people in the southwestern Colombian province of Cauca, was arrested Saturday but released on bail. 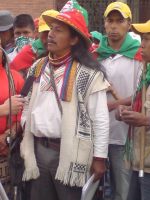 Valencia was getting ready to fly to Buenos Aires, Argentina and from there to Cochabamba, Bolivia to attend the Apr. 19-22 World People’s Conference on Climate Change and the Rights of Mother Earth.

He is an adviser (or minister) for peace for the Association of Indigenous Councils of Northern Cauca (ACIN) – “Cxab Wala Kiwe” (Territory of the Great People) in the Nasa tongue.

He also receives special protection under precautionary measures ordered by the Inter-American Commission on Human Rights (IACHR), like other indigenous leaders in Cauca such as Aída Quilcué and Daniel Piñacué.

The three are spokespersons for the Social and Community Minga (which means a traditional indigenous meeting or activity for the collective good), a two-year-old indigenous movement that holds protests, marches and events to express demands to the government.

But the native leaders have been accused of “kidnapping” and “personal injuries,” along with two members of the Indigenous Guard, a Nasa community force armed only with decorated staffs representing their authority.

The accusations refer to the Indigenous Guard’s seizure of army corporal Jairo Danilo Chaparral on Oct. 16, 2008.

In a protest launched on Oct. 12 that year, the Minga had blocked the Pan-American highway in the north of Cauca province. The government sent in forces to clear the roadblock, and the anti-riot police opened fire on the demonstrators.

Right-wing President Álvaro Uribe accused the Minga of infiltration by the left-wing guerrillas that have been active in Colombia since 1964, and police chief Óscar Naranjo claimed that in the clashes between the police and the protesters, the native demonstrators were using “non-conventional weapons”.

But young Nasa Indians videotaped the attack by the anti-riot police, and the recordings, which were broadcast on TV nationwide, clearly showed a uniformed police officer shooting into the crowd of protesters.

In the clash between police and demonstrators, three indigenous people were killed and 35 wounded.

As a result, Uribe acknowledged that the police fired on the protesters, and finally yielded to pressure and travelled to the La María Indian reservation to meet with the Minga leaders.

Corporal Chaparral, who is himself of indigenous descent and whose mother lives in that area, had infiltrated the Minga protest dressed in civilian clothes. In his backpack were found camouflage fatigues, several cell-phones and manuals on handling weapons and making explosives.

The soldier’s mother said he had told her that these elements were supposed to be “found” by the police, in order to implicate the Minga in terrorist practices and point to ties with the guerrillas.

The plan was apparently concocted by the intelligence leadership in the counterinsurgency battalion 15, to which Chaparral belonged, according to a communiqué received by IPS from more than a dozen civil society organisations, including ACIN and the Minga.

Under the Colombian constitution, the authorities in indigenous communities have jurisdiction within their territories, in accordance with their “uses and customs.”

After he was captured by the Indigenous Guard, Chaparral was tried in an indigenous court, with the participation of shamans or local religious leaders, according to tradition.

As a penalty, he was given nine lashes with a whip. His head and shoulders were also bathed in holy water, in a traditional ceremony.

The local community was satisfied that justice had been done. But Chaparral filed legal action, encouraged by his superiors.

“What’s behind this? Without a doubt, it’s an attack on Special Indigenous Jurisdiction,” said ACIN legal adviser Triviño.

The problem, he added, is that no specific law “on coordinating the two jurisdictions” – the ordinary and indigenous jurisdictions – has been passed.

Although Constitutional Court rulings “have provided orientation, have given us some breathing room and have favoured us, judges interpret them in their own way,” and “do not usually have training in legal anthropology.”

Legal bodies below the level of the Constitutional Court have ruled that indigenous justice is applicable depending on the crime involved, and only if suspects of an offence committed in indigenous territory identify themselves as Indians.

The conflict involves “a failure to respect the different jurisdictions, which have already been clearly delimited by the Constitutional Court,” Freddy Páez, with the Colectivo Fuerza Común (Common Collective Force) – a group of professionals, students and college graduates taking part in the Minga – told IPS.

Valencia’s arrest is “a political problem,” according to Páez, whose Colectivo also forms part of the non-governmental Alianza Ciudadana por la Democracia (Citizen Alliance for Democracy), which defends the 1991 constitution that recognised the existence of indigenous criminal justice systems for the first time.

“Indigenous peoples have been fighting for a long time for their rights, and for their land in particular, of which they are being stripped,” he said.

In the confrontations with the executive branch, “it was the Uribe administration that came out on the losing side, after it publicly accused the Minga of close ties with what it calls ‘the terrorist guerrillas’,” he said.

“What they were attempting to do by infiltrating this indigenous soldier in the protest was trying to leave evidence to directly link the protest movement with the guerrillas,” said Páez. “The Minga believes it is retaliation by the powers-that-be that are behind the institutions, because of the movement’s strong defence of indigenous territory.”

The five main demands of the Minga, which emerged in 2008, are: no to laws designed to evict native peoples from their lands; no more war; no to free trade agreements; yes to the Colombian state honouring its previous agreements and obligations to all Colombians, including native peoples; and yes to the creation of mechanisms of coexistence and a common agenda for all Colombians.