MBABANE, Apr 9 2010 (IPS) - Business in Swaziland is perceived as a man’s playground, and Swazi women have long found themselves on the periphery. Not only are big industries dominated by men, they are also the ones who award tenders in government and other institutions. 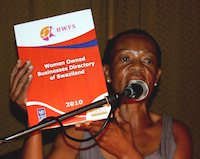 Women control about 70 percent of the Kingdom’s small and medium enterprises sector, but in the absence of any affirmative action policies on business, many of these entrepreneurs have been left out in the cold.

“We need to have engendered procurement policies in all institutions so as to level the playground,” said CEO at the Federation of Swaziland Employers and Chamber of Commerce Zodwa Mabuza.

A place in the sun

Businesswomen have devised a tool to claim their place under the sun.

The launch of the first ever Women-Owned Businesses Directory of Swaziland at the end of March has opened a new chapter for women in business. The 72-page directory will enable women-owned businesses to access some of the procurement opportunities available from the corporate sector, NGOs and government.

“For the longest time, even the procuring officers within government and other big institutions were not doing much business with women,” said Lungile Mzizi, the Project manager at the Business Women’s Forum of Swaziland (BWFS).

Mzizi attributed this situation partly to the fact that a lot of women-run businesses never get noticed because they are operating from home and in rural areas.

Two thirds of the country’s population live in rural areas, a majority of whom are women.

“Some people within government and other sectors were saying they are failing to identify businesses run by women,” said Mzizi. “At least now this directory lists the businesses and where they are operating from.”

With the directory in place, Mzizi says it would be easy for BWFS to lobby government and other institutions to discriminate positively towards women so they reach the same level with their male counterparts.

She said BWFS would also use the directory to get businesswomen to support one another by procuring and partnering among themselves.

According to Dumsile Nkambule, one of the researchers for the directory, although a lot has been done to support women entrepreneurship at start-up level, studies done around the world estimate that less than five percent of corporate spending goes to women-owned businesses.

“Working with women business owners to increase their capacity to network and scale up their operations is the critical missing link for real job creation,” said Nkambule, who is also a lecturer at the University of Swaziland.

Although United Nations Agencies operating in Swaziland have pledged to source 50 percent of their goods and services from women in the country, they have not made a serious undertaking to support women yet. United Nations Development Programme assistant resident representative Neil Boyer said UN agencies are not sure of how much business they do with women.

Boyer wondered why services such as neighbourhood care points and soup kitchens, where women play a leading role, are not supplied by companies owned by women.

“This is not charity but it makes good business sense,” said Boyer. “You can’t address HIV/AIDS and poverty without tackling gender inequality.”

With an estimated adult prevalence of 25.9 percent, based on data from the 2006–2007 Demographic and Health Survey, Swaziland has the world’s most severe HIV/AIDS epidemic.

Mabuza agreed with Boyer, adding that women invest 90 percent of their money back into their families and communities unlike their male counterparts who give back only 40 percent.

Government is slowly seeing the light on why women should also be given a chance in business.   “All along we’ve been promoting the other gender [men] in business,” said SME director Michael Zwane. “We’ve since realised that things have to change.”

But Zwane fears efforts to support women in business could be subverted, as has been observed with Swazis who register businesses that they then sell to foreigners when government is trying to promote domestic entrepreneurs.

“I’m worried that women might end up being used as fronts by men to get unfair advantage over their competitors,” said Zwane.

He said government would ensure that certain tenders go to women-owned companies. But in the absence of an affirmative action clause in the proposed Procurement Bill, this could prove to be little more than lip service.

According to Chamber of Commerce’s Mabuza, government has continued to ignore a plea to have a clause that will safeguard the interests of women as a marginalised group in the Bill.

“The legislation is not yet finalised and we remain optimistic that the Ministry of Finance will finally consider our plea,” said Mabuza.

Barbara Mabuza, the director of Cilo Consulting and a member of BWFS, said as a signatory of the SADC Gender and Development Protocol the Swazi government should come up with a procurement policy that is aligned with the regional instrument.

The Protocol calls on States Parties to put in place affirmative action measures to eliminate barriers that prevent women from participating meaningfully in all spheres of life and to create a conducive environment for such participation.

Mabuza said the proposed legislation should bind government to give a certain percentage of its business to women-owned companies.

“We’re not saying government should ignore all the principles of doing business when dealing with women,” said Mabuza. “All we’re asking for is that, after meeting all the requirements, being a woman should be an added advantage.”

But do women have the capacity to absorb the demand should government give them a chance?

“Even men have learnt through trial and error,” said Mabuza. “You never know unless you try.”