GAZA, Apr 13 2010 (IPS) - It was bad enough that Ahmad Asfour was severely maimed by an Israeli drone strike outside his house on Jan. 9, 2009. But, his search for advanced treatment landed the journalism student, now 19, in Israeli prison where he remains. 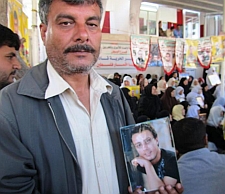 Samir Asfour with a picture of his son, Ahmed, at a weekly protest in Gaza by families of Israeli prisoners. Credit: Pam Bailey/IPS

According to Mahmud Abo Rahma of the Al Mezan Centre for Human Rights, not many Palestinians are arrested as Ahmed was, but it is increasingly common for patients entering Israel to be denied treatment unless the patient or family agrees to collaborate.

Al Mezan has joined the Physicians for Human Rights and the ADALA Centre (which defends the rights of Palestinian Arabs in Israel) to charge Israel with blackmailing Palestinian patients in Gaza, exploiting their need for medical treatment to pressure them into collaborating with its intelligence agencies.

Ahmad and four teenaged cousins were hit by fragments from a missile fired by an Israeli drone, east of Khan Younis, in the southern region of the Gaza Strip, just 14 days after Israel launched its massive, 22-day assault on the densely populated strip of land wedged between Israel and Egypt. The fragments lodged in his left eye, broke his jaw, shattered his teeth, severely lacerated both hands and right thigh, destroyed his genitals, and damaged his pancreas and intestines.

His father, Samir, was in Egypt at the time with one of Ahmad’s brothers, who had been injured just eight days before. Due to the siege imposed by Israel since Hamas took control in 2007, medical care in Gaza is often inadequate. Gazans have been unable to repair the 15 (out of 27) hospitals and 43 (of 110) primary healthcare facilities damaged in last year’s Israeli invasion, because of the ban on importation of construction materials.

Treatment in Egypt is not advanced and, according to Abo Rahma, the risk of contracting Hepatitis C is significant. Getting permission to enter Israel is difficult for Palestinians during normal times, and it was impossible during and immediately after the invasion. Even a year later, the UN reports that almost a quarter of the 1,103 patients who had sought permits for treatment in Israel in December 2009 were denied or delayed. As a result, 27 patients died while awaiting referral last year.

Ahmad and his cousins were rushed to the local hospital by his oldest brother, and the medical director sent them immediately to Egypt. Ahmad spent the next eight months there, but little could be done. In fact, because of the damage to his pancreas and the lack of appropriate treatment, he soon developed diabetes.

Doctors caring for Ahmad recommended he travel to Germany. But there was a catch: Ahmad needed a visa, and for that he was required to go to Tel Aviv – an impossibility for Gazans.

Finally, one physician suggested a hospital in Jerusalem, St. Joseph’s. As part of the approval process, Samir took his wheelchair-bound son to the Erez Crossing into Israel on Nov. 23. After waiting four hours, they were turned away, and told to return two days later. When they arrived, they were subjected to a harrowing ordeal.

“Here I am with my injured son, terrified about his health, and we were forced to remove all of our clothes so we could be strip searched. Then they took my son away from me,” recounted Samir through an interpreter. “Ahmad needed insulin every two hours, but I couldn’t give it to him…The next thing I know he is in shackles! They took the medication I had brought for Ahmed and all the money I had collected from charities (about US$2,500) and he was gone.”

It was 20 days, says Samir, before he finally found out what had happened to his son, after he sought help from human rights organizations.

Lawyers from the Al Mezan Center for Human Rights discovered that other young men who had gone before Ahmad to Erez and been interrogated had apparently implicated him, claiming he had been in possession of a gun and an explosive for one of the Gaza-based militias. (Samir claims the “explosive” was actually his son’s insulin vials.)

Ahmad maintained his innocence during his four hours of interrogation at Erez, and as a result, he was transferred to an Israeli prison in Ashkelon. After five consecutive days of further interrogation, Ahmad could take no more and confessed. The charges: ” membership in a terrorist organization, observation of and passing information to the enemy, providing services for a terrorist organization and possession of firearms.”

“He was subjected to practices that we consider torture and ill treatment, mainly in the form of forced stress positions for long hours, such as sitting on a chair with hands cuffed behind,” the Al Mezan legal team said in a response to an inquiry. “Torture is unconscionable at any time, but it is particularly cruel when the victim is already medically vulnerable.”

Samir, who receives information on his son from the attorneys and the Red Cross, said he learned later that his son had been told that his father was in jail as well, and that therefore he must cooperate with the Shin Bet, Israel’s internal security agency. Meanwhile, Physicians for Human Rights learned that Ahmad was being denied all medical treatment except for his insulin, and has been advocating on his behalf. Samir says the latest news he received is that one of his son’s arms may need to be amputated.

Today, Ahmed is still in prison, although he has been transferred to Beersheba. Based on his “confession,” he was offered a plea bargain of 33 months incarceration or a shortened list of charges with sentencing to be determined. He rejected the “bargain” and at a Mar. 24 session, the court set a new hearing for June, to allow the prosecution to call its witnesses – the police who conducted the interrogation.

“Every Palestinian has the right to health, which is enshrined in Article 25 of the Universal Declaration of Human Rights,” Al Mezan stated in a March 2009 report. “This right must be provided without any conditions hinged to it, a principle that Israel repeatedly violates. The Shin Bet has on numerous occasions pressured Palestinians in need of external medical treatment to become informants in exchange for permission to leave Gaza.’’

According to Physicians for Human Rights, agents interrogate Gazans who want to enter Israel for medical care about their relatives, neighbors and friends; those who don’t cooperate often don’t get travel clearance. It has received reports from 32 patients in Gaza who say they were denied permission to leave for refusing to cooperate with Israeli questioners at the Erez Crossing by answering questions about the political affiliations of relatives, friends and acquaintances.

Samir has hired an Israeli attorney to plead his son’s case, but so far doesn’t have the money to pay her. He will sell his house, he says, if he has to.

“My son is not guilty!” exclaims Samir in frustration and pain. “If my son was a militant, would I have tried to take him through Erez? He is just a boy who needs treatment, who is being used as part of their game.”