BEIT UMMAR, Occupied West Bank, Apr 19 2010 (IPS) - A young Palestinian man died in Israeli custody as hundreds of Palestinians took to the streets of villages and towns across the West Bank and Gaza to commemorate Palestinian Prisoners Day on Friday, Apr. 16. 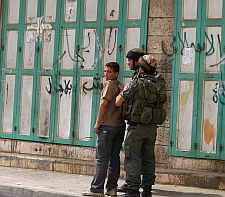 Raed Abu Hammad, 31, was found dead in his prison cell late on Friday after spending the last 18 months in solitary confinement.

The Hamas member was sentenced to 10 years in jail in 2005 for attempted political assassinations.

His lawyer Tareq Barghouti told the media that Hammad was on medication and psychologically ill.

The exact cause of his death is still being investigated after the Israeli authorities announced an autopsy was being carried out.

However, rights groups and fellow Palestinian prisoners, both current and former, have accused the Israeli Prison Services of maltreatment and neglect.

“Hammad is the 198th Palestinian prisoner to die in Israeli custody since 1967 when Israel occupied the West Bank and Gaza,” said Shawan Jabarin from the Palestinian human rights organisation Al Haq in Ramallah.

“Many of the deaths have been from natural causes. However, Israel has carried out a deliberate policy of maltreatment and neglect by denying appropriate medical treatment to ill Palestinians. This has aggravated their physical condition and hastened unnecessary deaths,” Jabarin told IPS.

“Several prisoners died from force feeding when they embarked on a hunger strike. Tubes were forced through their noses which subsequently caused damage to their livers.

“Furthermore, approximately 20 Palestinians have died during Israeli interrogation from beatings and torture since the outbreak of the first Palestinian Intifada in December 1987,” explained Jabarin.

Israeli human rights organisations forced the domestic intelligence agency, the Shin Bet or General Security Services, to change its methods of interrogation after taking the torture of Palestinian prisoners to Israeli courts.

There are now limits to the amount of physical abuse Israeli interrogators can apply to Palestinian prisoners during interrogation.

Palestinian prisoners and their families also accuse the Israelis of forcing the prisoners to endure unhygienic conditions, sub-standard food, beatings and the denial of family visits.

There are currently approximately 10,000 Palestinian prisoners in Israeli custody. Hundreds are being held in administrative detention or without trial.

Meanwhile, the Israeli Defence Forces (IDF) sealed off the village of Beit Ummar in the southern West Bank, north of Hebron, where a prisoner commemoration ceremony was taking place.

Several photographers working with IPS took photos of Israeli soldiers using a young boy as a human shield despite being shot at by the soldiers.

IPS managed to enter the village prior to the exits and entrances being blocked by soldiers as clashes broke out between Palestinian youths and Israeli soldiers.

The confrontations broke out after military jeeps entered the agricultural village and attempted to break up the commemoration.

The village committee had laid out hundreds of chairs and organised music for the celebration when it was stormed by the IDF.

Youngsters in the village had spent months rehearsing and preparing for the event which included speeches, dances, plays and music.

“You’ve got five minutes to evacuate the area,” barked the Israeli military commander to the organisers who tried to negotiate the peaceful withdrawal of the soldiers. “If you don’t leave we will arrest you all. This is not open to negotiation.”

“I tried to negotiate with the soldiers. I told them if they withdraw from the village we will control the youngsters. The place where the celebration was taking place is far from the main road and the settlements,” Mousa Abu Maria, an activist leader from the village, told IPS.

But the youths remained defiant and sat down on the ground and refused to move. After the Israeli soldiers withdrew to the entrance of the village, the commemorations continued.

Military jeeps then returned and were met with a hail of stones. They responded with tear gas, rubber-coated metal bullets and some live ammunition.

Sabri Ibrahim Awad, 15, was left bruised and limping after he was used as a human shield by the Israeli soldiers as he rode his bike past them. He was not involved in the clashes.

He was grabbed by the scruff of the neck and marched in front of the soldiers as rocks showered down. He was then cuffed and arrested and thrown into the back of a jeep.

Israel security forces have used Palestinians as human shields both in Gaza and the West Bank despite international law and Israeli courts ruling this illegal.

The Goldstone Report admonished the Israelis for endangering the lives of Palestinian youngsters during Israel’s war on Gaza at the end of 2008, beginning of 2009.

While the Gazan youths faced live fire and Awad “only” faced rocks, Abu Maria said it represented a dangerous escalation in Israeli tactics.

“The soldiers have abused many youths in the village. But to take a completely innocent youngster and expose him to this danger is totally unacceptable,” Abu Maria told IPS.

In another development, the IDF has placed the West Bank under a complete lock-down for several days as Israel celebrates its independence.

This is the third time since the beginning of March that Palestinians from the West Bank have been sealed off from Jerusalem for days.