SAPUCÁI, Paraguay, Apr 19 2010 (IPS) - Uncontrolled expansion of cattle farming in Paraguay has led to “cutting down trees and planting exotic grasses,” says environmentalist Guillermo Gayo. To put a halt to this practice in the southern department of Paraguarí, the foundation he heads has implemented what is known as “permaculture.” 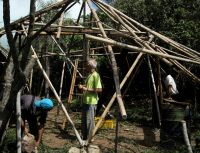 Just looking around one of the highest points of Roke Hill, where the project is being developed, one can see the threat of expanding pastureland.

A decade ago, the Takuara Renda Foundation (“the bamboo place” in the Guaraní language) settled near the town of Sapucái, on a hilltop that forms part of a remnant of the Atlantic Forest, which extends through parts of Argentina, Brazil and Paraguay, with just seven percent of its original coverage remaining.

For its project of simple integration with nature, the non-governmental foundation chose an area that had been severely degraded by forest fires and logging.

“The technology we are developing aims for production without much transformation of what is natural,” Takuara Renda director Gayo told Tierramérica.

The foundation promotes permaculture, which is the design and maintenance of small productive ecosystems, including the harmonic integration of people and their homes, in order to meet their needs in a sustainable way.

This approach utilises materials like tacuara cane, a type of bamboo, and plant fibres for bioconstruction.

Takuara Renda is not trying to establish bamboo as a crop in the area, but rather is using it to help the degraded forest to recover.

“If you cut a branch off the bamboo, another grows in its place. That is how we are replacing the wood,” he said.

At the Roke hill project, one will find various species of tacuara cane, which are used in different ways. The foundation’s land holding is just six hectares, but its efforts are felt far beyond.

On 25 surrounding hectares, a process has begun to expand the forest with larger tree and bush species, and an emphasis on preventing fires and halting extensive cattle operations.

The 2008 Agricultural Census found that Paraguarí department, with some 500,000 hectares of forage for cattle, was home to four percent of the 12 million head of cattle in all Paraguay.

Also found in the area are exotic grasses like the Brachiaria, originally from Africa, which pushes out native species like the mbocayá palm (Acrocomia aculeata) as it extends across the terrain.

The foundation has reservoirs for treating water – using natural techniques – to be used for sanitation and washing, and ultimately recycled for irrigation. Also, rainwater is stored in tanks for these purposes.

Takuara Renda’s connection to the local community has strengthened over the years, in part due to the workshops it provides for how to use natural resources in sustainable ways.

According to Gayo, the community adopted sustainable farming techniques to grow food, based on their experiences with the foundation, whose own garden includes a variety of food plants, some commonly consumed in the region, and others previously unknown here.

“At Takuara Renda, they taught me about vegetarian foods, which is interesting because they eat only vegetables that are prepared in unusual ways,” Myriam Ramírez, a young student from a nearby community who visited the foundation with classmates.

“I was surprised by the house made from tacuara cane and its furniture,” said Ramírez, who also participated in workshops about bioconstruction, where she learned about building structures out of bamboo.