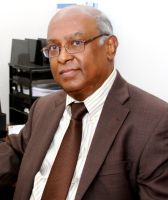 Dev Kar: For every one dollar low income countries get in official development assistance, more than 10 dollars go out the back door. Credit:

This is according to the latest research report titled “Illicit Financial Flows from Africa — Hidden Resource for Development” from Global Financial Integrity (GFI), a programme of the U.S.-based Center for International Policy (CIP) which studies cross-border flows of illegal money.

The CIP is an independent organisation that promotes foreign policy for the U.S. that is based on international cooperation, demilitarisation and human rights.

The report asserts that “the enormity of such a huge outflow of illicit capital explains why donor-driven efforts to spur economic development and reduce poverty have been underachieving in Africa”.

Despite increasing policy and academic attention being focused on corruption, the report estimates that bribery and theft by public officials accounts for only three percent of the total.

Criminal proceeds (including trafficking in drugs and counterfeit goods) amount to a third of the sum, whereas corporate tax evasion (mainly through trade mis-invoicing) totals 65 percent of the yearly illicit flows.

The authors applied standard economic models of the World Bank and the IMF in the study. Excerpts from the interview follow:

Q: The limited availability of economic data could significantly understate the problem. Could illicit financial flows out of low-income African countries be even more significant? A: Low-income countries (LICs) are typically very poor reporters of data. I have seen this at the IMF’s statistics department, where I worked for 13 years, as well as during many technical assistance missions in Africa.

The reason LICs tend to be poor reporters is that their statistical budgets are under heavy pressure. Many of these countries are barely able to meet their basic social and development expenditures for health, education, drinking water, and so forth.

The production of statistics tends to be very expensive for developing countries where budgets are under tremendous stress. We have adjusted for the missing data but the gaps are very substantial.

Q: According to your research, some of the countries worst affected by illicit capital flight are those experiencing conflicts, as in the Horn of Africa? A: Indeed. Some countries like Somalia and Sudan, which have had long-standing conflicts, or Eritrea, which fought Ethiopia, have not been exempt from illicit financial flows.

Q: The report mentions that the rate at which capital has left Africa illicitly has accelerated in the last decade? A: Yes, it is accelerating. One of the main reasons is that we have seen a pick-up in the economic growth rate, at least prior to the financial crisis (of 2008).

But the increase in growth was not matched by improvements in governance, or a strengthening of institutions, or commensurate improvements in economic policies and law and order.

So, economic growth may be due to robust oil prices or commodity prices but when income rises, it mostly goes into capital flight. Without proper economic governance, increased growth prospects merely fuel capital flight instead of stemming it.

Q: Did you observe anything specific regarding the ratio of development assistance compared to capital flight in African LICs? A: Yes. We have to consider this ratio cautiously because, on the one hand, LICs tend to be high recipients of official development assistance (ODA) but, on the other hand, their illicit financial flows tend to be understated. So your ratio of illicit flows compared to ODA is going to be equally misrepresented.

And in African LICs, that means your ratio will actually be much less than 10 to 1 overall: for every one dollar they get in ODA, more than 10 dollars go out the back door via illicit capital flight. And even that estimate is understated.

Q: The report seems to point to financial deregulation and liberalisation as a factor in the illicit flight of capital from LICs. A: Yes, the liberal(ised) organisation of financial markets has facilitated capital flight in many ways.

One is that all these years we have witnessed increasing integration of financial markets, without commensurate oversight of these transfers, which Western governments should have demanded from their financial institutions.

We have offshore centres, tax havens, and even traditional banks in developed countries which are only too happy to receive these illicit funds out of developing countries — no questions asked.

Another is that traditional banks such as UBS have even facilitated capital flight from the U.S. And this came to light because aggressive investigations were carried out by (U.S.) tax authorities. African countries can scarcely afford to pursue such infractions, so these occurrences do not come to light in LICs.