GABORONE, Apr 22 2010 (IPS) - The Lesotho Highlands Water Project will move into its second phase in 2010. The first phase has been praised as a shining example of transboundary water sharing in Africa, but community dissatisfaction may mean a rough ride for its extension. 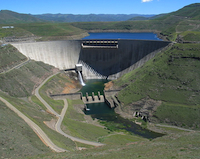 The Lesotho Highlands Water Project (LHWP) is the largest on the continent, transferring water from the Malimatso, Mtsoku and Senqunyane rivers to South Africa’s industrial heartland in Gauteng province.

Peter Makuta, acting chief executive of the managing utility, the Lesotho Highlands Development Authority, explains that a second phase is needed because of projected water shortages in South Africa.

“It’s always been in the plans, now it is the time to realise it by actually implementing hardware on the ground, with a view to collect more water.”

Makuta says the second phase will also allow Lesotho to secure its electricity supply through additional hydroelectric generation. “Although we’ve been able to produce much-needed power, it hasn’t been enough. We’ve had to buy electricity from South Africa, even Mozambique at times, (in order) to meet our needs.”

On paper the LHWP has been a success, winning many awards including the World Bank’s Environmental Efficiency Award for a project of that magnitude. But Mampiti Matete, senior lecturer at the University of Lesotho, says there’s simmering discontent amongst communities.

“My thinking is that it was the first project of its kind, and people did not understand the magnitude of the project and the impact it was going to have on them,” says Matete.

“It’s only now that the project has happened and people have been compensated that the majority of them realise that the compensation they received is not adequate or does not match the losses that they incurred.”

The project’s own documents say 321 households were relocated or resettled to make way for the LHWP. Households were offered yearly financial compensation in exchange for lost land, or “green compensation” which provided water and sanitation facilities to allow them to resume farming and herding livestock on new land. Matete says consultation will have to be much better this time around.

“Consultation processes in the next phase have to be intensified to empower local people, so they know what they are negotiating about.”

There is every reason to think communities will be heard.

The waters of the LHWP are today part of the responsibility of the Orange-Senqu River Commission (ORASECOM), one of the river basin organisations participating in a workshop in Gaborone on Apr. 20-21. The workshop, the fourth in an annual series designed to strengthen transboundary water organisations in the region, saw the launch of guidelines on several topics, including one on stakeholder participation.

The focus of the workshop was the yet-to-be adopted guideline on benefit-sharing in river systems; during debate and discussion of this, the issue of participation at the grassroots level came up.

Nomathemba Neseni, director of the Institute for Water and Sanitation Development based in Zimbabwe, said that too often discussions of benefits and sharing proceed without an adequate social impact assessment that can qualify and quantify where the benefits – and burdens – fall.

She said she had listened to a full day of conceptualising and case studies without once hearing about gender. Using irrigation for agriculture as an example, she pointed out that failing to recognise that very few women in Southern Africa enjoy secure land tenure could result in unequal benefits within communities targeted for such development, as the profits from increased yields or value of the land would not be shared by all.

“If poverty reduction is Southern African Development Community strategy, we need to be able to qualify it (down to) the household level,” says Neseni.

The guideline on stakeholder participation says community consultation is essential to decision-making. Proper consultation ensures that policy is based on shared knowledge, experience and evidence; is influenced by the experiences and opinions of those affected; and that innovative and creative options are considered in designing and implementing water policy.

These would seem to be precisely the things that passed local villagers in Lesotho by during the planning of the LHWP’s first phase.

The guideline offers planners concrete recommendations: starting with identifying stakeholders and classifying them in terms of interests, resources, perceptions, relationships and power. An enabling environment should be created, including clear responsibilities, budgets and deadlines, as well as an outline of the methods of consultation that will be used.

The use of surveys and questionnaires to get detailed knowledge of various users’ experience is called for; as are interviews and focus groups with key stakeholders to get in-depth inputs on particular issues, priorities and preferences for what could be done.

Finally, the importance of communication is underlined, with media campaigns, billboards, and merchandise; making analysis and technical information available using fact sheets, newsletters and articles; and using art and entertainment along with posters, school curriculum and other educational materials to bring the information to the widest possible audience in a form that is readily understood.

At the end of this, the guideline says it is essential to act on the results of consultation. Representative advisory groups should map out solutions and a formal framework for implementing projects and addressing issues should be set up.

As the second phase of the LHWP gets under way, planners and communities should make full use of the guidelines to negotiate terms that will benefit everyone.