Arizona Law Already in Effect for Some Immigrants

PHOENIX, Arizona, May 26 2010 (IPS) - It’s not the law yet, but for undocumented immigrants like Ismael Palafox and his family, SB 1070 is already a reality. 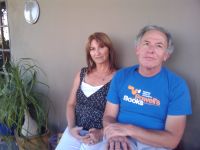 The controversial new Arizona law that is making headlines internationally will take effect at the end of July. For the first time in U.S. history, it makes it a state crime to be an undocumented immigrant.

Palafox was questioned by the Apache Junction Police in front of his family in connection with dumping trash in the wrong place and turned over to immigration authorities. He is now in the Florence Detention Centre facing deportation to Mexico.

“I can’t believe this is happening to us,” Socorro, his wife, told IPS in Spanish. “Why are they enforcing this law if it’s not in effect already? They’re abusing their power.”

The nightmare started on May. 22. It was a regular Saturday morning and Palafox was supervising yard work for Stephen Welker, a long-time acquaintance who lives in a remote area in the Arizona mountains. Palafox brought his wife and 13-year-old son. Palafox had sustained an injury on his right arm, severely limiting his movement, and needed his family to do the actual work.

After they were done landscaping, Welker asked Palafox, 41, to go with him to a deserted area three minutes away to dump the trims. On their way back, a private citizen, who had called the sheriff’s office, followed them. The sheriff left without asking any questions, Welker said, and decided to drive around the neighbourhood to see if they were still around. He didn’t want Palafox to be fined for something that was his idea.

When he returned, he said the Apache Junction Police had showed up at his doorstep asking questions about illegal dumping.

“I admitted to dumping, and that I’ve done it a dozen times, always with organic items,” said Welker, 57. “They said we’re going to give you a warning at this time. We are going to cite you but we will have to talk to your help. I said: ‘He had nothing to do with this, if you want to fine somebody you can fine me’.”

Then the officer told him there was reasonable suspicion to believe that Palafox was in the country illegally.

Ina Welker said Palafox’s 13-year-old son had to be an interpreter between his father and the police. They asked Palafox if he had a driver’s license from Arizona but he didn’t. They also asked him if he was illegally in the country. His son translated the question in between sobs.

“They were really pressuring him to say something,” said Socorro, 40. “They don’t have a heart, they saw my son crying and they didn’t care.”

Palafox was taken in one patrol car to the police station and his wife and son in another.

Immigration and Customs Enforcement (ICE) released his wife and child for humanitarian reasons, she said.

“Unlike the police, they were compassionate,” she said.

But Ismael was taken to the Florence Detention Centre, where he faces deportation.

The police didn’t fine Welker for illegal dumping and didn’t file charges against Palafox. They didn’t file a police report on the incident either, which made it harder to trace exactly what happened, said Captain Thomas Kelly.

The new state law would allow local police departments to question someone over their immigration status for a civil offence like throwing trash on the street – similar to what happened to Palafox.

The current Apache Junction policy is to question people about their immigration status when they come into contact with the police for a serious crime, said Kelly. When asked if his officer violated the policy, he said the department would look into it.

Kelly said that Ismael volunteered the information that he was undocumented. And that he willingly agreed to be taken to the station for farther questioning by ICE about his immigration status. His wife and the Welkers tell a different story.

“Willingly?” she said. “I was there. We were told we have to go with them and that ICE was going to decide.”

Welker and his wife believe this was an unfair arrest and part of an anti-immigrant climate caused by SB 1070.

“They didn’t even see him dumping anything,” said Ina Welker. “I feel shame for how this unfolded, that this has to happen to people,” she added.

Welker had been critical of the new law in the past. She is Jewish and can’t help but to draw a connection to the persecution faced by her family in Nazi Germany.

Palafox’s wife is desperate. Her husband was in a construction accident last October, breaking his right arm and wrist. He had several operations and is still in pain.

Cooperation between local police and immigration authorities is not new. For years several law-enforcement agencies in Arizona have worked in conjunction with ICE, turning over undocumented immigrants by contacting a call centre. But most agencies have policies focused on questioning people involved in serious criminal activities.

The Phoenix Police Department, the largest in the state, has a policy that protects victims and witnesses of a crime from being questioned about their immigration status. Officers are not expected to interrogate an immigrant for a traffic stop or a minor offence. And they have to call a supervisor for approval before they call ICE.

Rep. Kyrsten Sinema, a Democrat who opposed SB 1070, arguing it would hurt community policing and discourage victims of crimes from contacting authorities, has been receiving a number of calls with similar stories. In some instances, they relate to U.S. citizens who were questioned about their immigration status by the police or harassed by other individuals who wrongly believed they were illegally in the country.

“We know this is in direct result of SB 1070,” she said. “People feel emboldened to behave like this.”

Sinema is encouraging others to come forth with their cases and document them to create a database that can help identify a pattern of practice in certain communities. She thinks the U.S. Department of Justice may choose to file a lawsuit against this law because it is unconstitutional and “because of some of the things we have already seen, even though there’s no lawful authority to apply it”.