MELBOURNE, May 3 2010 (IPS) - Sara Aboueid, 15, and Jamillah Noordin, 16, wear uniforms similar to countless numbers of footballers around the world. 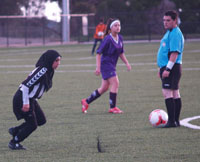 A footballer in hijab is in action for the Brunswick Zebras team. Credit: Stephen de Tarczynski/IPS

Every week during Australia’s football season, the young women don shirts and shorts in their club’s colours. Like several of their teammates, both also wear a ‘hijab’.

Wearing the hijab, an Islamic headscarf which covers women’s hair and necks but not their faces, “means a lot because it is my religion and I can’t go against that. If I did take it off [to play football] I would be doing something wrong,” Aboueid, a goalkeeper for the Brunswick Zebras, a football club in inner-suburban Melbourne, tells IPS.

While both Aboueid and Noordin have always played football in the hijab without experiencing problems, controversy surrounding a footballer’s right to wear the religious headscarf continues to make headlines.

In 2007, an eleven-year-old girl was barred from playing football in Canada because of her hijab while most recently, the International Federation of Association Football (FIFA), the sport’s governing body, replaced the Iranian girls’ football team with Thailand for the upcoming Youth Olympic Games in Singapore.

FIFA’s ruling, made public in April, was that the hijab, which the Iranian players wear, contravenes players’ on-field equipment rules. According to law four of the international rule book, a player’s “equipment must not have any political, religious or personal statements.”

Under FIFA regulations, either the game’s governing body or the competition organiser can impose sanctions where breaches of this law occur.

Responding to FIFA’s implication that the hijab is a religious statement, the young Brunswick Zebras midfielder tells IPS that “this is my identity. And if that is a problem, then go to every soccer player with a tattoo of a cross on their body and tell them to remove it.”

“That is equal and that is the same and once that happens, we will accept that we can’t play with a hijab on,” adds Noordin.

In Australia, where football has taken great strides in popularity and participation levels of late, it remains unclear how the sport’s local authorities will react to FIFA’s banning of the hijab.

Australian football’s governing body, Football Federation Australia (FFA), has yet to reply to IPS despite several attempts to clarify the legality of the hijab being worn on football pitches here.

The sport’s governing bodies in Victoria and New South Wales (NSW), Australia’s two most populous states, have provided some information.

A spokesperson for Football Federation Victoria (FFV) tells IPS that players are permitted to wear the Islamic headscarf “on the proviso that the hijab is the same colour as the main colour of the playing shirt.”

While this response gives the all-clear – at least for now – for players in Victoria, where the Brunswick Zebras compete, local media has reported that Football NSW will follow the lead of the FFA.

But like Aboueid and Noordin, former player Afifa Saad opposes FIFA’s banning of the hijab.

“Big bodies like FIFA shouldn’t be discouraging females from playing. Considering it’s a universal game, it’s played worldwide, what message are they sending?” she adds.

Saad, a Muslim of Lebanese background, began wearing the hijab at secondary school. While playing at an elite level for the South Melbourne football club in 2004, she was at the centre of a storm of controversy after a referee told her to remove her hijab.

Saad failed to comply with the referee’s demand. “That incident was an absolute shock,” she recalls. “Two minutes before kick-off, he actually told me that I couldn’t take part in the game.”

Despite receiving support from her teammates and opposition players, as well as explaining to the referee that the hijab “was a religious thing,” Saad was not allowed to take the field.

The FFV, then known as the Victorian Soccer Federation, later ruled that Saad had not been a victim of religious discrimination and that the referee had only wanted the player to wear a hijab of a similar colour to her team’s uniform.

This is not how Saad, who played variously as a forward, a midfielder and a goalkeeper, remembers the incident. The FFV “had to back him up. He didn’t want me to wear the scarf at all,” she says.

Now a physical education teacher, Saad intends to play indoor football following the birth of her child. But she will not play without wearing the hijab.

Saad argues that instead of being banned, hijab-wearing footballers should be an inspiration.

“A lot of people have the misconception, including Muslim women, that once you wear a scarf, you can’t do anything, that you can’t work or play sport. That’s a total myth. You can do whatever you want to, the sky’s the limit,” she says.