PARIS, May 31 2010 (IPS) - The bluefin tuna, an “apex predator” fish of the Atlantic Ocean and Mediterranean Sea, is condemned to extinction within two years by the inaction of the industrialised North and international regulatory bodies, predict marine biologists and environmentalists. 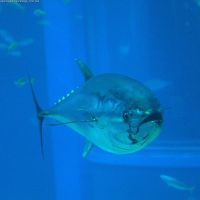 Although such warnings are not new, the activists insist that it is especially timely, given the inability of the world’s wealthy nations, in particular the members of the European Union and Japan, to prevent the disappearance of marine species that are essential to maintaining ecosystem balance.

“According to the assessments of the International Commission for the Conservation of Atlantic Tunas (ICCAT), the current Atlantic bluefin tuna population is less than 15 percent of the original,” François Chartier, head of Greenpeace-France’s oceans campaign, told Tierramérica.

ICCAT is an inter-governmental organisation responsible for the conservation of this and related species in the Atlantic and adjacent seas, particularly the Mediterranean.

Charles Braine, head of the sustainable fishing programme at WWF-France, said a study by his organisation in 2009 “suggests that the bluefin tuna will disappear if the necessary measures are not enacted immediately.”

Braine told Tierramérica, “The extinction of this fish would have unforeseeable consequences for the ecological balance of its habitat.”

In its Global Biodiversity Outlook 3, published May 10, the United Nations warned that excessive fishing will continue to deteriorate marine ecosystems and will lead to the disappearance of fish populations.

Marine biologists use two criteria to determine the threats to marine life: the reproduction rate, described as high, medium or low; and the reference population, which serves as a point of comparison for the census of the current population.

“Because the rate for the bluefin tuna is considered ‘medium,’ the reduction to less than 15 percent of the original population is an indicator of extreme risk of extinction,” explained Chartier.

The danger for the bluefin was accentuated by the failure of the 15th Conference of Parties to the Convention on International Trade in Endangered Species of Wild Flora and Fauna (CITES), held Mar. 13-25 in Doha, Qatar, to declare a ban on sales of this type of tuna.

Chartier described the attitude of the European Union and Japan as “incomprehensible and unscrupulous” for not supporting Monaco’s motion to ban international trade in bluefin tuna.

Although “the EU apparently supported Monaco’s proposal to ban all fishing of this species, at the same time it asked for more studies to document the risk of extinction,” he said.

He argued that the European governments know well that there is abundant and unquestionable evidence of the threats to the species.

Additional beneficiaries of the industry are tuna companies in Japan and in countries of the Mediterranean basin, such as Algeria, Croatia, Turkey, Tunisia, Libya and Morocco.

All of the bluefin caught in the Mediterranean is fattened for a short time on the farms operated in waters off Malta, Spain’s Balearic Islands, Greece and Croatia, to be exported to Japan.

Braine pointed to another WWF study, this time about the size of the tuna fleet in the Mediterranean basin countries, which in 2008 showed the incompatibility of the fleet’s catch capacity, the fish populations and the legal catch limits established by ICCAT.

In November, ICCAT set the maximum catch of Thunnus thynnus at 13,500 tonnes for 2010. But the capacity of the boats using purse-seine nets in the Mediterranean is 55,000 tonnes.

“That means, given the operating and maintenance costs of an oversized fleet, either the fishing companies are operating at high losses or they are not respecting the legal limits,” Braine said.

Chartier, meanwhile, pointed to ICCAT’s internal contradictions. “In 2008, the scientific committee of the commission established that a maximum catch quota of 8,000 tonnes offered a 50-percent probability of ensuring the recovery of the species by 2023,” he said.

In other words, the maximum official quota of 13,500 tonnes is very high, according to ICCAT’s own criteria. Furthermore, said the French expert, the fishing companies won’t respect the limits because otherwise most of their boats would have to be left at dock.