BRAZIL: Moves to Legalise Abortion Shut Down by Campaign

RIO DE JANEIRO, May 5 2010 (IPS) - Politically awkward when it comes to negotiating alliances and congressional support from the right, the decriminalisation of abortion has been dropped from a Brazilian government human rights plan — and from the election debate, even among candidates who have traditionally been open to the prospect. 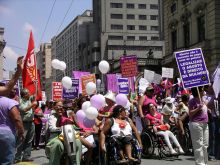 The Brazilian women’s movement’s applause for the inclusion of sexual and reproductive rights in the draft version of the government’s 3rd National Programme on Human Rights (PNDH 3) has been cut short by the decision to eliminate this controversial issue from the text.

The government’s decision to modify the draft programme came after a campaign headed up by the Catholic Church, which went so far as to refer to leftist President Luiz Inácio Lula da Silva as “Herod” — an allusion to the king of Judea who ordered the killing of baby boys in and around Bethlehem after the birth of Jesus Christ, according to the Bible.

The decriminalisation of abortion had been included in the draft PNDH 3 on the grounds of “women’s autonomy to make decisions about their own bodies.” Paulo Vannuchi, the chief sponsor of PNDH 3 and minister of the Special Secretariat on Human Rights, referred to its removal as a “healthy step back.”

In 2007, during a visit by Pope Benedict XVI to Brazil — home to a larger number of Catholics than any other country in the world — Lula pledged that his government would never present a bill in Congress to legalise abortion, which is currently allowed only in the event of rape or when a pregnant woman’s life is endangered.

A recent study by the Social Medicine Institute at the Rio de Janeiro State University revealed that the risk of death as the result of an abortion is much greater among black and mixed-race women than white women.

The study found that black women were 2.5 times more likely to die from the termination of a pregnancy.

"Black women are more vulnerable. They don’t have the resources to go to clandestine clinics and they tend to use dangerous abortion methods that increase the risks and complications," said Mario Monteiro, co-author of the study.

For instance, in the northeastern state of Bahia, where the majority of the population is black, abortion has been the leading cause of maternal deaths since the early 1990s, according to figures from Ipas.

The study leads to the reflection that "the criminalisation of abortion is a death sentence for black women," said Margareth Arilha, executive director of the Citizenship and Reproduction Commission at the Brazilian Centre for Analysis and Planning.

The researchers are convinced that the decriminalisation of abortion will contribute to reducing the high rates of abortion-related complications and deaths.


Several other proposals were also withdrawn from the draft text of PNDH 3, namely the mediation of agrarian reform-related land disputes, the creation of a truth commission to investigate human rights abuses during the 1964-1985 military dictatorship, and a ban on the display of religious symbols in public places.

The draft PNDH 3 is now set to be discussed in the Senate, following two rounds of discussion in the Chamber of Deputies and study by a number of congressional committees, but it is difficult to predict when it will actually be passed by the two houses of Congress.

The four initiatives cut from the draft all have in common that they were fiercely opposed by a “conservative offensive,” say social activists.

Kauara Rodriguez, an expert on sexual and reproductive health and rights at the Feminist Studies and Advisory Centre, told IPS that their elimination resulted from “opportunistic pressure exerted by conservative sectors in the upper echelons of the current power structure, in the context of the campaign for the upcoming presidential elections in October.”

The campaign to choose a successor to Lula — who is barred by electoral rules from running for a third term — officially kicks off in June, but is already the subject of widespread discussion in Brazil, where political parties and leaders have begun mobilising forces.

An alliance of “ruralists” — lawmakers who defend the interests of large landowners– big media groups, the military, and the Catholic Church is said to be behind the pressure to take the four initiatives off the table.

Another common factor among the axed proposals is that they were all initially included in response to repeated demands from civil society during the lengthy consultation process held prior to the drafting of the text.

Women’s organisations had celebrated the recognition of sexual and reproductive rights as human rights as a major victory, Rodrigues commented.

Vannuchi is now pursuing a middle ground in Congress regarding the issue of abortion; while he is not able to satisfy some sectors, he might at least be able to avoid the dissatisfaction of all.

At a hearing in the Chamber of Deputies, Vannuchi said he will seek the inclusion in the programme of a public debate on the decriminalisation of abortion, in line with United Nations recommendations.

In doing so, he will highlight the fact that abortion is above all a public health issue, and that bans have not eliminated abortions anywhere.

Beatriz Galli of Ipas, a non-profit organisation that works around the world to advance women’s sexual and reproductive rights, said that in this way at least the UN “language” will be maintained. However, she ruled out the possibility that any amendments made to PNDH 3 in Congress would reincorporate the “more advanced” language that referred explicitly to decriminalisation.

In this country of 190 million people, at least one million clandestine abortions are performed every year. These result in 250,000 admissions to public health facilities for the treatment of complications stemming from unsafe illegal abortions, which are also one of the four leading causes of maternal deaths in Brazil.

The criminalisation of abortion fosters a range of violations of the human rights of women, “who are persecuted, mistreated, humiliated, and often die because of the lack of adequate assistance from the state,” said Rodrigues.

Galli also attributed the government’s attitude to the pressures typical of an election year. The approval briefly granted to such a controversial issue was undoubtedly viewed as a strategic error that threatened its interests, she maintained.

The issue is also being carefully avoided by presidential candidates across the political spectrum.

Dilma Rousseff, presidential candidate for the ruling Workers Party, is currently silent on the subject — despite the fact that last year, she publicly stated that although having an abortion “is not an easy thing for any woman,” this could not be used to justify not legalising it.

José Serra, the candidate for the opposition Brazilian Social Democracy Party and currently the frontrunner in the polls, is also avoiding the subject of abortion. But as minister of health in 1988-1992, he helped secure the approval of guidelines for health care professionals regarding the termination of pregnancies resulting from sexual violence.

Marina Silva, Lula’s former environment minister and now the Green Party presidential candidate, maintains her ambiguous stance on the subject. She calls abortion a “complex” issue connected to “spirituality”, while at the same time she has advocated public debate on the legal status of abortion and proposed a referendum on the matter, noted Galli.

A spokesperson for the minister of the Special Secretariat for Women’s Policies, Nilcéa Freire, told IPS that she was “not commenting on the issue” when asked for her opinion. According to the spokesperson, withholding comment is a means of not highlighting the disagreements within the government regarding the matter.