BOGOTA, May 27 2010 (IPS) - Colombian presidential candidate Antanas Mockus said he “shares the horror” over the so-called “false positives” — young civilians killed by the army and passed off as guerrilla casualties in the military’s counterinsurgency campaign. 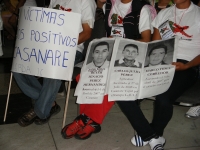 The phenomenon is “an extreme manifestation of the short-cut culture, the anything goes culture,” the former Bogotá mayor, who has a real shot at winning the presidency in Sunday’s elections or — more likely — in a June runoff, told foreign journalists Wednesday.

Members of more than 30 army battalions recruited young men with false job offers and took them to faraway locations, where they were shot and dressed up as left-wing rebels (or less frequently as far-right paramilitaries) and passed off as combat casualties.

The phenomenon really took off after right-wing President Álvaro Uribe first took office in 2002, and reached a peak when Mockus’s main rival, Juan Manuel Santos, was defence minister from July 2006 to May 2009.

The “false positives” scandal broke in the press in September 2008.

The attorney general’s office is investigating 2,077 cases of extrajudicial killings presumably committed by the security forces, including 274 in 2006 and 505 in 2007. The number of cases identified then dropped to 156 in 2008 and to seven cases, involving 16 victims, to 2009.

The human rights monitoring database at the Jesuit Centre of Investigation and Popular Education (CINEP) in Bogotá has documented 501 cases involving 1,113 victims of extrajudicial killings between 2001 and 2009. But it clarifies that its investigations do not cover the entire country.

The latest polls indicate that Mockus and former defence minister Santos, the candidate of the pro-Uribe Party of the U, will face off in a second round on Jun. 20, because neither is likely to garner 50 percent of the vote Sunday.

Mockus stated: “I’m sure that neither the president (Uribe) nor the minister (Santos) were masterminds behind the false positives.”

He pointed out that it was Santos’s predecessor in the Defence Ministry, Camilo Ospina, who issued, in November 2005, a secret directive offering incentives for “positives” or casualties in the counterinsurgency effort.

Mockus compared that instruction to a U.S. army directive during the Vietnam War that led to the infamous March 1968 massacre by U.S. troops of at least 350 unarmed women, children and old men in the village of My Lai.

“Is the tragedy solved by judging these two people?” Mockus asked, referring to Uribe and Santos. What can be judged, he stated, is “the eventual level of negligence in detecting and correcting the situation.

“I do not believe they are legally responsible, but I do see a moral, or perhaps political, responsibility,” he said.

Santos insists that when he was defence minister, he and President Uribe “denounced the problem and reached the decision that had to be taken, with transparency in front of the whole country.” He says a total of 15 measures, “which were effective,” were adopted to counter the phenomenon.

In November 2007, Santos issued a new directive that provided rewards for captured and “demobilised” combatants, rather than offering incentives for officers who showed the fewest army casualties and the largest number of enemy casualties.

“Reports of false positives were drastically reduced after November 2008; they fell by a factor of over 100,” Santos recently stated, repeating what he has said on every occasion that the issue has been raised in the campaign.

But it was not until October 2008 that the government dismissed 27 army officers during an unexpected visit to Colombia by United Nations High Commissioner for Human Rights Navi Pillay.

Impunity for the perpetrators is what 16 families of “false positive” victims from Soacha, a sprawling working-class suburb to the south of Bogotá, fear. Over the last 10 days, 39 members of the military implicated in the extrajudicial killings were released on bail, although 25 — including colonels and majors — are still in prison awaiting trial.

The strategy of their defence lawyers is to use delaying tactics and secure their release from preventive detention on the grounds that they have not been formally indicted within 90 days of their arrest, as established by Colombian law.

At the same time, the military justice system is demanding that the cases be transferred to its jurisdiction.

Mothers and widows of the victims have received death threats. The brother of one of the victims was killed, and a noncommissioned officer who reported an extrajudicial killing was murdered as well. The Mothers of Soacha, as the women are now known, sent a letter Monday to International Criminal Court (ICC) chief prosecutor Luis Moreno Ocampo.

Over the last two years, a series of legal, political and other “de facto impunity” mechanisms have undermined the possibility of getting at the truth and obtaining justice and comprehensive reparations, says the letter, which calls for the ICC to take a hand in the matter.

Lawyer and journalist Felipe Zuleta, who produced the documentary “Poverty, a crime that is paid with death”, asked the attorney general’s office in January to investigate Uribe and Santos for collusion — that is, “negligence on the part of government officials with respect to crimes against humanity,” he said in response to a question from IPS.

Zuleta said the argument set forth by Santos “is complete proof.” He maintained that the fact that the number of “false positive” killings has plunged since “the government found out… means it was a controlled crime.

The Mothers of Soacha are indignant that Santos is a presidential candidate. “Not because he pulled the trigger,” said one, “but because he was the commander-in-chief of the armed forces, and has to assume responsibility.”

The United Nations’ special rapporteur on extrajudicial executions, Philip Alston, released a 36-report page Thursday that says the Colombian security forces committed “a significant number” of “false positive” killings over the past decade, and that the number of murders began to climb after 2004.