PARIS, May 17 2010 (IPS) - The World Bank has described its recent increase of 3.13 percent in the voting power of emerging economies as a reform “to enhance voice and participation of developing and transition countries”. But the shift has actually decreased a third of African countries’ share of votes. 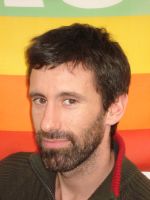 Sebastien Fourmy: "The fundamentals of decision-making at the Bank have been carefully preserved." Credit: Oxfam-Agir Ici

Eighteen sub-Saharan countries have thus lost a measure of their already modest influence in the institution’s decision-making process. Nigeria and South Africa are hardest hit, their voting powers having been decreased by about 10 percent.

Only oil-rich Sudan – whose president has been indicted by the International Criminal Court on suspicion of war crimes – has seen its share of votes increase.

The World Bank, internationally mandated with financing development projects, has long been criticised by civil society and recipient countries as unrepresentative of those it claims to be helping. Sub-Saharan Africa, the target of many of its “poverty reduction” programmes, retains a total of less than six percent of the institution’s voting rights.

Finally responding to critics, the Bank has in recent years indicated some intention towards reforming its governance and making it more inclusive of its purported beneficiaries. Its Istanbul Declaration of October 2009 committed to “protect the voting power of the smallest poor countries”.

Criticising the adjustments, head of research for anti-poverty campaigner Oxfam, Duncan Green, noted in a blog entry titled “The World Bank breaks its promises on Africa’s voting power” that “the reform reflects the shift in global GDP (gross domestic product), and so benefits the big emerging economies, not the slower growing economies in Africa”.

Adds Sebastien Fourmy, who follows global financial institutions at Oxfam’s French chapter: “This reform is an attempt at making nice with the main emerging world players, such as China and Brazil, in the hope that they will contribute a larger share of the Bank’s funding.

“This comes at a point where Europe has growing difficulties in meeting its financial commitments to development,” he explains. “European countries have therefore agreed to a minor reduction in their voting powers but most are still clinging to their chairs.”

“And, of course, the United States remains the only member with the power to veto the Bank’s decisions,” Fourmy confirms. This is because the Bank’s voting system weighs votes according to countries’ shares of the world’s GDP.

South Africa’s finance minister, Pravin Gordhan, reportedly said his country was disappointed with the reforms as sub-Saharan countries’ say was diminished despite ongoing pressure that the Bank should boost the voices of developing countries in decision-making at the Bank and the International Monetary Fund (IMF).

World Bank president Robert Zoellick admitted that, “the change in voting-power helps us better reflect the realities of a new multi-polar global economy where developing countries are now key global players”. Yet, endorsement of the shift in voting power was “crucial for the Bank’s legitimacy”, according to Zoellick.

The British watchdog initiative called the Bretton Woods Project, which monitors the World Bank and the IMF, said in a recent report that: “a closer look shows that the World Bank will continue to be overwhelmingly dominated by rich countries.

“Developing countries represent over 80 percent of the world’s population and the Bank’s membership. They are where almost all of the Bank’s activities take place” — and yet, “its governance remains illegitimate and outdated,” the report argued.

Fourmy agrees: “In the end, the fundamentals of decision-making at the Bank have been carefully preserved.”

Moreover, “even if votes were effectively reformed in favour of its poorest members, decisions will still be taken by consensus rather than votes. Out of the 24 administrator countries that usually craft consensus decisions at the Bank, only two are from sub-Saharan Africa,” explains Fourmy. “There was talk of including a third one but that idea has not been mentioned in a while,” he adds.

“We hope that emerging economies whose voting rights were increased are going to bear increasing responsibility in the funding of development but that remains to be seen,” says Fourmy. “So far, none of them have expressed clear commitment or a detailed vision of their approach to development assistance.”