ATHENS, May 6 2010 (IPS) - The firebombing of a bank by demonstrators protesting against severe austerity measures, which killed two women and a man, appears to Greeks as a sign of social deterioration arising from their country’s financial crisis. 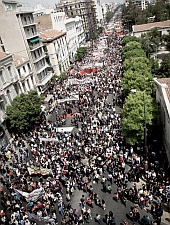 “I wonder if someone will ever think that apart from those loonies throwing molotovs into a building full of people, there are others who are also responsible for the situation we have ended up in,” said Christina Vasilikou, a demonstrator, commenting on Wednesday’s tragic events.

“I’m really afraid that things will deteriorate rapidly after this news spread around… here people will get scared, and abroad the Greek crisis will keep being a good story for the media and attract speculators,’’ Vasilikou added.

Greeks are struggling to come to terms with an austerity plan announced by the Pan-Hellenic Socialist Movement (Pasok) government and imposed by the European Union (EU) and International Monetary Fund (IMF) as a condition for a 110 billion-euro (140 billion US dollars) bailout.

The list of measures agreed to among the troika of Pasok, the European Commission, the IMF and the European Central Bank is the severest austerity plan ever imposed on a EU member. It appears to be a copy and paste of the structural adjustment plans imposed on East European countries after the collapse of state socialism and the Latin American countries during the 1990s.

Agreeing to the package on May 2, Greece announced budget cuts of 30 billion euros (38.1 billion dollars) over the next three years.

Wages and benefits have been reduced to an average loss of income of over 1,500 euros for hundreds of thousands of people. Pension benefits are being reduced, and new legislation on access and age limits for claiming pensions planned in the next few months is introduced, a general deterioration in social security standards seems imminent.

A second increase in value added tax will be introduced in three months, raising indirect taxes up to 24 percent plus additional tolls to be added on goods like cigarettes, alcohol and fuel as well as temporary taxes on very profitable companies and self- employed entrepreneurs.

The impact on average incomes will be severe for an already indebted public and it is going to lead society into deep recession, said Georgos Sgouros, an economist with a media group in Greece.

“Everyone imagines what the plan will bring about, none has felt it in the pocket yet. But by next September, when the measures will have kicked in and a new wave of measures will be imminent for Greece, in order to keep promises made to the troika, then people will feel what is really happening,’’ Sgouros said.

The austerity measures and the bailout are issues related with the stability of the euro zone and are a political issue beyond Greek leverage, added Sgouros. “The Greek economy, the real productive structures, is in an even worse situation than that of Argentina at the time it collapsed in 2001”.

“It’s difficult for someone out of here to understand that in Greece in 2010 there is no basic infrastructure, that bureaucracy is so slow that you need days to arrange simple issues, that you need to corrupt public officials to arrange for the well-being of your company,” Sgorous said.

“It’s a backward, de-industrialised economy and this makes recovery very painful, if not impossible. Moreover, Greece belongs to the euro zone so it lacks even the tool for devaluating its currency. The country looks defenceless in front of the crisis,’’ Sgorous added.

To make matters worse, the country’s major earner, the tourism industry, could be hit hard by Wednesday’s events. Within hours Britain and Bulgaria issued warnings to their citizens who were planning to travel to Greece.

Additionally, news reverberating around international media that the Greek government may be unable to implement the austerity plan, could not have inspired confidence.

There are now fears that the recession will drive thousands of people into unemployment and poverty that may be unprecedented in Greek modern history.

“A study by Greek banks has predicted that 120,000 more Greeks will fall into unemployment in the next year,” Christina Kopsini, an analyst for the daily ‘Kathimerini’, told IPS. ‘’Of these, 60 percent will stay in long-term unemployment and 40 percent in heavy debt, meaning that many will have to survive in conditions of stark poverty.

‘’This is dangerous, people are already enraged, and after Wednesday’s events things will polarise intensely.’’