PARIS, May 13 2010 (IPS) - Members of the Haitian diaspora responded with “massive and spontaneous” aid immediately after the Jan. 12 earthquake, with thousands of professionals leaving jobs abroad to go and assist their compatriots, according to a government minister. 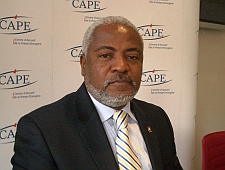 Now the Haitian authorities are hoping that even more expatriates will return to settle in the Caribbean country as it undertakes its immense reconstruction programme.

“We were touched by their massive, spontaneous and generous reaction after the earthquake,” he added. “But we have to focus on long-term efforts as we move ahead.”

The aim of his tour is to promote the government’s mobilization plan to entice professionals back, with offers of good salaries, housing and transportation, Paraison said.

“We know that people get accustomed to a certain standard of living abroad so we have to facilitate their return by providing definite benefits,” he told IPS in an interview. “We have to think of things that will make their lives easier in Haiti.”

He said the government was also launching a public awareness campaign so that Haitians who had remained in the country would not feel that they were being displaced by those who opted to return.

“We have to admit that there might be some small problems with feelings of resentment, but we cannot escape the fact that we need to replace the function of those who lost their lives in the earthquake,” he said.

Calling Paris the “capital of the Haitian diaspora in Europe”, Paraison met with groups based in France as well as with French officials, including immigration minister Eric Besson. Repatriation will need coordination from various parties, he said.

An Anglican priest by training, Paraison is also focusing on faith-based communities to spread the word, and he held talks with various congregations here. He was scheduled to meet with groups in Switzerland and Spain as well, ending with a diaspora conference in Barcelona.

Paraison’s visit coincided with events in Paris commemorating the abolition of slavery. Several associations also held demonstrations and a march on Monday, calling on France to pay reparations to its former colonies who suffered from the slave trade.

In the case of Haiti, protesters with the activist MIR (Mouvement International pour les Reparations / International Movement for Reparations) said there was a special obligation as the Caribbean country bore a heavy financial and human toll in its violent break from France two centuries ago.

Following its independence, Haiti was forced to pay France 90 million gold francs in exchange for recognition of the country’s new status and also as reparation for “lost lands and income” in the slave revolt that led to autonomy. The country had to borrow heavily from international banks to pay the sum plus interest, sinking ever deeper into poverty. The payments to France were completed only in the mid-1940s.

In 2004, then Haitian president Jean-Bertrand Aristide calculated the value of the sum Haiti had to pay as 21 billion US dollars at current rates.

Paraison told IPS that Haiti was open to whatever France wanted to do in the area of cooperation and assistance, but he added that his main concern was “mobilizing the diaspora” and appointing a permanent representative for Haitians living here.

Metropolitan France is home to about 75,000 Haitians, among the 4-million strong expatriate community, according to figures from the Haitian embassy in Paris. Those living abroad comprise 83 percent of all Haitian professionals, resulting in a severe “brain drain” for the country, said ambassador Fritzner Gaspard.

Most expat Haitians are based in the United States and Canada. A significant number live in the Dominican Republic and other Caribbean countries such as Cuba and Jamaica, while others have settled in Europe, Africa and other regions.

Even if a small minority of these people return to Haiti, their contribution would boost the reconstruction efforts, as the country lost more than 20,000 professionals among the estimated 300,000 victims of the earthquake, Gaspard said. In addition, the “anguish and difficulties” following the disaster have forced countless others to emigrate, he told IPS.

Haiti is now working with the United Nations to offer incentives to skilled Haitians, with part of reconstruction contracts being reserved for such workers.

At the International Donors’ Conference held in New York at the end of March, international institutions and 48 countries pledged 5 billion dollars in short-term assistance and an additional 10 billion dollars for Haiti’s long- term reconstruction needs.

If some of these funds can be used to pay ex-pat Haitians for their skills and services, and to provide a decent level of living, even more will be tempted to return, said Mackendie Toupuissant, president of the Platform of Franco- Haitian Associations (PAFHA).

“There is a really strong willingness to return,” he told IPS. “We have cases of people who have already gone back, not necessarily to Port au Prince but to other areas. Sometimes it was a lifelong project that was speeded up by the events of Jan. 12, and sometimes they had certain skills that they wanted to contribute, particularly in the construction sector.”