BERKELEY, California, May 27 2010 (IPS) - It might be hard to imagine that a woman’s attendance at a university would be contingent upon the way she dresses. 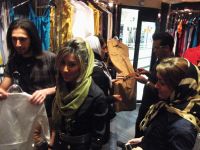 But during Friday Prayers at Tehran University on May 21, Ayatollah Jannati, an influential member of Iran’s Guardian Council, suggested just that, demanding that a strict version of the Hijab Islamic covering be a requirement for female students.

“The university and students are both under your control and you can select the students based on this condition,” he told officials. “If not, let the Disciplinary Committee enter the action. A student needs his [sic] grade, he has no choice, he will do as you order him.”

Hijab – covering the whole body except the face with a scarf or veil – is mandatory for all Iranian women. But in a country in which almost 70 percent of the population is under 30 years old, and where women have outnumbered men in university attendance two-to-one over the past several years, more and more young women are adopting a sort of stylish Hijab that is coming under growing fire from conservatives.

During the summer, when temperatures rise to over 30 degrees C., the Hijab gets skimpier. The sleeves of the fashionable manteaus (women’s dress tunic) are cropped shorter, exposing wrists and forearms. Hems rise well above the knees and the more tailored designs accentuate the natural curves of the female form.

This, over tight jeans that may expose a bit of the ankles and a head scarf that may slide back a bit, or dance around the neck – well, you get the picture.

Ali Motahari, a conservative Member of Parliament, said earlier this month on Iran’s national television, “If there is no standard Hijab, they won’t know where to stop.”

“It would turn into Europe, rest assured it would be like Europe,” he said, “Especially because Iranian ladies have fertile grounds for this (not wearing Hijab) and there was an example of this during the Shah’s era.”

Before the 1979 Revolution, the Hijab was optional. Now after 30 years of Islamic dress codes, mainly invented by the Iranian authorities, many women are edging towards the pre-revolution lifestyle and attire.

It has not escaped the notice of religious hardliners, particularly with the one-year anniversary of Iran’s disputed Jun. 12, 2009 elections approaching. In a recent sermon, Kazem Sadighi, Imam of Tehran’s Friday Prayers, drew a connection between extramarital sex and natural disasters.

“[Attractive women] will cause young men to feel stirred and to rebel and follow their desires [and] then they would engage in illicit sex and fornication would increase in the society,” he said.

“According to our religious narratives, this is one of the reasons for some sudden calamities,” he said. “When fornication is on the rise, earthquakes abound.”

Efforts to enforce a strict Hijab go back to 2003, when the Women’s Cultural and Social Council of the Supreme Cultural Revolution Council approved the Development Plan for Hijab and Chastity. In 2005, it was disseminated to various government offices and organisations. But in 2009, the media announced that President Mahmoud Ahmadinejad had put the plan on hold – curiously right around the time of his re-election.

This year, authorities have finally begun to implement the plan, which defines specific duties for two dozen cultural and military organisations involved in enforcing the Hijab and a culture of chastity. For example, the police force is responsible for 21 tasks, the Islamic Republic of Iran Broadcasting (IRIB) is responsible for 32 tasks, and so on.

However, many women, like 29-year-old activist Saba Vasefi, do not welcome government interference in their private lives.

“I believe Hijab is an invisible political tool for the stagnant, patriarchal politics… a view that gives priority to woman’s sexuality over her other human dimensions,” Vasefi told IPS in a telephone interview from Tehran.

“Undoubtedly, the totalitarian system’s patronising way of thinking encourages people to deny their bodies, wear unkempt clothes, and gravitate toward sadness, and it has no room for human health and development. This thinking cannot be effective in reducing abnormal behaviour in the society,” she said.

“The type of covering that the government promotes and is enforcing lacks harmony with the Iranian society’s common preferences,” a Tehran University professor told IPS on the condition of anonymity. “Even in the Quran, Hijab and clothing are addressed as relative issues and not absolute ones and nowhere in the Quran is there a mandate for a particular dress code.”

Ali Qolizadeh, a student activist, told IPS that the authorities have stepped up monitoring of people’s dress and that “for example, in most universities they have placed individuals at the entrance gates who issue notices to female students.”

“Other than the type of clothes, this problem could also be caused for male and female students who have had normal conversations throughout the campus,” he said. “In many cases, just for a simple conversation with a classmate from the opposite sex, the Disciplinary Committee would accuse students of illicit relations.”

A mandatory Islamic dress code is not what the grand Ayatollahs promised the Iranian people in the fist place. Right after the 1979 Revolution, one of Ayatollah Khomeini’s close allies, the influential cleric Ayatollah Mohammad Taleghani, said, “Hijab is not mandatory, even for Muslim women, let alone for religious minorities…We do not say women shouldn’t go to offices [to work], and nobody else is saying it either.”

“Islam and Quran and religious authorities wish to maintain a woman’s dignity…It is not mandatory either. How did our women live in villages since the emergence of Islam? Did they wear chadors?” he asked.