Q&A: Exposing the “Masters of the Word” in Latin America

SANTIAGO, May 7 2010 (IPS) - If control of the media was not so heavily concentrated in Latin America, the situation of inequality in the region would be more actively challenged, says Martín Becerra, an Argentine media specialist who presented his latest research study here in the Chilean capital this week. 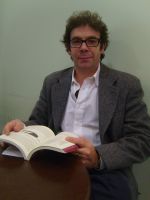 “Los Dueños de la Palabra. Acceso, estructura y concentración de los medios en la América Latina del Siglo XXI” (Masters of the Word: Media Access, Structure and Concentration in Latin America in the 21st Century), co-authored by Becerra and fellow Argentine researcher Guillermo Mastrini, was published in 2009 in Argentina thanks to the support of the Press and Society Institute, a non-governmental organisation based in Lima, Peru.

In 2006, Becerra and Mastrini wrote “Periodistas y magnates” (Journalists and Magnates), the first publication stemming from their ongoing research.

Their aim is to provide an update every four years on the so-called “info-communications” industries: the press, radio, television, publishing, the recording industry, the film industry, telecoms, and the internet. Becerra spoke with IPS this week at the presentation of his new book in Santiago.

Q: Who are the “masters of the word” in Latin America? A: There are a small number of corporate groups that have a decisive influence on “info-communications” activities. The most important are Globo, Televisa, Clarín, Prisa, Cisneros and the group controlled by Ángel González of Mexico, which has a major presence in Central America. In telecommunications, there are Telmex and Telefónica.

The situation in Latin America as a whole is mirrored on a national scale. In Chile, for example, you have the Edwards family (which owns the El Mercurio newspaper chain) and Álvaro Saieh (owner of the Copesa media conglomerate).

Q: Do these groups and magnates share a common profile? A: Many of them have their origins in a patriarchal, strongman figure, which is very typical of the rise of political and business leaders in Latin America.

The figure of the “pater familias” who made his way using methods that were not always spotlessly clean is revealed in research studies like “Los magnates de la prensa” (The Press Magnates) by Chilean journalist María Olivia Mönckeberg (2009). In a number of cases, the building of their fortunes has been linked to business dealings with dictatorial regimes.

Over recent decades these groups have been transformed and diversified. Today we are dealing with conglomerates that encompass everything from banks to radio and television network chains. The media entrepreneurs of the past have been replaced by huge economic groups; in order to facilitate their activities in the rest of the economy, they need media operations to give them lobbying power.

Q: What is the viewpoint represented by these big media? Mönckeberg says that in Chile, they represent the ultra-conservative neoliberal right… A: In general they are right-wing — because they defend the status quo. These media groups could not have attained their enormous size — which, by the way, would be prohibited in developed countries — if it weren’t for the complacency of political powers that in some cases were in the hands of dictators.

Those political powers have granted them privileges that would come to an end as a result of any reforms aimed at democratising the media, which are on the agenda in Latin America today.

Q: What is the extent of the concentration of media ownership in Latin America? A: More than 82 percent of all information and communications activities are controlled by the top four operators, which vary from country to country, since this is an average figure. The influence of these operators is excessive.

In addition to this, it should be noted that in Latin America, with the partial exception of Televisión Nacional de Chile (Chilean National Television, a public broadcaster), there are no public media akin to the BBC. In this kind of context, there is no balance, no public force that can compensate for the influence of the big commercial media.

This has a lot to do with the unequal societies we have built in Latin America, the most inequitable region on the planet. I believe that if control of the media was not so highly concentrated, the situation of inequality in Latin America would be more actively challenged.

Q: You mentioned the media democratisation agenda in the region today… A: Yes, it’s a heterogeneous agenda, because the governments and political and social movements promoting it vary considerably. The experience of Evo Morales in Bolivia and Rafael Correa in Ecuador is very different from that of (Luiz Inácio) Lula da Silva in Brazil and Tabaré Vásquez (2005-2010) in Uruguay.

But these four experiences, and we could also mention Argentina, share in common that for the first time ever in these countries, the concentration of media ownership was challenged, and it was established that non-profit, civil society entities have the same right to radio and television broadcasting licences. This is a major breakthrough.

Q: What is your view of the situation in countries like Argentina and Venezuela, whose governments complain that the big media act essentially like opposition parties? A: The situation is very different. In Venezuela there is the RESORTE Law (on Social Responsibility in Radio and Television) passed by (President Hugo) Chávez, which I do not agree with, because it interferes with content. This is not the case of the Argentine law, which is very liberal in terms of content — everyone can say whatever they want.

There have been very few periods in the history of Argentina where you will find such a harsh backlash against the president in the media. This means that there really is freedom of the press in Argentina.

In my country, the media react badly, and this is very ineffective from a journalistic point of view because they react like a political party and break the “reading contract”, the term used by (Argentine intellectual) Eliseo Verón to describe the relationship between a newspaper and its readers.