BANGKOK, May 16 2010 (IPS) - Burning tyres and buses with plumes of smoke billowing from them. Sniper shots and grenade attacks. Deaths and injuries. No-go zones in the Thai capital. 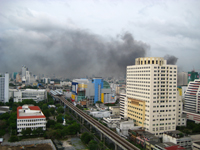 These are what Bangkok residents have been seeing since the evening of May 13, when the Thai government blockaded the area that anti-government protesters have occupied since early April in order to pressure them to end their campaign.

The clashes have taken place around the perimeter of the more than four square-kilometre protest area that soldiers sealed off, after power, water and mobile phone networks were cut off on Thursday.

Though other parts of Bangkok are unaffected, the army has declared a few areas “live-fire” zones, where clashes continue. On Sunday, the government gave protesters a new deadline to leave the Rajprasong site by Monday.

Since Thursday, 29 people have been killed and at least 221 injured, many of them civilians, officials said Sunday.

“Perhaps this was really coming, I don’t know,” sighed Lek, an employee. “But how did we let it come to this? And how can this continue for long?”

“The unidentified armed men, including snipers, are most scary for me,” added Pakorn Lertsatienchai, a researcher at Chulalongkorn University. “I’m afraid the situation will turn to anarchy.”

Journalist Sujane Kanparit said he feared more casualties, reaching a point where the military could intervene, and “guerrilla warfare” after the crackdown. “Thailand has reached a point of no return,” he said.

Loud silence hangs over what used to be the bustling financial and shopping districts of this city of more than six million people, who have been living with the protests by the red-shirted United Front for Democracy against Dictatorship (UDD) aimed at having a new election held in this South-east Asian country.

Entry has been barred to the Rajprasong shopping district, which is barricaded with rubber tyres and sharpened bamboo poles and where officials say some 6,000 protesters, many from the poorer regions of the Thai north- east but much fewer than the tens of thousands before, remain.

On national television, Prime Minister Abhisit Vejjajiva said Saturday the lockdown was “the only way to restore law and order in this country, as we earlier attempted to use other methods, such as holding negotiations.”

“We cannot retreat because we are doing things that will benefit the entire country,” he said.

Government spokesman Panithan Wattanayagorn said, “We hope in the next few days to return to normalcy.” He spoke in English on television Saturday, a rare move to address foreign audiences as well.

The government hopes that tightening the noose around Rajprasong will force an end to the protests, which began on Mar. 12 at a different protest site in old Bangkok.

UDD leaders have said they will stay till the end, but asked the government to stop using force. “This call is for preventing unarmed red shirts from being killed or injured,” red-shirt leader Natthawut Saikua said, saying talks can resume if the crackdown stops.

But officials said they were asking women, children and the elderly to leave the protests and take the buses provided to go back to their homes outside Bangkok.

There have been reports of a split among UDD leaders, saying the more moderate ones have left because they found acceptable Abhisit’s offer of an election on Nov. 14 and since the protests were alienating the public. Some high-profile leaders, like Veera Musikapong, have not been seen in the protest site since last week. Others said he had a cold, denying a split among the leaders.

After Abhisit made his poll offer in early May, many expected the protests to end. But UDD leaders, whose patron is the fugitive ex-prime minister Thaksin Shinawatra, have continued with them after seeking accountability by Abhisit and his deputy for deaths in the Apr. 10 dispersal of protesters.

Last week, Abhisit revoked his election offer. Thus far, opinions on the blockade seem divided. A survey released Saturday by Suan Dusit Poll showed that 51.33 percent of Thais supported the move to reclaim Rajprasong and a little over 40 percent disagreed because it had led to deaths.

At the start of its protests in March, the UDD demanded a new election, saying the Abhisit government came to power in 2008 not through an electoral mandate but by manoeuvring by the military. This, they said, occurred after the elite threw out leaders – allies of Thaksin – that they voted in through elections in recent years.

At one point, more than 100,000 people, many from the north and north- east who feel deprived of real representation by the Bangkok-based elite, had joined the red protests.

Confusion remains about the clashes and ‘third forces’ in them. The government says some red shirts are armed and Abhisit warns of “terrorists” among them, but UDD leaders say protesters do not have guns.

Sniper fire and grenade attacks continue but those behind them are unknown. On Thursday, tensions rose after a sniper shot a renegade general with the red shirts, Khattiya Sawasdipol, in the head.

Independent website accounts report troops shooting at protesters who take them on, but the government says soldiers use live fire only in defence. A journalist reported seeing some red shirts with handguns.

In an atmosphere with few rules, some find a resumption of talks hard to imagine. In the same survey by Suan Dusit Poll, 53.25 percent of respondents said if they were the prime minister, they would continue talking to the red shirts.

“I don’t think hope for talks is possible,” said Pakorn. “Apart from Thaksin, I don’t see anyone who can be the representative for the UDD to hold talks with the government.”

Added Sujane: “I have no clue on how and in what way this bloodshed is going.”