MONROVIA, May 26 2010 (IPS) - In a small office tucked behind the stairwell in Liberia’s Ministry of Education, the once-proud staff of the Girls’ Education Unit appear defeated. 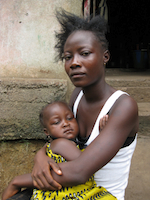 Berniece Johnson, now 19, says poverty led to sex with an older man to pay for fees and a uniform. Pregnancy forced her to quit school altogether. Credit: Bonnie Allen/IPS

The workers in this fourth floor office, entrusted with charting a new course for the education of the country’s girls and women, have no salaries, no budget, and few projects under way.

“We attend meetings. We attend workshops. But when we put a project proposal together, it is not supported,” sighs the Unit’s director, Lorpu G. Mannah.

Despite the 2005 election of Ellen Johnson-Sirleaf, Africa’s first female president, and the introduction of free and compulsory primary education, many young girls in this post-conflict West African nation continue to drop out of school to cook and clean for their family, or earn a meagre living selling food or fresh water on the streets.

When Johnson-Sirleaf came to power four years ago, the Harvard-trained economist inspired dreams of a better future for the country’s women. With much fanfare, she launched a National Policy on Girls’ Education in April 2006, and hailed girls’ education as the “cornerstone” of development in Liberia. The Girls’ Education Unit was opened shortly after to implement the policy.

At Miatta Fahnbulleh’s privately-run Obaa’s Girls Foundation in downtown Monrovia, girls in tie-dyed purple skirts squish together on short wooden benches and dutifully recite the alphabet for the teacher.

Fahnbulleh, 62, pays out $300 U.S. scholarships to more than 100 girls every year to cover all of their expenses and keep them in school.

"These girls are under a lot of pressure at home," she said. "Six brothers and sisters. A mother and grandmother. All of them looking at her, saying, ‘What are you doing for us?’ A 17-year old girl is the breadwinner of the family. So if you want her to stay in school, you need to ease the financial burden."

The feisty woman, with a bright pink headscarf, vocally criticises the Johnson-Sirleaf government for receiving international acclaim for its Girls’ Education Policy and "talking big" but then failing to budget money to make schools safe for girls, cut fees, or pay for uniforms, copy books, toiletries, and transportation for girls.


Other measures aimed directly at the retention of girls include providing health services to girls in school to boost self-esteem, paying out small scholarships for their tuition, uniform, and copybooks, and conducting a nationwide awareness campaign for parents.

Four years later, the Ministry of Education (MOE) has still not earmarked a budget to implement the policy.

Liberian families continue to struggle with rising secondary school fees. Only one out of 10 grade school teachers are women. Counseling, life skills and health services are almost non-existent. Girls are forced to trade sex for grades with teachers, or barter sex on the streets for financial support.

Statistically, the gender gap in Liberia’s elementary schools has narrowed. The most recent school census revealed that girls accounted for 47 percent of students registered at Liberia’s public primary schools, but only 31 percent at public high schools in 2007-2008.

Those numbers are misleading though. The census only measures enrolment at the beginning of the school year and does not consider the high drop out among girls several months later due to family obligations, teenage pregnancy, or poverty.

“As far as we know, there has not been any commitment from the Ministry to Education to see what can be done in the implementation of the national policy,” said Sumo.

This prompted UNICEF to stop financing girls’ education projects through the Liberian Government in January 2009, instead choosing to funnel money to international NGOs. UNICEF also decided to revoke its funding of the Girls’ Education Unit’s salaries and operational costs as of January 2010.

“We have a work plan but it has not been sponsored by donors or government,” insists Mannah, who confesses deep frustration that the education ministry is ignoring the Girls’ Unit.

There has been little accountability for the past four years at the Education Ministry. The Minister during that time, Joseph Korto, was removed from his post in May 2010, shortly after he was named in an audit for alleged misappropriation of huge sums of money.

Audits to track development loans and aid, as part of the requirements for debt forgiveness, revealed dubious scholarship schemes and false claims for new schools that were abandoned or left incomplete.

At his swearing-in ceremony, the new education minister, Othello Gongar, stated, “I have not come to MOE to criticise the works of my predecessors, but to rather start from where they stopped in order to make the system viable.”

Gongar pledged to lobby the national legislature to increase Education’s overall budget from roughly 8 percent to 25 percent of the $347 million dollar national budget.

In the budgetary cash contest, Liberian girls and women are competing with war-destroyed roads, electricity grid, limited running water and sewage systems, a dysfunctional justice system, and other institutional and infrastructural problems.

“What about the human resource?” demands Miatta Fahnbulleh, a leading advocate for girls’ education in Liberia. “Yes, I want roads. Yes, I want 24-hour electricity. But I also want to live in a country where 9 out of 10 people aren’t ignorant… We need to develop minds,” she emphasises, pointing her finger to her temple.

Back at the Ministry of Education, Lorpu Mannah shows up each morning at the Girls’ Education Unit. Though she’s no longer paid, she still writes proposals to international NGOs requesting money to sponsor night schools for teenage mothers, counseling centres in high schools, or scholarships for women who want to become teachers.

“To be frank, I do it out of sympathy for the young girls.”