JOHANNESBURG, May 14 2010 (IPS) - The North should pay reparations to the South for the effects of climate change. 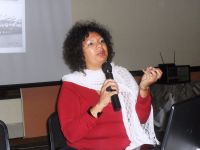 This is the position of Professor Patrick Bond arguing the case for ecological compensation that he believes the North owes to the South for causing climate change.

He told IPS that, “once a climate obligation debt is established, it’s a simple question of how the funds should be delivered”. Bond is director of the University of Kwazulu Natal’s Centre for Civic Society (CCS) in Durban, South Africa.

Citing a pilot project where Germany is paying reparations to a community in Namibia, Bond said the reparations should be paid directly to women because they suffer the burden of looking after the family and therefore of climate change. Men often choose to squander whatever little money is left or made available to the family.

Under the pilot project, the German government is paying people living in a community in northern Namibia monthly allowances as compensation for the privations of the colonial period when Germany controlled the territory.

Bond’s view was echoed at the climate justice conference where he was speaking. It was hosted by the Economic Justice Network (EJN) of the Fellowship of Christian Councils in Southern Africa (FOCCISA) on May 5-6 in Johannesburg. The Christian Councils are church-based organisations that work in the southern African region to solve societal problems such as climate change.

“We are experiencing unusual drop in crop yields in many LDCs in SADC which cannot be ascribed to anything other than climate change,” Mithika Mwenda, coordinator of the Nairobi-based Pan African Climate Justice Alliance (PACJA), told IPS. PACJA works to promote sustainable development and environmental justice.

Another example is Mozambique which has suffered from either floods or periodic droughts caused by little rain since 2001. As a result, its government has been forced to spend money to bail out struggling citizens and to finance adaptation strategies rather than development initiatives.

“We can’t blame the governments because the shift away from, for example rain-fed agriculture, costs huge sums. That is where we call upon the international community which caused climate change to come to the party,” said Mwenda.

Regarding the recurring floods in Mozambique, Bond said, “we expect to see more of these. Shrinking coastlines cause the physical displacement of people, typically the poor and most vulnerable. In this case it would be women and peasant farmers (frequently the same people) who are on the frontline because they lack the capacity to adapt.”

In Zambia poor people face more than just the effects of climate change but also have to deal with a government in denial. “We are experiencing floods even in (the capital) Lusaka but the government has deaf ears. They claim that the floods are caused by bad drainage systems,” George Chibwana, advocacy officer of the Zambia Christian Council (ZCC), told IPS.

“In all this, women suffer the most because traditionally they are the ones who take care of the children, ensure that food is available and prepared for the family, till the land and are often the ones to gather firewood,” said Chibwana.

“Apart from this, cholera is on the rise and there is also a significant rise in malaria which has always been the number one killer disease in Zambia,” he added.

Christian Aid estimates that 182 million people in sub-Saharan African countries, where three quarters of the world’s LDCs are located, could die of diseases directly attributable to climate change by the end of this century.

In Zimbabwe, a country which has registered negative economic growth for the past 10 years, effects of climate change are a new threat to an otherwise overburdened population. For the past five years, the country’s low-lying areas, such as the Lowveld, Zambezi Valley, Muzarabani and those areas close to Mozambique, have witnessed recurring floods.

This has forced many communities to move to higher ground and then losing their pastoral and agricultural land and assets in the form of livestock and crops.

Recent events in the SADC region, such as poor rains, have resulted in low yield harvests in countries such as Malawi, Swaziland, Zambia, Mozambique and Zimbabwe.

Michelle Pressend, coordinator of the Cape Town-based Trade Strategy Group (TSG), explained to IPS that “poverty goes hand in hand with reliance on natural resources, which are often depleted by climate change effects.” The TSG is an informal network of trade activists interested in developing strategies for orienting trade towards sustainable development.

According to a PACJA’s 2009 climate change report, titled “The Economic Cost of Climate Change in Africa”, climate change will combine with social, economic and environmental factors to exacerbate Africa’s vulnerabilities in the future, including water, food security, diseases, conflict and degradation of natural resources.