A Reform Movement by and for Undocumented People

DETROIT, Jun 25 2010 (IPS) - Hundreds of grassroots organisations came together at the U.S. Social Forum here to discuss strategies in the fight for immigration policy changes that would put an end to criminalisation and the militarisation of the border with Mexico. 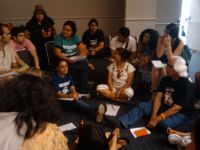 Resolutions adopted during a People’s Movement Assembly on Thursday included a push to end policies like 287(g) and Secure Communities that allow local police to enforce federal immigration laws, and the passage of the Dream Act, a piece of legislation that would legalise the status of undocumented students.

“We are looking at it by redefining the immigrant rights movement by the people that are more affected,” said Tania Unzueta from the Immigrant Youth Justice League in Chicago, Illinois, referring to immigrants.

Unzueta is part of a growing group of undocumented youth across the country that has staged civil disobedience actions to push for the passage of the Dream Act, even risking their own deportation.

“This is the first movement led by undocumented people,” said Felipe Matos, a member of the Trail of Dreams, a group of students from Florida that has travelled across the country to raise awareness about the plight of undocumented youth.

“Our movement goes beyond legislation, beyond comprehensive immigration reform,” he said. “It’s key here for us to stop calling ourselves criminals.”

Several grassroots organisers echoed those comments and were critical of the current blueprint for “comprehensive immigration reform” – which is heavy on enforcement – proposed by New York’s Democratic Senator Chuck Schumer, as well as the policies set forth by the Barack Obama administration.

“The proposals that are being offered by the government would never meet the needs or the rights of our communities. It’s going to take much more than legalisation,” said Arnoldo Garcia, director of the immigrant justice and rights programme at the National Network for Immigrant and Refugee Rights (NNIRR).

“What we are imagining in the discussions is what kind of relationship people will have with the government. So whom do we go to, if the abuser is the person that is supposed to protect us? And the government is the main abuser,” he said.

The border state of Arizona figured prominently during the forum as ground zero for human rights violations due to recent passage of SB 1070, a law that would criminalise undocumented immigrants and anyone who assists them.

One of the resolutions at the assembly on Thursday included a call to action from other organisations to come to Arizona in support of the local movement against the new law, which takes effect on Jul. 29.

“Everyone is really afraid and really alarmed of what’s happening in Arizona, folks are realising it is coming to their cities,” said Carlos Garcia, an organiser from the Arizona PUENTE Movement.

Garcia said the new state law has essentially already been in place in other parts of the U.S. in the shape of programmes like 287(g) and Secure Communities.

Other groups stressed the significance of understanding the root cause of immigration and the global forces at play behind the movement of people, including military policies and trade agreements supported by the U.S.

“In terms of the immigrant rights struggles and concerns in the U.S., if we do a technocratic fix, a certain kind of people legalised, certain kind of control, securing borders, it ignores why people are coming, why are there flows of immigration,” said Carol Barton, executive director of community action at United Methodist Women.

Barton said a number of U.S. foreign policies have been directly responsible for the migration of people and displacement from their communities of origin.

Yet, Colin Rajah, coordinator for the Migrant Rights Programme for NNIRR, said the U.S. is not alone. There are global trends towards the criminalisation and exploitation of immigrants, he said.

“There’s more and more cooperation between the governments, especially when policing the borders,” said Rajah.

One clear example of the cooperation between Mexico and the U.S. with the Plan Merida to control drug trafficking in the southern border region with U.S funding, he said. He also cited the situation of countries like Libya and Italy, which currently has an agreement with the former for it to patrol its own borders.

“The global north, especially the U.S. and Western Europe, are using their economic and political power so they can get countries in the global south to police their borders and supply the migrant labour,” he added.

Rajah emphasised that grassroots groups in the U.S. need to be part of the international debate because much of it is shaping the way the country discusses immigration such as ideas as “managed migration”.

The term refers to immigration considered in the context of economic development for the receiving country and goes in line with the idea of temporary guest worker programmes, he said.

“Money can move in seconds just anywhere in the world, while people cannot,” said Liepollo Pheko from the Trades Collective based in Johannesburg, who spoke about the negative impacts of trade agreements on African countries.