LUANDA, Jun 18 2010 (IPS) - She may have been little-known in political circles until now, but by putting herself forward as the first female independent presidential candidate, Luisete Macedo Araújo (50) has thrust herself into the limelight. 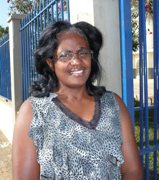 Araújo is the first Angolan woman to set her sights on the country’s top job, held for the last 30 years by the same man, Jose Eduardo dos Santos.

While the ruling Popular Movement for the Liberation of Angola (MPLA) has more than 70 women among its 191 members of parliament, and several female ministers in government, there are few high profile women in opposition.

The second biggest party the National Union for the Total Independence of Angola (UNITA) has 16 seats in the National Assembly, of which four are held by women. The remaining three opposition parties, sharing 12 seats between them, have no women in parliament.

According to Araújo, there are fewer women in opposition because the salaries are not as generous as those paid by the ruling party.

“A lot of women will say they have a family to support so they don’t want to take a risk,” explained Araújo, who is married but has no children, “But I definitely think that we need more women in the opposition parties because it would bring a new climate, a new energy.”

Suzana Mendes, editor of Luanda-based weekly newspaper Angolense and member of the Forum of Women Journalists, welcomed Araújo’s entry into politics following the death in 2009 of Anália de Victória Pereira of the Liberal Democratic Party, the only female ‘leader’ in opposition.

Portuguese-speaking Angola, which spent almost 30 years fighting a civil war that only ended in 2002, may be rich in oil and diamonds, but it has some of the worst social conditions in the world. The World Bank estimates that two thirds of the country live in poverty and according to UNICEF one in five children die before they reach the age of five.


“We have to recognise that the women of MPLA and UNITA are doing well but of course we always need more (women in politics) because Angola is a country with a lot of difficulties and with a lot of poverty and problems,” Mendes said.

Angolan political analyst Rafael Marques said standing as the only women candidate will draw attention to Araújo but he does not see her as a serious presidential contender.

“She’s one of just a handful of women in opposition so on a personal level she has found a niche which is something,” he explained, “And I think the media will be sympathetic to her cause, but I think that is as far as her campaign will go.”

Araújo is also up against a change in Angola’s constitution which has abolished presidential elections, with the head of state elected from the top of the list of the party winning the most seats in parliament.

In a bid to overcome this obstacle, she has joined forces with Partidos de Oposição Civil (Civil Opposition Parties coalition) or POC as secretary for political affairs and hopes to be their candidate in 2012 when the country’s next legislative ballot is due to take place.

But Marques said he was unsure if the POC would be able to gather enough support to register as an official party because of the legal requirement to collect 10,000 validated signatures.

“We have seen other opposition parties in the past struggle with this,” he explained, “The system is designed to make it hard to have a new party, and I think the POC will also have difficulties and that could impact on Araújo being a candidate.”

Araújo knows she has a hard job ahead of her, especially as Dos Santos’ ruling MPLA won more than 81 percent of the vote in the 2008 legislative election.

But she says she is spurred on by the country’s level of poverty and deprivation which was the force behind her decision to enter into politics and the public eye after a quiet lifetime of teaching.

Although government is investing heavily in health and education, service delivery remains erratic; there are still high levels of illiteracy – especially among women; and there are regular outbreaks of preventable diseases such as cholera.

“I want to be president of Angola because I want change,” Araújo told IPS.

“We have so much wealth through oil,” she said, “Yet there is also so much misery and suffering. There is a lot of work to be done to improve conditions for people here.”

Despite the large presence of women in parliament, the mass membership of the women’s wing of the MPLA, Organisation of Angolan Women (OMA) and the work of the ministry of women and family, Araújo does not believe enough is being done to help women.

She said: “This government is not interested in families otherwise they wouldn’t be leaving people living in such bad conditions.” She called for more concrete women-friendly policies such as welfare subsidies for single mothers and victims of domestic violence.

Balbina Martins da Silva, from the campaign group Platform of Women in Action, said Araújo’s presence in politics was an important marker for gender development.

“It’s a valid, positive and necessary step to have a female presidential candidate.”

Araújo believes the country requires more than that – a new president. “The situation right now is suffocating. To have one man in power for 30 years, it’s a very long time,” she said. “We need someone new, someone with new vision who can think differently for Angola.”