TORONTO, Jun 28 2010 (IPS) - Nearly 600 people were arrested as global leaders and elites met behind a fortified perimetre during the G8 and G20 Summits in Huntsville and Toronto this weekend. 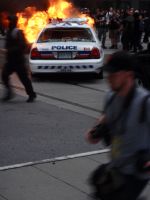 The tension was palpable on the subway as the Toronto Transit Commission (TTC) announced that under a “police directive” all routes in and out of the downtown core would be suspended midday Saturday.

Several blocks north of the protests that were the assumed cause of the transit shutdown, IPS observed a police officer conducting random searches of pedestrians. Asked why he was doing so, the officer, who refused to identify himself, replied, “Do you want to be responsible for a terrorist attack?”

The officer stated that the transit system was shut down due to a “terrorist threat” posed by anarchists, that a cache of Molotov cocktails had been discovered, and that the crude weapons were “all over the city”.

A spokesperson for the G8/G20 Integrated Security Unit later contradicted the police officer, stating in a phone interview, “There’s no terrorist threat.” The spokesperson would not clarify the reasons for the transit closure saying only that it was due to a “security precaution” and that it was “just part of the [security] process”.

The stealthy side of this process revealed itself on Thursday, when police arrested an individual under the ‘Public Works Act’, a provision passed in secret by Ontario cabinet officials earlier this month that allowed police to question, search and potentially detain anyone within five metres of the G20 security fence.

In the weeks months leading up to the summit, protesters were under surveillance by the Canadian Security and Intelligence Service (CSIS). One of those protesters targeted by CSIS, Stefan Christoff, called this part of a broader “chill effect” and “culture of fear” that the security forces were allegedly seeking to foster in advance of the largest, most expensive, and most heavily secured meeting of global leaders in history.

The Canadian Civil Liberties Association, some of whose members were swept up in the arrests, decried police tactics, and expressed concern about the conditions of those being detained. “It would appear that the presumption of innocence has been suspended during the G20,” they said in a statement.

On Saturday, following a peaceful march of between 10,000 and 25,000 demonstrators, hundreds of Black bloc protesters wove their way through the streets, breaking windows of banks and other symbols of corporate power, torched police cars that police abandoned, and chanted anti-establishment slogans.

Decried as “thugs that prompted violence” by a spokesperson for Canadian Prime Minister Stephen Harper, the organisation No One is Illegal defended the protesters, stating that they were symbolically targeting global capitalism, and were merely “engaging in corporate property destruction”.

While security forces did not step in to stop the bloc protesters, late on Saturday night, approximately 150 peaceful protesters were placed in detention after staging a sit-in.

On Sunday morning, supporters of the hundreds detained at a makeshift detention facility on Toronto’s eastside rallied for their release. They were met with tear gas, rubber bullets, and more arrests. At the time of press, upwards of 600 mostly peaceful protesters had been detained, including several journalists.

A ‘Movement Defence Committee’ has called on supporters to ‘Free the Toronto 500’, and to “mobilise a show of political strength and solidarity for the nearly 500 people arrested in the last four days”.

The final communiques of the G8 and G20 did little to assuage the central grievances that were expressed before the events during the ‘People’s Summit’ held by activists Jun. 18-20, or in the many peaceful demonstrations held prior to and during the summits.

The major issues being protested – lack of commitment regarding climate change and clean energy, the mounting concerns regarding the development of the Albertan tar sands, ongoing wars and foreign occupations in Afghanistan and Iraq, and the imposition of fiscal austerity measures on member states despite continuing fallout from the global economic crisis which began in 2008 – were not resolved.

And perhaps the core concern – that a select, if somewhat broadened, group of elites are making decisions that concern all peoples around the globe largely in secret – appeared to be flaunted by members of the corporate elite, dubbed the ‘B20’ (Business 20), who were on hand.

During the summit, several dozen of the globe’s most powerful CEOs were given exclusive, off-the-record meetings with the G20’s finance ministers and Prime Minister Harper.

In concert with the eventual announcement by the G20 that they would seek to halve deficits by 2013 (with the exception of Japan), one business leader projected, “Stimulus is winding down and the private sector is going to have to come in and pick up the slack.”

Canadian Finance Minister Jim Flaherty praised the corporate leaders, saying “The advice we get from you is invaluable in terms of our deliberations and the deliberations of our leaders.”

Offering an indication of the B20’s influence, South Korean Finance Minister Jeung-Hyun Yoon told Toronto’s Globe and Mail, “I sincerely hope the business summit can serve as a platform for public-private collaboration and the starting point of the new normal in the global economic architecture.”

As the effects of the latest policy pronouncements begin to be felt, many fear that Toronto will become known as the staging ground for the security model that will be deployed to protect this new architecture.