KATHMANDU, Jun 20 2010 (IPS) - To women who have lost their husbands to the killer AIDS disease, learning a skill to earn a living could be a matter of life and death. 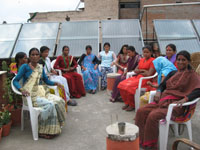 As women trying to ensure their families’ survival, nothing seems to separate them from any other woman in this tiny South Asian country – except that they are all HIV positive.

“For a select few, the training in fact means everything, as they not only have the responsibility of looking after themselves but also their infected children,” says Prakash Yogi, programme officer of the National Association of People Living with HIV/AIDS in Nepal (NAP+N), which, along with the Danish Embassy, supported the training organised by Nava Kiran Plus, a non- governmental organisation (NGO) working for HIV and AIDS victims.

Almost all of the 14 women were wives of seasonal migrant workers, who, along with their spouses, make up over 45 percent of the estimated 70,000 living with HIV and AIDS in Nepal, based on data from the National Centre for AIDS and STD Control (NCASC) under the Ministry of Health and Population reveals.

According to the NCASC as of mid-March, the ‘tested and confirmed’ cases of people with HIV and AIDS in the country stood at 15,460.

Driven by poverty, young men – especially from the mid-west and far-west regions – cross the borders to India in search of seasonal work. These men end up having unprotected sex in Indian brothels, get infected, and once back, transmit the virus to their wives.

“Preliminary estimates show that HIV/AIDS has taken the form of a generalised epidemic in the mid west and far west, with about 2 to 3 percent of the (regions’) population infected,” says Dr Krishna Kumar Rai, director of the NCASC. He adds that the overall percentage of infected population in Nepal is 0.5 percent.

Does that imply that the country is losing its fight against HIV/AIDS?

“Not really,” says Rajiv Kafle, who is the country’s face in its fight against this incurable disease. He was also the first person in Nepal to declare his status publicly.

“There are two parts to our fight against HIV/AIDS: Treatment and testing. While we have done fantastically well on the treatment front, testing has not been effective,” says Kafle, who also heads the NAP+N.

“Because nearly 3,600-3,700 HIV/AIDS victims out of the over 15,000 infected are having anti-retroviral treatment (ART), we can confidently say that access to treatment has been great,” he says.

This means around 24 percent of these individuals are receiving ART treatment – much higher than the “universal access target” of 12 percent for those who have tested positive for HIV, he says.

Still, NCASC’s Dr Rai concurs with Kafle that testing has not been able to make much headway.

Both Dr Rai and Kafle agree that the unidentified infected cases are exactly the reason why Nepal will not be able to meet the Millennium Development Goal (MDG) of halting and reversing the spread of HIV and AIDS by 2015.

The MDGs are eight time-bound goals seeking to address poverty and its different dimensions, which all United Nations member states must achieve by 2015.

“They [unidentified cases] are hidden, vulnerable larger percentage for spreading HIV infection in the community through possible risk behaviours,” says a 2010 report on Nepal’s progress vis-à-vis MDGs prepared by the National Planning Commission.

But identifying the infected, especially intravenous drug users (IDUs) and commercial sex workers (CSWs) who make up a significant chunk of those infected with HIV and AIDS, is easier said than done since they fear exposing themselves to the public and thus risk getting caught.

Dr Rai says: “While MSM (men having sex with men) have started coming out in the open as the Supreme Court has given them legal status, IDUs and CSWs prefer to stay in hiding.”

The country’s apex court recently recognised Lesbians, Gays, Bisexuals, Transgenders and Intersexes (LGBTIs) as natural persons. The court has directed the government to recognise their right to life according to their sexual orientation and introduce or amend laws to ensure equal rights to LGBTIs.

“The HIV/AIDS movement has grown overwhelmingly in the country, but there is a lack of a central command,” rues Kafle. “The government has to take the lead.”

While Dr Rai agrees that the government has to take the lead, he says agencies and organisations outside the public sector have a key role to play in combating the dreaded disease, “since they manage the lion’s share of the fund that is used to fight HIV/AIDS.”

“In the absence of a central command, certain things get overlooked. For example, there are certain districts where many INGOs/NGOs have focused their attention while many other districts where HIV/AIDS-related programmes are equally essential have been overlooked,” states the report.

Aside from addressing this gap, Kafle maintains that the government must also allocate 3,000 Nepalese rupees (40 U.S. dollars) per month to about 3,000 HIV positive widows and some 1,000 infected and affected children in the upcoming national budget to be announced next month.

This proposed financial assistance would certainly complement efforts like the recent skills training offered to 14 HIV positive women in Nepal.