DETROIT, Jun 27 2010 (IPS) - The 2010 U.S. Social Forum ended Saturday in Detroit, a city viewed by many as a metaphor for the excesses of U.S. capitalism, with strong parting words from Pablo Solon, Bolivia’s permanent representative to the United Nations. 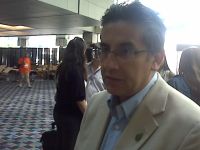 Bolivian ambassador Pablo Solon said the great challenge of this century is to build a new environmental and social contract. Credit: Bankole Thompson/IPS

On Saturday evening, to the thunderous applause of the thousands of civil society delegates who attended the weeklong forum in ‘Motor City’, Solon called on activists to lobby the United Nations for an international tribunal empowered to prosecute those endangering what he repeatedly referred to as “mother earth’s rights”.

Solon said the British Petroleum oil spill in the Gulf of Mexico, which is wrecking livelihoods and ocean and shore ecosystems alike, is a perfect example of the kind of issue that should be brought before an international court designed to address such environmental cases.

“There has to be justice. This is something we cannot accept,” Solon said. “The message is we need to build an environmental court of justice when it comes to nature and mother earth.”

The Bolivian diplomat said the great challenge of this century is to “build a new environmental and social contract”, dismissing the vision promoted by Group of Eight (G8) wealthy industrialised nations – also meeting this weekend in Canada, along with the slightly larger G20 bloc – of a “green economy”.

“What do they mean by a green economy? That means we have to bring capitalism to nature. They want a price placed on nature,” Solon said. “We are in the middle of a new offensive and it’s going to be the Washington consensus – privatisation and commodification of water. We have to find a new alternative.”

He added that his nation is urging the U.N. to declare that access to adequate water and sanitation is a human right.

Solon reiterated Bolivian President Evo Morales’s commitment to the environment, which he said was the idea behind the World People’s Summit on Climate Change and Rights of Mother Earth held in Tiquipaya in April.

“In order to guarantee human rights, we have to defend mother earth’s rights,” he said.

Solon also railed against the U.N. Security Council and its five permanent members, which he called “anti-democratic” because they were not elected by the General Assembly.

Critics of the Security Council have long labeled that most powerful body in the U.N. as an example of “Western hegemony and control”, questioning why regions like Latin America and Africa cannot have a permanent seat instead of a rotating membership.

“You can’t have a small group of nations think they are going to decide for the rest,” Solon said, referring to the U.S., Britain, China, Russia and France.

The ambassador’s remarks were reflective of the fiery issues with tremendous national and international implications tabled at this year’s forum, where activists tried to connect the dots between what is happening locally and on the global scene.

Vanessa Nisperos from New York said she got what she hoped for at the forum.

“I met a lot of people who are like me – street fighters – who are committed to make a change,” Nisperos said.

She said one of the sessions on transformative organising models made her reconsider her approach to social justice issues.

“Sometimes people involved in social justice causes don’t necessarily treat people who work for them with respect. That session helped me understand how to sit back and think about how we deal with each other with respect and also take a break,” Nisperos said.

She is going home to New York with a lot of connections and a “renewed passion for things that I’m committed to”.

Maureen Taylor, head of the Michigan Welfare Rights Organisation and chair of the U.S. Social Forum organising committee in Detroit, described the gathering as a success and economic boost for the city, which has shed thousands of jobs in its lifeblood auto industry over the last few years.

“We secured 3,000 hotel rooms in downtown Detroit, except for the MGM Grand Hotel who wouldn’t work with us,” Taylor said. “It was good to come to Detroit. We are validated. We’ve got love, commitment and anger.”

Taylor said the recommendations that arose from the 20,000- plus attendees will all be codified into a report that will be issued in the next three or four months.

“Many issues, local and national, were identified in the different plenary sessions,” Taylor said. “But certainly the clarion call on what to do next will be released soon.”

Taylor also said one focus of the forum was unity of purpose, which she said was on display at the tents set up by activists.

“In the tents we have some Detroit Muslims sharing candles and prayer rugs with the Quakers,” Taylor said. “That is what the social forum is about.”

She said that kind of camaraderie is needed to fight the bigger and sometimes seemingly overwhelming issues they are facing as activists.

Mary Kramer, an organiser for the forum, said Detroit will be remembered as a gathering that birthed new ideas and reaffirmed people’s commitment to real change.

“We talked about a world court for abuses against women. You could see the enthusiasm amongst the people and for it to be in Detroit was big. We truly see another world is possible,” Kramer said.