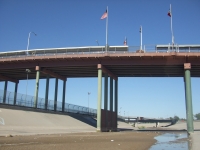 From Paso del Norte bridge between El Paso and Juárez, a passerby filmed the murder of Sergio Hernández under the Puente Negro bridge, in background. Credit: Daniela Pastrana/IPS

The message was spray-painted by a few dozen youngsters who gathered in this spot on the border on Jun. 12. Five days earlier, on Jun. 7, a U.S. border patrol officer had opened fire from the El Paso side of the border on a 15-year-old Mexican boy, Sergio Hernández, who was with a group of boys throwing stones under the bridge across the nearly dry riverbed of the Rio Grande.

The fatal shooting, caught on a cell-phone camera by someone who was walking across the nearby Paso del Norte or Santa Fe bridge, has galvanised public opinion in Juárez, a city devastated by drug-related violence and nearly two decades of unsolved murders of hundreds of poor young women, as well as a severe recession.

“There is a huge sense of outrage, not only because he was just a boy, but because of the cruelty and the excessive use of force,” Rodolfo Rubio, a researcher at the Colegio de la Frontera Norte, a college in northern Mexico that specialises in migration issues, told IPS.

The history of Ciudad Juárez is indelibly marked by its location on the border between Mexico and the U.S. When Texas was annexed in 1845, the original city, El Paso del Norte, was divided by the Rio Grande, known in Mexico as the Rio Bravo, which today has a double chain link fence running along it on the U.S. side.

Three decades ago, at the spot where the graffiti calling for justice for Sergio can be seen, people from Ciudad Juárez would often cross the river several times a day on inner tubes, to visit their relatives in El Paso.

Studies show that 75 percent of the people of El Paso are Hispanic. Rubio said the border in Juárez-El Paso is more porous than in any other border city.

But relations between the two cities changed “substantially” as a result of the tighter security adopted on the U.S. side after the Sept. 11, 2001 terror attacks on New York and Washington, the expert on migration issues said.

“Relations, both social and commercial, are divided now,” he said.

César Fuentes, an expert on binational development, said one of the “first negative impacts” of that policy was the increased time it takes to cross the border, which means people “go to El Paso less frequently and stay longer when they do.”

The rampant violence on the Mexican side of the border has also given an unexpected boost to the economy in El Paso. The El Paso Hispanic Chamber of Commerce (EPHCC) reports that more than 200 Mexican companies opened their doors in that city in 2009, a 40 percent increase over the previous year.

“The services sector, especially restaurants, has grown. And so has real estate,” Fuentes said.

The contrast between the two sides of the border is stark.

As many as 800 women in Juárez, many of them workers from the maquila export assembly plants, have been raped, tortured and murdered since 1993. And the wave of violence triggered by the federal government’s all-out offensive against drug trafficking cartels has left 5,400 people dead in the last three years.

Meanwhile, El Paso, a city of 700,000, is ranked as the second safest large city in the U.S. after Honolulu, the capital of Hawaii.

In the first six months of this year, more than 1,800 people were murdered in Juárez, compared to just one in El Paso.

The already high poverty level in Ciudad Juárez, which has a population of 1.7 million, is growing fast as the maquila plants, which pay low wages and import materials and equipment duty-free for assembly or manufacturing for re-export, pull out. In just two years, 2008 and 2009, 300,000 jobs were lost.

Despite the recession that broke out in 2008 in the United States, economic growth has remained steady in El Paso, according to the U.S. Census Bureau.

Besides the immigration from Juárez, another factor fuelling the economy was the multi-billion dollar expansion of Fort Bliss, just outside El Paso, which is now the second largest military installation in the country and one of the main deployment centres for troops bound for Iraq and Afghanistan.

The river between the two cities is increasingly a divide between rich and poor: those who can afford it flee to El Paso, and those who can’t either stay in the sprawling, ramshackle Juárez or return to their home cities and states.

It was against that backdrop that Sergio Hernández was hit by a bullet to his head and bled to death next to a column under the Puente Negro bridge on the Mexican side of the practically dry riverbed, less than 20 metres from the border patrol officer who opened fire.

The officer’s name has not been revealed.

The increasingly hostile attitude towards immigrants is felt all along the border between the two countries.

On May 31, Anastasio Hernández, a Mexican construction worker, died three days after he was declared brain dead following a beating with a baton and tasering by U.S. border patrol agents at the San Ysidro border crossing between San Diego, California and Tijuana in Mexico.

Hernández, 42, was about to be deported to Mexico after nearly three decades living in San Diego. He and his wife of 21 years had five children born in the U.S.

Another grainy amateur video, which captured his groans and shouts for help while he was being beaten, shocked Mexican society, which is demanding that the government of conservative President Felipe Calderón take a more vigorous stance towards Washington.

“There is a pattern of abuses of immigrants by U.S. authorities, which have surged in the years since September 2001, and are getting even worse now, since the Arizona law was passed,” Rubio said.

The controversial SB (Senate Bill) 1070, signed into law on Apr. 23 in the state of Arizona, makes it a crime to be in the state illegally and allows state police to question and arrest people without a warrant if there is “reasonable suspicion” about their immigration status.

On Jun. 12, a group of around 30 youngsters from Juárez spray-painted graffiti on the Puente Negro bridge, sang songs and lit candles to protest Sergio Hernández’s death.

“Some chavos (guys) jumped over to the US side, there was a border patrol there and they yelled at them,” said Alma, a young woman with the Zyrko Nómada de Kombate street artist collective, who took part in the demonstration.

“Then the feds (Mexican police) came, they stayed up there and said they were going to protect us, but told us not to throw stones,” she told IPS.

The day of the demonstration, the bloodstain was still on the concrete where Sergio died.