Q&A: ‘True African Leaders Have Nothing to Fear From ICC’

KAMPALA, Jun 10 2010 (IPS) - As the first Review Conference of the Rome Statute that established the International Criminal Court takes stock of the ICC’s achievements and considers amendments to strengthen the pursuit of justice around the world, the first African woman to win the Nobel Peace Prize is one of its strongest defenders. 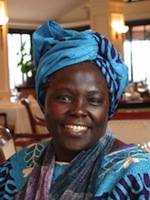 Wangari Maathai is internationally recognised for her persistent struggle for democracy, human rights and environmental conservation.

The founder of The Green Belt Movement, which works to curtail the devastating effects of deforestation and desertification, spoke to IPS in Kampala, Uganda, calling the ICC the only hope for many who have been denied justice in Africa and around the world.

Q: Why are you participating in this ICC landmark conference? A: I came to express my support for the ICC, especially in light of the statements that have been made that the ICC is not good for Africa and should not be supported by Africans because it is targeting this continent.

I know that the majority of ordinary Africans support the ICC because they are victims of conflict. Those who may not support the ICC are the leaders who are the perpetrators of violence against humanity.

Secondly, in these conflicts, women have been used and punished. They are the ones displaced to refugee camps and who lose their husbands and children.

But by far, the greatest crime against them is that rape is used as a weapon of war. We want rape to be punishable and those who commit this kind of crime held accountable.

Q: Why is the ICC being accused of focusing and targeting only Africa? A: That’s an excuse for Africa. The mandate of the ICC is to target people who commit crimes against humanity and to come in where national mechanisms fail to punish perpetrators.

In Kenya, we failed to handle the situation; Sudan was referred by the Security Council for crimes in Darfur. Uganda, DR Congo and Sierra Leone invited the ICC because they could not do anything at the national level.

It is not that Africa is being targeted. Perhaps, this is a reflection that there are a lot of conflicts and gross violations of human rights in Africa and African countries are not able to deal with them at the national level.

What Africa needs to do is learn to deal with these issues honestly and fairly. True African leaders have nothing to fear from the ICC.

Q: What are your views on the ICC’s involvement in Kenya? A: The ICC came to Kenya because Kenyans failed to create a tribunal that can punish the perpetrators. It is true that the ICC will only be able to punish the few; the most responsible.

But there will be thousands who were involved in killing, robbing and displacement of people that will have to be tried by some form of tribunal in Kenya. So in some ways we are complementing and in others, cooperating with the ICC.

Q: The ICC has often been criticized as being a ‘toothless dog’ and some victims say it has let them down? A: It’s very important to educate our people in Africa that the ICC is not a panacea and it will not solve all our problems. The ICC is a great idea and it has succeeded in creating a bridge that was non-existent; a bridge that allows it to enter into a country and arrest citizens without interference from national governments. That’s a bridge that should give hope to victims of war.

Let us not imagine that it is an easy thing. But let us nurture the hope that the ICC brings because it is the only hope we have at the moment. When we arrest a few, those potential ones who would have wanted a war tomorrow will think twice.

Q: You hold the view that the ICC is strengthening national justice systems. What evidence is there to show that this is true? A: Kenya is a very good example. We will now have to domesticate some aspects of the ICC in order to punish the many thousands of people who committed crimes during the post election violence. That in many ways is helping us to improve our own system of justice.

By domesticating the Rome Statute, you raise the bar on what is tolerable even at the national level.

Q: Women want more visibility and representation in peace processes. Is there evidence to show that a greater voice for women in negotiating peace agreements can yield better results? A: From the women who were in the government – who were in the front line, either ministers or potential ministers, who should have come together to protect and save us from the [Kenya post election violence] catastrophe that we were facing – I did not see that. And therefore, I continue saying that given the power, women must demonstrate that they can manage it better than men.

Q: What is the link between conflict, women and the environment? A: When men fight for power, they are usually fighting to control resources. It’s very important for us to manage our resources in a responsible and accountable way.

If we don’t, there will be fewer resources and this will increase the possibility of conflict, especially as the population grows.

And whenever there is conflict, women will always be the major victims.