Risking Life and Limb for Football in Somalia

MOGADISHU, Jun 15 2010 (IPS) - “Some people think football is a matter of life and death. I assure you, it’s much more serious than that,” former Liverpool manager Bill Shankly once said. Uncomfortably close to a bald statement of fact for fans of the beautiful game in Somalia, who risk their lives to watch the World Cup unfolding in South Africa. 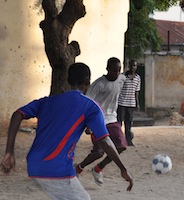 Threats from Islamist groups have not quenched the passion for football in Somalia. Credit: Abdurrahman Warsameh/IPS

In the final weeks before the tournament kicked off on Jun. 11, demand for satellite dishes was high. But the Islamist groups that control much of the country have declared the World Cup un-Islamic, threatening dire consequences for anyone found watching.

“We are warning all the youth of Somalia not to dare watch these World Cup matches. It is a waste of money and time and they will not benefit anything or get any experience by watching mad men jumping up and down,” Sheikh Mohamed Abdi Aros, a spokesperson for Hizbul-Islam, told the BBC.

Fans lucky enough to live in territory controlled by the Transitional Federal Government are able to watch in relative security – the Dhamuke Cinema is a popular public viewing place.

But two people watching the game in a private home in another part of the capital Mogadishu were reported to have been killed by militants Jun. 12. Other reports from north-east of Mogadishu say Hizbul-Islam arrested 10 people who were watching Nigeria play Argentina.

But Somalia is a football-mad nation. Despite almost twenty years of civil strife in Somalia, football continues to be not only watched, but played and enjoyed in the east African country.

Daily clashes between the warring sides are the norm for Mogadishu, but it is not unusual to find young footballers playing in deserted neighborhoods while fighting is goes on in other parts of the city.

Games organised by the Somali Football Federation (SSF) between local football clubs are watched by fanatic supporters in spite of the prevailing insecurity in the capital.

“Nothing will stop us from playing football which is loved by many people in this country,” Shafii Mohyadeen, SFF spokesman told IPS.

The city’s stadia are either too dilapidated to play in, or occupied by forces from the feuding sides. Tournaments are held in temporary playing grounds in relatively safe areas in Mogadishu.

“I believe the game has a future in Somalia just as in any other country,” Mohyadeen said.”Every time we have a game, thousands of fans pack the playing grounds to watch.”

The country’s U-17 squad qualified for the next round of the African youth championships after beating the Kenyan team in mid-April. Somalia secured a 0-0 draw in a hotly-contested match at the Oserian stadium outside Nairobi, after humiliating their Kenyan counterparts 3-1 in the first leg earlier in the month.

“That victory was a boost to our national morale, and as supporters we see what our team can do if they play to the best of their ability,” said an ecstatic Mohamed Yare, a fan from Mogadishu. “We hope in time Somalia could qualify for a continental or regional championships or even the World Cup.”

Somalis in the diaspora have preserved this passion for the game. Dozens of Somali football clubs in Western Europe and North America play in tournaments both within the Somali exile community and in their host countries.

Players like Cisse Aadan Abshir, the Ocean Stars’ all-time leading scorer who plays for Norwegian side Eidsvold Turn, Ayub Daud, on loan at Italian third division club Lumezzane but registered to Italian giants Juventus, and Liban Abdi, of Hungarian club Ferencváros, are among the Somali exiles who are playing in professional leagues.

Many of the players in the national team are drawn from overseas, others come from prominent Mogadishu clubs like Banaadir and the reigning league champions, FC Elman.

Football is one of the fragile instruments used to promote peace in Somalia. A number of former child soldiers have been persuaded to swap their guns for football.

“However difficult our situation is, we believe football can play a major role in helping peace and stability prevail in our country,” insistes the SSF’s Mohyadeen, “and that is what our federation has long been striving to attain. Football is here to stay, not only as game to be played but as a catalyst for peace and harmony among society.”