SRI LANKA: A Former Woman Combatant Struggles to Pick Up the Pieces

BATTICALOA, Sri Lanka, Jun 30 2010 (IPS) - As a young woman, Ranjani (not her real name), a 32-year-old Tamil from Sri Lanka’s eastern Batticaloa district, only had bright hopes for tomorrow. 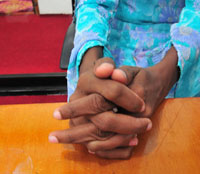 Forced to join the Tamil Tigers to protect her family, Ranjani, 32, yearns for better days ahead. Credit: IPS Correspondents/IPS

Then her dreams were dashed in an instant. In 1990 a group of secessionist Tamil fighters came knocking on their door, looking for additional warm bodies to beef up their forces.

The Liberation Tigers of Tamil Eelam (LTTE), or Tigers, as the combatants were also known, was then fighting a bloody protracted war against the government for a separate state for the minority Tamils. And they wanted one member from each family in areas they controlled to join their ranks.

If Ranjani did not go with them, they would take someone else, most likely her brother, 10 years her junior, she thought to herself.

Born to a poor family, Ranjani, being the eldest daughter, was forced to make a choice between pursuing her dream of obtaining a university education and protecting her family by joining the LTTE.

“I had to take that decision – there was no choice, I had to go,” she says with a barely audible voice of her painful choice.

Fighting a war she never wanted to be a part of, Ranjani abandoned all thoughts of her family, friends, and even herself.

On joining the Tigers, her shoulder-length hair was crudely cropped short. For the next eight years, while she was a cadre, she never allowed her hair to grow less than a quarter of an inch, never used a comb or checked her look in the mirror.

If she had any illusions of saving her family from danger by joining the Tigers, they ended when her father was killed and her brother injured in the leg when their house was hit by shellfire. Her brother, who now walks with a limp, is incapacitated for work due to the lingering pain in his leg, says Ranjani.

The death of her father and her brother’s injury forced her to flee the LTTE. She returned to her family, vowing to take care of them. Her leaders in the LTTE pursued her relentlessly, but they never found her.

By mid-2007, the Tigers were forced out of the eastern part of Sri Lanka by government forces. Two years later, in May 2009, the LTTE was completely wiped out by military troops.

Today Ranjani is trying to put whatever is left of her life back together. “We have lost everything. I lost my youth, my father and my future,” she says, tears welling up in her eyes as she wipes them with her handkerchief. Her narrative is interspersed with long silences, staring aimlessly into space, her hand twitching and clutching the blue cloth. Her voice cracks each time she speaks.

Although peace has descended on Sri Lanka’s war-torn northern region, life for her family is a constant struggle for survival, with barely enough to tide them over to the next meal.

“We make string hoppers (a Sri Lankan variety of rice cakes) to sell to the neighbours. We also sell meat and eggs from the chickens at home,” she says. On a good day, the family makes 200 to 300 Sri Lankan rupees (1.50 to 2.75 U.S. dollars), and none whatsoever on bad days.

She says she cannot leave the house to look for a job, because she needs to look after her brother and aging mother.

Ranjani consoles herself with the thought that her younger sister has been able to secure a job at a regional university. “I feel she is grateful for the sacrifice I made,” she says with a faint smile on her face.

At the moment, she has no lofty plans. Her main concern is to provide for her family’s daily needs and save what little she could in the hope of setting up a small boutique at home.

Marriage is not an option. “I don’t even want to think about marriage,” she says. Even if she does, the prospects of finding someone will likely be nil. Villagers shun her completely while others keep their distance from her. “My past precedes me,” she says, adding that many like her are faced with the same predicament.

Yet the future does not look entirely bleak to her.

On Jun. 13, during a mass wedding for former LTTE cadres in the northern town of Vavuniya, the government announced that over 8,000 former Tigers were housed at rehabilitation centres while over 3,000 had been sent back home. A few had jobs.

Such an announcement gave her another reason to hope – that getting a steady income was not so farfetched after all. The small mercies that come her way every day give her one more reason to hope.

“It is different now – we can live together,” she says of Sri Lanka’s war- ravaged communities.

As she speaks, her eyes dart toward the horizon as though signalling her resolve to move on from the ravages of war and all the pains that it has inflicted on her and her family.

“I will never hold a gun again. I will never do that again,” she says, her voice trailing off into a whisper while tears begin to flow from her eyes, her hand clutching her blue handkerchief tight.