KAMPALA , Jun 28 2010 (IPS) - Thirteen-year-old Jacinta Okello and her fellow primary school classmates call it “doing bad manners”. But when you ask her what she knows about sex, she breaks into a shy smile, looks to her feet and giggles. 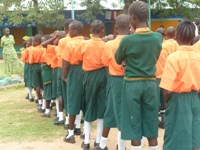 At 13, Okello should actually be in secondary school but she, just like thousands of other pupils in the system across the country, was a late starter.

And as Okello and other late entrants become young adolescents while in primary school they cannot access teenage sex education because they fall out of the ‘age-appropriate’ bracket set by the ministry of education and sports national guidelines on HIV/AIDS.

It is a policy that does not meet the sexual and reproductive health needs of the next generation and exposes them to health risks, critics say. Rights activists are now calling for policy changes that will allow adolescents still in primary school to be taught sex education.

Henry Ntale, Behaviour Change Communication and Advocacy Manager of the Naguru Teenage Information and Health Centre is one such activist. From the number of young adolescents visiting the health centre daily, there is a need to disseminate the relevant information based on age – not education – levels, Ntale says.

The teenage centre is open to young people aged between 10 to 24 years. Approximately 85 adolescents visit for medical checks and 40 for HIV testing on a daily basis. Of these, 60 percent are in school.

Uganda has one of the highest teenage pregnancy rates in Africa at 25 percent with many primary school-going teenage girls leaving school because of this. Dropout rates for girls from the primary school system are as high as 50 percent, according to a 2006 report, ‘Unintended Pregnancy and Induced Abortion in Uganda: Causes and Consequences’ by the Guttmacher Institute.

“You don’t give the same messages to infants as you do those in upper primary. We make the younger children appreciate certain values in society like sharing. But as you get higher up the education chain, you start dealing with complex issues of dealing with stigma and discrimination, of compassion of those infected and affected by HIV/AIDS,” says ministry of education and sports spokesman Aggrey Kibenge.

Today, it is common to find children as old as 17 sitting in a primary school classroom. According to the Uganda Educational Statistics Abstract (2007), a total of 433,632 new entrants joined primary one at seven years, 78,405 joined at nine and there were 516 12-year-olds in primary one.

But according to Kibenge, these figures are negligible compared to the 7.5 million children currently under the free primary school education system. He says policies cannot be created based on minority demand.

But Ntale says this should be done: “We recommend age-appropriate information regardless of the education level of the child. We rather give them the information and skills to stay safe.”

But Kibenge insists that the education ministry is giving the appropriate sex information to the right group at the right time. This includes teacher training programmes on sex education and the introduction of story books for pupils on several themes to enhance their awareness on matters concerning HIV/AIDS.

“I am confident that we are reaching all schools,” Kibenge says.

For now this means that Okello has to wait till secondary school next year to access appropriate teenage sex education. Her mother, Jovita Okello, says her daughter should know more about the changes in her body than she does now – but Jovita Okello does not know how to educate her daughter about it.

“My daughter started her menses when she was only 12. I did not know how to tell her about the changes in her body. So I just told her she should not let anyone touch her body parts because now, she could get pregnant and also contract HIV,” she tells IPS.

She hopes that the primary school system will provide her teenage daughter with the appropriate sex information in a society where parents consider discussion about sex a taboo.