DETROIT, Jun 24 2010 (IPS) - The committed determination of young people in the environmental justice movement is emerging as a highlight of the 2010 U.S. Social Forum, which opened in Detroit this week with some 20,000 activists meeting in ‘Motor City’ to network and share their visions for social change. 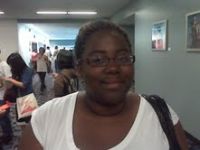 Loreen Dangerfield, 15, is among a group of dedicated young people leading the charge against environmental injustice in San Francisco. Credit: Bankole Thompson/IPS

On Wednesday, a group of youth activists from San Francisco described their ongoing fight against pollution in minority communities and efforts to resist multinational corporations that are using communities of colour as dump sites for toxic waste.

“Pollution Has No Borders: Black, Chinese and Latino Youth Organising for Environmental Justice in San Francisco” was the theme of the workshop that spotlighted the west coast city’s environmental issues as a national concern.

“In the Bayview district where minorities live, they are targeted the most with pollution and many of the people who live there don’t even know it,” said 18-year-old Ingried Seyundo, a youth organiser with People Organising to Demand Environmental and Economic Rights (PODER).

“Big corporations with power plants are polluting minority districts and little kids are getting sick, mostly with cancer, [while other problems include] heart attack and high blood pressure,” Seyundo said.

The situation is evocative of the notorious “cancer alley” in the U.S. South, where an 85-mile stretch of the Mississippi River between Baton Rouge and New Orleans is home to some 140 companies that produce a quarter of the petrochemical products manufactured in the United States. In 1993, a federal commission found that the industry had a disproportionate impact on the area’s minority residents.

Now, five communities in San Francisco – Bayview Hunter’s Point, Portola, Excelsior, Visitation Valley and Mission – are in the eye of another environmental battle, in large part because they are heavily populated with working-class people of colour, activists charge.

“It is important for us to educate ourselves about these environmental issues. You don’t have to be living in an unbearable condition and not raising your voice,” said 18- year-old Tiffany Ng of the Common Roots Programme of the Chinese Progressive Association of San Francisco (CPAS).

After a long fight, Ingried said the community successfully demanded truck routes through their residential neighbourhoods that featured hybrid buses and trucks with less environmental impact, instead of those with diesel fuel.

“We campaigned against trucks running in residential areas,” Ng said. “We created truck routes that now allow these trucks to drive away from places where there are lots of children, like schools, and also where the elderly live.”

Loreen Dangerfield, 15, with People Organised to Win Environmental Rights (POWER), said at issue right now is the building of condominiums on a toxic site by Lennar Corporation, a Florida-based housing redevelopment company. According to the young activists, the site is on the Hunters Point Naval shipyard where the atomic bombs to Hiroshima and Nagasaki were shipped from.

“The shipyard itself is toxic and it’s a landfill,” Dangerfield said. “In Miami, Lennar built houses on top of undetonated bombs and people started getting sick.”

But first the youth organisers are demanding an independent environmental impact report – one they say is not manipulated to suit the interests of the developers but fully addresses the health risks associated with building on toxic sites.

“We don’t want Lennar to build the condominiums. They bought the shipyard – 700 acres – for a dollar,” Dangerfield said.

Lennar has been digging into asbestos-rich serpentine rock, the young people said, sending up plumes of carcinogenic dust near residential areas and schools.

Ingreid said the Bay Area Quality Management District has been under pressure to monitor Lennar. BAAQMD voted to fine the firm for not properly monitoring toxicity levels emerging from its massive construction of the condominiums.

California law requires the redevelopment company to monitor toxins and inform residents when asbestos reaches a dangerous level, but community members were kept in the dark, according to the youth activists.

Teresa Almaguer, youth programme coordinator for PODER, said it was important to share the environmental justice concerns of San Francisco’s poor neighbourhoods with other activists at the U.S. Social Forum.

“What is taking place in San Francisco is happening all over the world. Environmental racism is institutionalised,” Almaguer said. “It’s decisions being made all over by planning departments in cities across the nation. We want to stress the importance of building because we are all equally getting sick.”

Almaguer said working class families are being displaced by gentrification in San Francisco because they would never be able to afford the cost of condominiums in addition to the environmental threats arising from such developments.

“As we are fighting to create safe and healthy neighbourhoods, we are being displaced. This is a global issue,” Almaguer said. “We also want to bring attention to Lennar. We need to struggle and work together because we can accomplish big things.”

Even though not all members of the San Francisco Board of Supervisors are supporting their push, Almaguer said they are holding elected officials accountable by issuing a report card on their environmental stance.

Sandar Sebastian from New York who is attending the weeklong forum in Detroit told IPS she was impressed to observe the energy and knowledge the San Francisco youth showed at the workshop to educate their fellow young people from all around the country.

“I think it is really powerful to find young people who are so engaged with this kind of analysis of environmental justice and linking environmental racism to the impact on their daily lives,” Sebastian said.

She added that their struggle amplifies how “racist policies threaten the daily lives of people in low-income communities”.