ZIMBABWE: A Chance for Women’s Voices to be Heard?

BULAWAYO, Jun 22 2010 (IPS) - As Zimbabwe embarks on writing a new constitution with the countrywide collection of public submissions starting on Jun. 23, not all women are upbeat about the process. 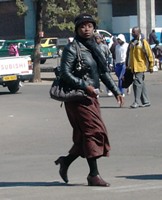 Lydia Thembo is one of many women who have no clue about the writing of a new constitution and how they can contribute. Credit: Ignatius Banda

While some gender activists see this public comment phase as an opportunity for their voices to be heard, ordinary women remain in the dark about the proposed new constitution and what exactly they are supposed to contribute.

Activists warn this could be a lost chance for women to speak about issues that affect them and therefore assert their constitutional rights. It could compromise women’s rights advocacy and the drive to have more women in parliament and other decision-making positions, warns Rejoice Timire of the Disabled Women Support Organisation.

“For women’s issues to come out as they want in the constitution, it needs women at the grassroots to be educated about what is a constitution. If they don’t know what it (the constitution) means then we cannot say our issues will come out as we want them to as Zimbabwean women,” Timire told IPS.

There are already complaints among members of the public that not much has been done to adequately advertise the call for public submissions.

Lydia Thembo agrees saying she has no clue about the constitution-making process that she and other Zimbabweans are expected to provide input for.

“I have not heard anything about it (the constitution outreach exercise),” she told IPS. “There are obviously many things I would like addressed that affects us women, for example, issues to do with inheritance laws. But I have no clue how to do this. I only know about voting during elections – that’s all.”

Local newspapers also reported that the public is unaware of where to make their submissions and that one constitutional outreach team dispatched to collect submissions had been thrown out of their hotel, due to lack of accommodation arrangements.

These concerns are emerging against the backdrop of feminist activists having already complained after the formation of the government of national unity in 2009 that the coalition partners had ignored the call for equal representation in senior government positions. This would have been in line with the Southern African Development Community (SADC) Protocol on Gender and Development, of which Zimbabwe is a signatory.

The protocol demands that women have equal positions to men in both public and private sectors by 2015. Zimbabwe has only four female cabinet ministers of a total 120.

“At the moment women in parliament are too few to make any meaningful change,” Timire said.

Zimbabwe’s next elections are expected after a new constitution has been written and accepted in a referendum. The constitutional outreach process is expected to be completed by September.

But concerns have been raised that this could be another exercise in futility that will serve only as “window dressing.”

“Coming up with a good constitution is one thing, implementing the provisions is quite another thing,” said Slyvia Chirawu, National Coordinator of the Women and Law in Southern Africa (Zimbabwe).

The decades-old economic crisis has left women vulnerable and out of employment, and feminists say this has partly been due to their absence in decision-making positions both in the public and private sector.

“We need other strategies to get women into decision-making positions. Do the political parties themselves have a clear stance on women’s participation in their parties? It determines the number of women who get into parliament,” Chirawu told IPS.

In a gender audit report of political parties that form Zimbabwe’s unity government last year, the Women in Politics Support Unit lamented that despite Zimbabwe being a signatory of the United Nation’s Committee on the Elimination of Discrimination Against Women (CEDAW), the coalition government had, by not ensuring gender parity in government, failed the country’s women.

Yet the fight for political equality remains a tough one in this largely patriarchal nation where women remain stereotyped as “homemakers,” says Abigail Shuma, a gender activist in Bulawayo.

“Women are yet to come out of the closet as leaders in their own right not by mere appointment and that has been the nature of our national politics that women only participate and become very visible only as supporters and so-called party bulwarks. That’s how their role in politics has been defined,” Shuma told IPS.

“There is still a long way to go before ordinary women aspire to higher political office in this country.”

However, Chirawu believes new strategies must be adopted for women’s presence to be felt.

“We need to address issues that hinder women’s effective participation in politics starting from the home upwards,” Chirawu told IPS. She said this included addressing, among other issues: the lack of knowledge on laws and policies; gender inequalities; patriarchy; negative stereotypes; and lack of access to resources.

“The legislated quota system will only work if those who get in through this system have real power, so we look at the motive: is it just window dressing or is it meant to give the women real power as decision makers?” she asked.