JOHANNESBURG, Jul 21 2010 (IPS) - When women from the predominantly rural Vulindela district in KwaZulu-Natal first began participating in an HIV-prevention trial many were unable to negotiate the use of condoms or even discuss safe sex with their partners. But as they used the discreet antiretroviral (ARV) microbicide gel, for the first time women – who bear the brunt of the HIV epidemic in Africa – were in control of an HIV-prevention method. 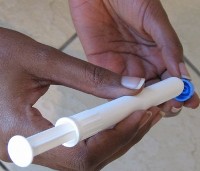 The groundbreaking research, which was first to use the ARV drug tenofovir as a gel, was released by the Centre for AIDS Programme of Research in South Africa (CAPRISA) at the XVIII International AIDS Conference in Vienna, Austria on Jul. 20.

“For me these women are champions for agreeing to use an unknown product. It needs to be investigated further to verify the results but the women are part of the break through,” said Mukelisiwe Mlotshwa, the research nurse and team leader for clinical procedures of the CAPRISA 004 microbicide trial.

The research dealt with the safety and effectiveness of the ARV microbicide gel and 889 randomly selection women considered to be at high risk of HIV infection participated. The study was conducted in the most affected HIV areas of South Africa, both of which are in KwaZulu Natal: Vulindlela, a rural area which has high rates of unemployment and a high migrant population; and Durban, an urban area.

The results showed that 98 women out of 889 became HIV-positive during the trial, with 38 in the tenofovir gel group and 60 in the placebo gel group.

Tenofovir is taken in the pill form as part of the common three-drug cocktail. Tenofovir works by preventing HIV from growing inside the human cells.

With the positive outcome of the research it indicates that tenofovir formulated as a topical gel and used in the female genital tract also has great possibilities for the use in HIV and herpes simplex virus type-2 (HSV-2) prevention.


There were two groups, a placebo-controlled group and one which received the tenofovir gel. Participants visited the clinics monthly and were clinically examined for potential side effects as well as being tested for HIV infection.

The study was also double-blinded, meaning that the researcher as well as the participating women did not know whether they were receiving the tenofovir gel or the placebo gel.

Women were advised to use the gel up to 12 hours before sex and soon after having sex with a maximum of two doses in 24 hours. Those participating used the gel for a minimum of one year and a maximum of two and a half years.

Mlotshwa said the product played an important role in the women’s lives. “Most of these women used to say that ‘this product is so nice and so discreet’, so much so that their partner never knew they were using it at all. They told us that their partner could not feel anything as well.”

Even though the gel is seen as a discreet substance, nearly 70 percent of the women participating in the trial did disclose to their partners that they were using the microbicide gel. Only six percent of the partners reported a dislike for the women to use the gel.

Dr. Janet Frohlich, CAPRISA’s Vulindlela Clinical Research Site Director, explained to IPS that microbicides are a type of a gel substance which women can insert into the vagina or rectum which “we hope to show with this trial can help in the prevention of the spread of HIV.”

The microbicide gel contains one percent tenofovir, a common ARV drug used widely in the treatment of HIV.

If other studies prove the gel to be effective and confirm the results, the use of the gel would become widespread and offer women a higher level of protection, resulting in preventing over half a million new HIV infections in South Africa alone over the next decade estimate researchers.

Frohlich said that the research is a milestone as there are eleven trials with six different kinds of microbicide products, but this is the first trial of its kind to use ARVs. “As we know ARVs can be used in the prevention of HIV, and a gel can help in the prevention of transmission in heterosexual couples,” said Frohlich.

Women have never had the complete power to protect themselves against HIV infection, till now. “Like Ghana was Africa’s hope at the World Cup, this trial is for all of Africa. Women across Africa and globally who are not able to negotiate condom usage can now prevent HIV and herpes transmission on their own. Women now have the control over their health and well being,” explained Frohlich.

“This new technology has the potential to alter the course of the HIV epidemic, especially in southern Africa where young women bear the brunt of this devastating disease,” she said.

When the trial started women were counselled on risk reduction and condom use, and the importance of building relationships with their partners.

“We explained to the women that you cannot negotiate using a condom in bed. It’s too late. It must be done before,” Mlotshwa said.

“At the monthly check ups, you could see the women growing. You can see them becoming empowered and confident in their personal relationships.”

The counselling during CAPRISA 004 trial was so successful that morning health talks started for the women in the area.

“It was nice to see them growing in the study. They are now sharing information on HIV prevention amongst themselves,” Mlotshwa said.

“The study really needs to be confirmed,” insists Frohlich.

Frohlich said VOICE (Vaginal and oral intervention to curb the epidemic) trial, which is part of a set of trials across the globe, will help verify the CAPRISA 004 results. “The VOICE trial is being conducted through the Microbicide Trails Network, which a number of sites are conducting. The trial uses two ARVs; one is tenofovir and the other truvada and compares them to a placebo. CAPRISA is also participating and this will help us judge the study and confirm results.”

The CAPRISA 004 trial is funded by both the United States government as well as the South African government though the department of science and technology.

“Once the trial is confirmed, we will need to licence the product. Once this is done it needs to be made available to women. But as an ARV product, women will need to come to clinics every six months for checkups, like with any other ARV treatments.”