BOGOTÁ, Jul 11 2010 (IPS) - The so-called para-politics, para-institutions and para-economy in Colombia “have their place in the dock” among the accused, said eight former leaders of ultra-right armed paramilitary groups, now demobilised and charged with crimes against humanity in the nation’s decades-long civil war. 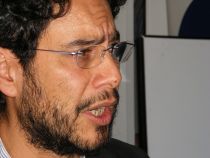 From prison, the eight sent a letter last week to those who were once among their potential military targets: the leaders of the centre-left Alternative Democratic Pole (PDA), Gustavo Petro, former presidential candidate for that party, and Iván Cepeda, congressman-elect and spokesperson for the Movement of Victims of State Crimes (MOVICE).

What prompted the letter was a meeting between Petro and Colombia’s conservative president-elect, the former Defence minister Juan Manuel Santos, who has declared he will set up a “government of national unity.”

Petro proposed joint efforts to resolve the priority problems from the internal war, such as reparations for the victims and returning the land seized from millions of rural people displaced from their homes — which some private studies estimate to be more than 10 percent of the 42 million Colombians.

The ultra-right paramilitary groups reached a pact with President Álvaro Uribe to demobilise and, for a partial confession of their crimes, limiting the maximum prison sentence to eight years, under a legal framework known as the Justice and Peace Law.


But the Constitutional Court ruled that the demobilised paramilitaries could only obtain that legal benefit if they confessed “the complete truth” — and things grew complicated.

Now those former combatants are no longer willing to be the only ones taking the blame. They say they are truly repentant, and want reconciliation, as the law states.

“We are very attentive to and very interested in participating and contributing,” they stated in reference to Petro’s proposal to Santos.

The former paramilitaries wrote that the “real truth” is not yet known about the war they joined more than 25 years ago. Their archenemies, the leftist guerrillas, emerged 46 years ago.

They write that their demobilisation and disarmament, and “the half truth and half justice,” will be “worth nothing” if those who “personify” the paramilitary phenomenon remain invisible in political and economic power, “evading, at any price,” their responsibility.

The armed groups are merely “the shock force,” “the tip of the iceberg,” of the “macro” phenomenon of paramilitarism, they said, noting that as long as the “true scope” remains hidden, “paramilitarism, offspring of consented impunity,” will reproduce.

Below their signatures they put their fingerprints, in the style of the messages from the now-dead Colombian drug kingpin Pablo Escobar (1949-1993).

They agree that peace should be built with justice, truth and reparations, but reject a commitment in which the blame falls solely upon those who carried out the actions.

The incoming Treasury Minister, Juan Camilo Restrepo, notorious critic of the current government of Álvaro Uribe, announced an "agrarian reform" to benefit the displaced Colombians. According to different sources, from four to 10 million hectares were violently taken over in the context of the civil war.

The government has seized some two million hectares from drug trafficking cartels, but distribution to the displaced rural families has been nearly impossible due to the "winding paths of justice," as Restrepo describes it.

This being the case, agrarian reform will have to begin on paper.


“Land speculation, seizure and concentration of agricultural property, violence and displacement in the countryside, and the consequent social injustice against the rural people, entail and involve situations still unknown,” they state.

The men point out that the “small number of two dozen former commanders” of the paramilitary forces cannot be the “shadow owners” of the at least four million hectares “of highest commercial value” today in the hands of the mafia. They add that the land should be returned to the displaced persons.

The former leaders underscore that the people deployed in paramilitarism include “politicians, business leaders, high-level officials, large contractors, foreign investors and members of the public security forces,” who should be brought to justice as well.

The Justice and Peace Law requires adjustments to include those actors, focused on the former combatants, but not to put an end to the paramilitary phenomenon, “which was not on the agenda at the negotiating table” with the Uribe government.

As a senator, in August last year, Petro railed against the concession of military bases to the United States to fight the illicit drug trade. He has been a constant advocate for returning the land to the farmers who were forced to flee by the armed conflict.

“We need justice and for the fertile lands to be returned to the displaced,” said Petro, noting that it would be “a big political challenge for Colombian society.”

“A true anti-drugs policy should take the government and political power away from the mafia,” said the politician, “and to do that we don’t need the U.S. military giving orders to Colombian soldiers.”

Meanwhile, MOVICE is collecting input about a possible reaction to the letter. In any case, lawmaker-elect Cepeda told IPS that the missive includes “very significant statements about the paramilitary phenomenon and the seizure of land.”

“It shows that much of the truth about the paramilitaries in Colombia is not yet known, and that the true leaders of paramilitarism are those who currently exercise political power,” he said.

“What they say is true. They were merely the armed wing of paramilitarism,” said Camilo González, director of the Institute of Studies for Development and Peace (INDEPAZ), said of the eight who signed the letter.

“Here we have a many-headed monster, with the armed, political and economic heads. They are interrelated and each one has a small piece of the other,” he said.

In González’s view, “the demobilisation only dismantled one part of the armed apparatus,” and the “para-state” and “para-economy” are unresolved issues.

The challenge awaiting the incoming government of Santos, who takes office Aug. 7, will be to uncover the para-economy.

“The para-economy is not the money of the paramilitaries, but rather the economic networks that have benefitted, in their business dealings, from the political and paramilitary violence, in which sectors of the legal economy are also involved,” González told IPS.

The sectors that benefited most are agro-industry, finance and mining, according to historian Jaime Zuluaga, spokesperson for the Permanent Assembly of Civil Society for Peace.