HURGHADA, Jul 14 2010 (IPS) - Egypt’s Red Sea resort cities have grown up in the shadow of oil development, but with tourism booming and the country’s oil reserves drying up, many stakeholders think it is time to exorcise the oil spectre. 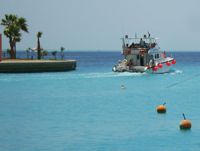 “Investing here is not for the weak-hearted,” says Kamil Sedky, owner of a beach hotel in Hurghada, 500 kilometres southeast of Cairo. “We’ve spent 30 years building a tourism industry around our world-class beaches and coral reefs, and one oil spill could destroy everything.”

Historically, the richest petroleum deposits were in the northern half of the gulf, but as the reserves were exhausted oil companies ventured further down the coast in search of more productive fields. The southward creep of offshore concessions has brought oil platforms uncomfortably close to some of Egypt’s most popular tourist resorts.

Offshore oilrigs now operate less than 70 kilometres from El-Gouna, a glitzy beach community with 35,000 permanent residents. Platforms are also within striking distance of Hurghada and Sharm El-Sheikh, which collectively boast over 90,000 hotel rooms and provide jobs for half a million Egyptians.

The meteoric growth of these coastal resort cities over the past 30 years is owing to their stunningly clear waters and the world-class dive sites that lie just offshore. While decades of oil mishaps have destroyed reefs and blackened beaches in the Gulf of Suez, the remainder of Egypt’s Red Sea coast boasts one of the world’s most diverse, and fragile, marine ecosystems. The vibrant coral reefs and myriad of small islands are home to over 1,100 species of fish and provide valuable habitat for sea turtles and migratory birds.

Tourism has a strong interest in protecting this marine ecosystem, asserts Sameh Howaidek, a board member of the Red Sea Investors Association. “If the beaches or sea are ruined, we’re out of business.”

Investors have sunk billions into developing Egypt’s ‘Red Sea Riviera’. But the fragility of this investment was emphasised last month when a small oil spill fouled over 20 kilometres of coastline, including a dozen hotel beaches in El- Gouna and Hurghada. The black sludge also covered several coral reefs and washed up on Tawila Island, a protected sanctuary for marine birds.

The spill was quickly cleaned up, but the incident left questions about the risk parameters and transparency of the government vis-a-vis the oil sector.

“We heard nothing from the government or on TV about the spill,” says Mohamed Nassef, a local dive shop manager. “Now it seems they’re trying to cover up the source of the leak to protect the company responsible.”

“Of course oil is very important to the economy,” he told IPS, “but if you compare the revenue generated by the tourism and oil sectors, tourism’s contribution is more than double.”

Over 12.5 million tourists visited Egypt in 2009, generating 11 billion dollars. While the tourism sector is growing steadily, oil production has been falling since 1993. The country’s maturing oil fields require increasingly more effort to tap, resulting in diminishing returns and a greater risk of environmental damage.

“These are secondary concessions — they’ve all been explored before,” says Amr Ali, managing director of the Hurghada Environmental Protection and Conservation Association (HEPCA), a local NGO for marine conservation. “These guys are given the concession informed that the wells are not producing, so they are using every possible method to reduce the costs.”

He charges that oil firms are employing recycled equipment and antiquated platforms that are more prone to failure. Smaller operators, such as the one believed responsible for last month’s spill, present the greatest risk as they have fewer resources to combat a spill.

Amateur video posted to YouTube of an oil slick that appears to originate at a rig near Hurghada shows no booms to contain the leaking oil.

Oil and water don’t mix, says Howaidek. “Tourists come here for the beaches and the sea. If you want to give concessions for oil, they should be far removed from these areas.”

Egyptian oil minister Sameh Fahmy recently said he would consider reducing the number of rigs operating in the Red Sea, but has not disclosed any plan to reorganise the zoning.

“Why are we playing Russian roulette with our environment and economy?” says a Hurghada-based dive boat operator.