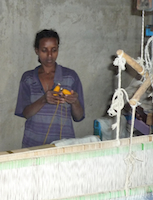 If she had been raised in her new home in the village of Awra-Amba, instead of being the 18-year-old mother of three, Fantaye would be single for at least another year.

Dewaye Masresha, her 35-year-old husband, brought the family to Awra-Amba six months ago and they now live by the community’s principles.

And today it is only in Awra-Amba, a utopian community of over 400 people in a poor rural village 700 kilometers north of the capital, Addis Ababa, that the code is strictly observed. In other rural areas of the country, girls as young as nine continue to be married off to older men.

A haven for women

“This community is a haven for women,” said the reserved and shy Fantaye, holding her year-old son while working alongside her husband in the community’s cotton weaving plant – the main source of the community’s income.

“These people have developed their own values and we know all members observe these values voluntarily,” Zelalem Getachew, Public Relations Officer with the Amhara Regional State Women’s Affairs Bureau, told IPS.

The Bureau takes members of Awra-Amba to other communities in the region as part of its campaign for gender equality.

“Having Awra-Ambans talk about their lives has proved much more effective than the Bureau’s formal awareness campaigns to change the attitudes of other communities towards gender roles,” said Zelalem.

According to the Bureau, Awra-Amba’s “no early marriage” principle has positively impacted lives of community women by protecting them from fistula and other health complications, especially those related to maternal and child health.

In rural communities where mothers give birth at home for lack of proper health services, the older first-time mothers in Awra-Amba avoid many of the complications associated with childbirth by young girls.

“We don’t have researched records to compare, but we don’t hear as many cases of maternal death due to birth complications in Awra-Amba as we do from other places,” Getachew told IPS.

“The immediate effect of early marriage is that girls automatically drop out of school. But Awra-Amba’s practice means many more stay in school,” said Zenaye Tadesse, chief of the Ethiopian Women Lawyers Association – the largest gender rights activist group in the country.

“Marrying later also mean that girls are protected from psychological problems they would suffer as a result of being kept alone when they should be in school and playing with their friends”.

The community’s principles are not the result of gender advocacy, government policy or academic development. For them, these are simply “Godly and righteous virtues”. Awra-Ambans believe that all humans are intrinsically equal.

“Femininity is for my mother and masculinity is for my father. But both are humans,” Zumra Nuru, the 63-year-old founder of the community told IPS. “As a child, I used to ask whether my mother had extra strength that her tasks didn’t end when she returned home from day-long farm work with my father.”

Zumra was inspired to develop a set of values against established norms around him. While some people regarded him as “mad”, others joined him to form this unique community in the mid-1990s.

Women in particular are feeling the benefits of the community’s resistance to the outside world’s discrimination and ridicule of their way of life.

The protection of women and enforcement of principles of gender equality are not limited to minimum age requirements for marriage. Women and men participate equally at household and community level; jobs are assigned simply by efficiency. The community’s income comes mainly from cottage industries.

Birtukan Kibret (32), was born and raised in Awra-Amba and is the community’s tour guide. Her life couldn’t have been more different from Fantaye’s. When she arrives home at the end of a busy workday, her husband, Muluneh Alemu, has dinner ready for their family of five.

For Birtukan, gender equality does not mean holding hardcore views about some causes however good they may be. “It is about sharing the burden in a family,” she said. “Though my husband is a good cook, I sometimes do cooking voluntarily for I don’t want to make it hard on him.”

Equality is more about attitude than tasks,” Birtukan told IPS.

Domestic violence against women and children is strictly forbidden and one of the 13 committees set to ensure a healthy community and family life looks over such matters.

According to Birtukan, if there are incidents of domestic violence, the committee condemns the offender and may enforce divorce. “Offenders with continued records and new entrants to the community who fail to adhere to our principles are forced to leave.”

Other communities have seen the benefits of such an equal society and are emulating Awra-Amba’s way of life.

Influential representatives from the Awi – a larger rural community in north-western Ethiopia – visited Awra-Amba in 2007 and have since set up a replica of this utopian society some 100 kilometers away.

On their own initiative, the Awi have applied these values, which include hard work, and are now harvesting the benefits,” said Getachew.

The Awra-Ambans have also become key resources in educating Bureau experts and local women’s affairs officials to enable them carry out their jobs effectively.

People, mainly educated ones, are recognizing our values,” the proud founder of this unique society told IPS.